From birds to chipmunks, wildlife scrambling to harvest seeds

Samaras were helicoptering down and everyone was scrambling to get them. As ponderosa pines develop seeds in cones, a long wing is attached that slows their descent through the air. Poets say this is to amuse the children while ecologists tell us that a longer descent time increases dispersal distance of seeds. Another consequence is that the twirling seeds are visible from a considerable distance and many come to harvest. 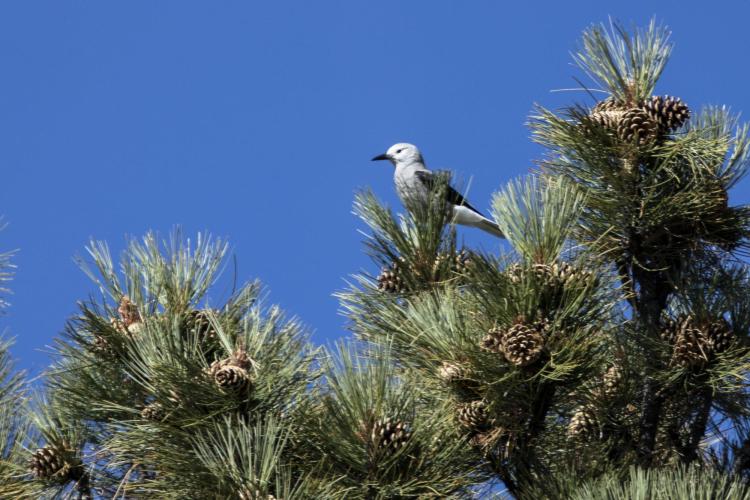 Clark’s nutcracker is known to be a specialist on whitebark and limber pines, but it also caches seeds from ponderosa pine. Click here on on photo to see larger image. Photo by Jeff Mitton.

Seeds dawdled through the air as I set up my tent at Ponderosa Campground above Blue Mesa Reservoir in the Curecanti National Recreation Area. It was really quite entertaining. The pines at this campground are large and stately, and this year each tree had several hundred cones, each cone with 40 to 70 seeds. Very soon I noticed that I was not the first to be entertained by the spectacle.

A multitude of pine siskins was moving among cone clusters and, although the small birds were not always visible, rustling needles and swaying cones betrayed their activity. They deftly pried seeds from cones and either ate them immediately or tucked them into their crops to be eaten during the long, chilly night. Pine siskins are seed generalists and they harvest seeds from almost all conifers. Because they may move great distances to find good cone crops, they do not cache seeds.

Raucous Clark’s nutcrackers were less numerous than siskins, usually three or four birds on site at any moment, but more apparent, standing on top of the cones while removing seeds with quick jabs of their bills. Nutcrackers were filling their crops with seeds, and it is known they can carry 50 of the much larger limber pine seeds, so they were probably loading up 100 or more. Birds flew off site to cache their seeds and then returned to continue their harvest. This was a treat for me — I had watched them harvest seeds from limber pines but was not convinced that they harvested and cached ponderosa pine seeds.

Steller’s jays were also present, and to my surprise, taking seeds. I knew that they ate eggs, nestlings of other bird species, insects and whatever food they could steal from humans, but was not aware they harvested conifer seeds. From my background reading for this column I learned that they, too, cache seeds.

Cedar waxwings take juniper berries when they are available, but one waxwing was taking seeds from the cones.

"In years with few or no ponderosa seeds, these animals must move to sites where seeds are plentiful, or find alternate food sources, or do without."

They must have fallen everywhere, but the samaras were most apparent on the bare ground of the dirt road and campsites. A lone chipmunk scurried frantically, stuffing its cheek pouches so full of seeds it looked like it had a terminal case of the mumps. I presume it was hoarding them underground, for it collected seeds all day.

Vocalizations from the trees revealed the presence of tree squirrels. I soon saw several gray squirrels and noted that they were clipping twigs with needles and cones and dropping them onto the dirt road for easier seed extraction. Although I did not see it, at least one of those irritating pine squirrels repeatedly scolded me for invading its territory. The pine squirrels bury cones and seeds in larderhoards in the forest. Larderhoards are deep piles of duff, needles and twigs, usually assembled in thick stands of conifers. I have seen pine squirrel larderhoards 30 feet in diameter and 2 to 3 feet deep.

This fall puffs of samaras drifted from ponderosa pines and the animals gobbled and cached, but it isn’t always so. Mast years, or bumper cone crop years, are interspersed among years with many fewer cones and some years with virtually none. So in years with few or no ponderosa seeds, these animals must move to sites where seeds are plentiful, or find alternate food sources, or do without. The food webs of these birds and mammals change erratically from year to year.

An amplectic pair of treehoppers, Telamona monticola, was on a CU sidewalk beneath a swamp oak tree, Quercus bicolor. I surmised that they tumbled from the tree while delicately adjusting their positions. I collected the treehoppers to photograph them and 7 hours later they were still amplectic. END_OF_DOCUMENT_TOKEN_TO_BE_REPLACED

Two factors suggested that this spring and summer would witness extraordinary blooms of wildflowers on... END_OF_DOCUMENT_TOKEN_TO_BE_REPLACED

Pinedrops parasitizes the mycorrhizal fungus directly, stealing water, minerals, carbohydrates and nutrients, but supplying nothing in return. In effect, it parasitizes a mutualism after germinating in the grasp of a fungus. END_OF_DOCUMENT_TOKEN_TO_BE_REPLACED
Categories:
Tags:
Return to the top of the page