The sight of the leaves is breathtaking, and so is the knowledge that in a stand of aspens you are walking through a single individual connected underground

Fall is arguably the finest season in Colorado. The air turns clear and crisp, balmy days contrast with chilly evenings and fall colors sweep through the mountains.

In the foothills, smooth sumac leaves and fruits turn brilliant red, fragrant sumac assumes colors from yellow through somber reds to purple and grasses turn yellow to russet, depending on species. Plains and narrowleaf cottonwoods illuminate creeks and rivers with golden light. But most fans of fall colors drive and hike to see quaking aspen.

This year, aspen’s colors did not occur at the same time as in recent decades. Perhaps wet winter and spring weather, followed by dry, lingering summer days delayed the recycling of photosynthetic pigments by about 10 days. Accordingly, I delayed my camping trip to the Ruby Mountains and San Juan Range and found bright colors in all destinations. Several days immersed in fall colors gave me time to enjoy aspen and to recall that only superlatives can describe its natural history.

Several days immersed in fall colors gave me time to enjoy aspen and to recall that only superlatives can describe its natural history."

Quaking aspen is the most widely distributed tree in North America. Its native range extends from the mountains of central Mexico to the Brooks Range in Alaska, and from the Pacific to the Atlantic coasts. It grows from sea level at the Beaufort Sea, the Atlantic Ocean and the Pacific Ocean to 11,300 feet on Niwot Ridge in Colorado.

Aspen’s immense geographic and elevational ranges place it in a wide variety of plant communities. It grows intermixed with ponderosa pine, Douglas fir, lodgepole pine, Engelmann spruce, subalpine fir, limber pine and bristlecone pine. Aspen frequently grows beside lakes and streams, but it also grows in arid habitats such as those dominated by sagebrush or Gambel oak. 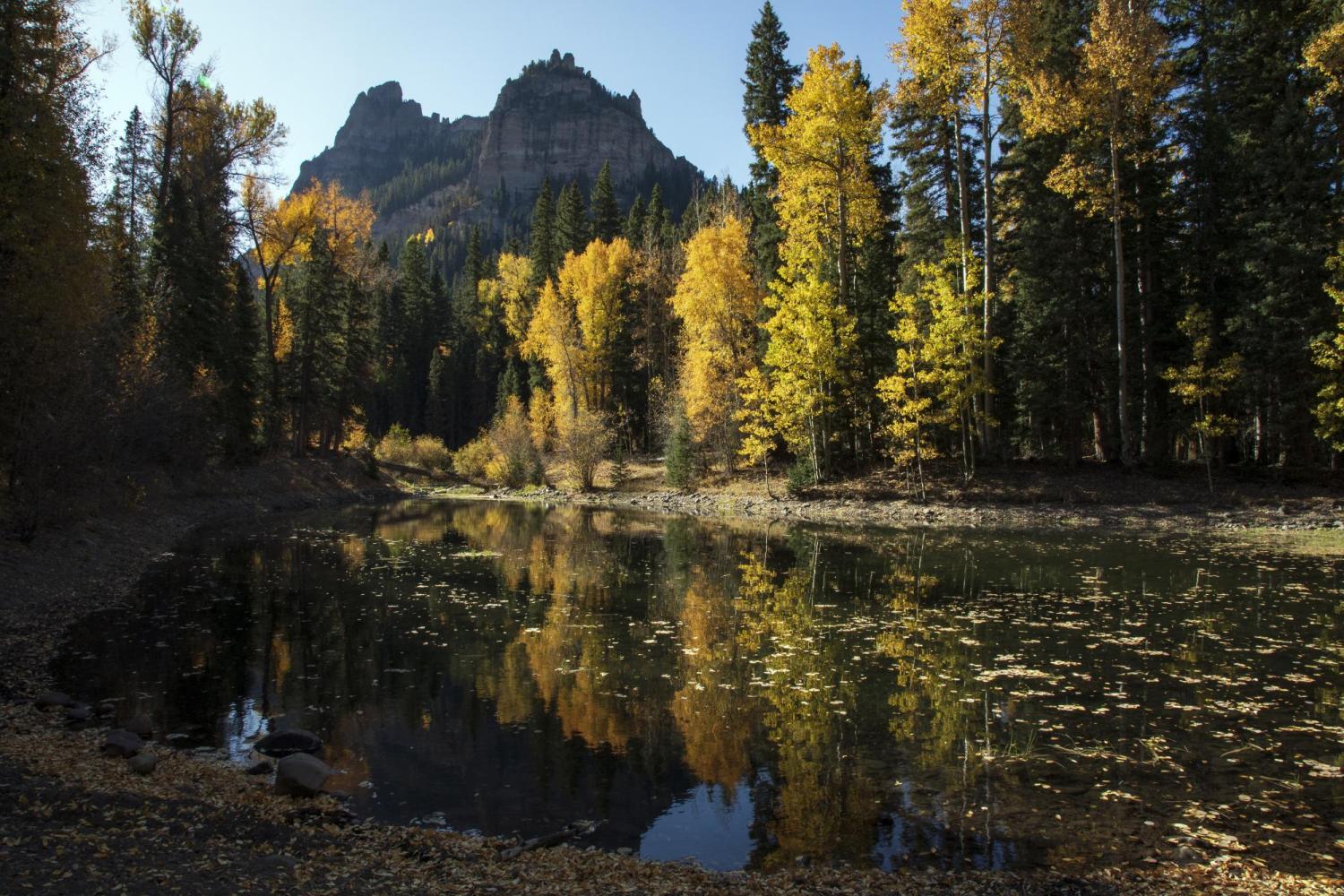 At the top of the page is an image from Kebler Pass in western Colorado; it shows clonal structure of aspen stands that becomes apparent in fall. Above, fall aspen shimmer in the sun and in a reflecting pool in the Cimarron Valley in Western Colorado. Photos by Jeff Mitton.

As a consequence of living in both a broad geographic range and also a wide range of environments, aspen has the highest level of genetic variation of any plant species. This estimate is based on soluble enzymes, and it is possible that estimates based on measures of DNA markers might anoint a different species as most variable. Nevertheless, aspen has immense genetic variation that adapts local populations to their specific environments.

Aspen has photosynthetic bark. One manifestation of this unusual characteristic is that aspen can have white, green or tan bark. The different colors are produced by different concentrations of chloroplasts in bark cells. Green and tan bark both have higher concentrations than white bark. After the leaves fall, bark continues photosynthesis so that tan and green aspen produce leaf buds earlier and leaf out earlier in spring.

Aspen can reproduce either sexually or asexually. Aspen are either male or female, and their genders can be identified in spring by examining their catkins (pendulous spikes of flowers) for either anthers or pistils. The pollen is carried by wind and the females produce numerous, tiny seeds lofted by long white hairs in the wind, just like their close relatives the cottonwoods. Aspen in moist eastern deciduous forests reproduce predominantly via seeds. Asexual reproduction is more apparent in dry habitats, such as those here in Colorado. Aspen’s shallow root system can push up small shoots that remain attached to, and are nourished by, the root system. This form of reproduction produces stems, called ramets, that appear to be separate trees. But because a shoot is connected to neighboring ramets by its root system, they are not separate individuals, but a single individual called a clone. This asexual process is called suckering.

Clonal structure of a large stand of aspen can be detected by noticing differences in bark color, variation in the angle that branches join the trunk, leaf size, black flecking on the bark, the time that buds open in spring and both the timing of fall colors and the colors that the leaves develop. It is not uncommon to see one clone that has completely dropped its leaves while the adjacent clone still has green leaves. In the photo illustrating this column, some clones are solid green, some are green mixed with yellow, some are brilliant gold and one or several clones are red.

A clone can be tiny, with just a few ramets, or large, with thousands of ramets. The largest living organism, or more precisely, the heaviest organism, is a clone of quaking aspen that weighs approximately 6,600 tons and covers 106 acres at Fish Lake in Utah. This clone was named Pando (Latin for “I spread”) by my colleague, Michael Grant, for aspen’s propensity to spread by suckering.

Walking through a stand of aspen, with its attractive trunks and animated, trembling leaves, is a real pleasure. But awareness of the extensive root system beneath your feet that connects all the ramets around you as well as the leaf canopy above brings the profound realization that you are walking through a single individual.

An amplectic pair of treehoppers, Telamona monticola, was on a CU sidewalk beneath a swamp oak tree, Quercus bicolor. I surmised that they tumbled from the tree while delicately adjusting their positions. I collected the treehoppers to photograph them and 7 hours later they were still amplectic. END_OF_DOCUMENT_TOKEN_TO_BE_REPLACED

Two factors suggested that this spring and summer would witness extraordinary blooms of wildflowers on... END_OF_DOCUMENT_TOKEN_TO_BE_REPLACED

Pinedrops parasitizes the mycorrhizal fungus directly, stealing water, minerals, carbohydrates and nutrients, but supplying nothing in return. In effect, it parasitizes a mutualism after germinating in the grasp of a fungus. END_OF_DOCUMENT_TOKEN_TO_BE_REPLACED
Categories:
Tags:
Return to the top of the page