The atmosphere was once thought to be effectively infinite, but now we know that natural and industrial emissions from one continent can be seen and felt on distant continents

As dusk gathered the warmth of an early fall day was dissipating into a nearly cloudless sky. From my campsite at Teal Lake in the Park Range, I had a good view of the sunset. After the last direct sunlight warmed tiny clouds to glowing crimson, the light began to fade.

But then the light changed to a truly unusual hue, provoking me to murmur, “My, that sky is purple!”

I had anticipated and hoped for this light show, for I had seen a brilliant red sky followed by a purple glow eight days earlier, in the San Juan Mountains. Shortly after my return from the San Juans, the evening news had a feature on the recent strange colors seen in sunsets and sunrises.

Researchers found that some layers had concentrations of sulfur 20 times higher than normal—the signature of a recent volcanic eruption."

Brian Toon, in the Laboratory of Atmospheric and Space Physics (LASP) at CU Boulder, identified the cause of the light shows as sulfur dioxide and ash from an eruption of Raikoke Volcano, in eastern Russia, on June 22.

To investigate the cause of the sunset colors, a team of LASP physicists, led by Lars Kalnajs and including Doug Goetz, had released a balloon on Aug. 28 to sample gases and particulates in the stratosphere.

They found that some layers had concentrations of sulfur 20 times higher than normal—the signature of a recent volcanic eruption. Ash and gases from Raikoke, on the Kamchatka Peninsula in eastern Russia, were now distributed over Wyoming, most of North America and perhaps all of the northern hemisphere. 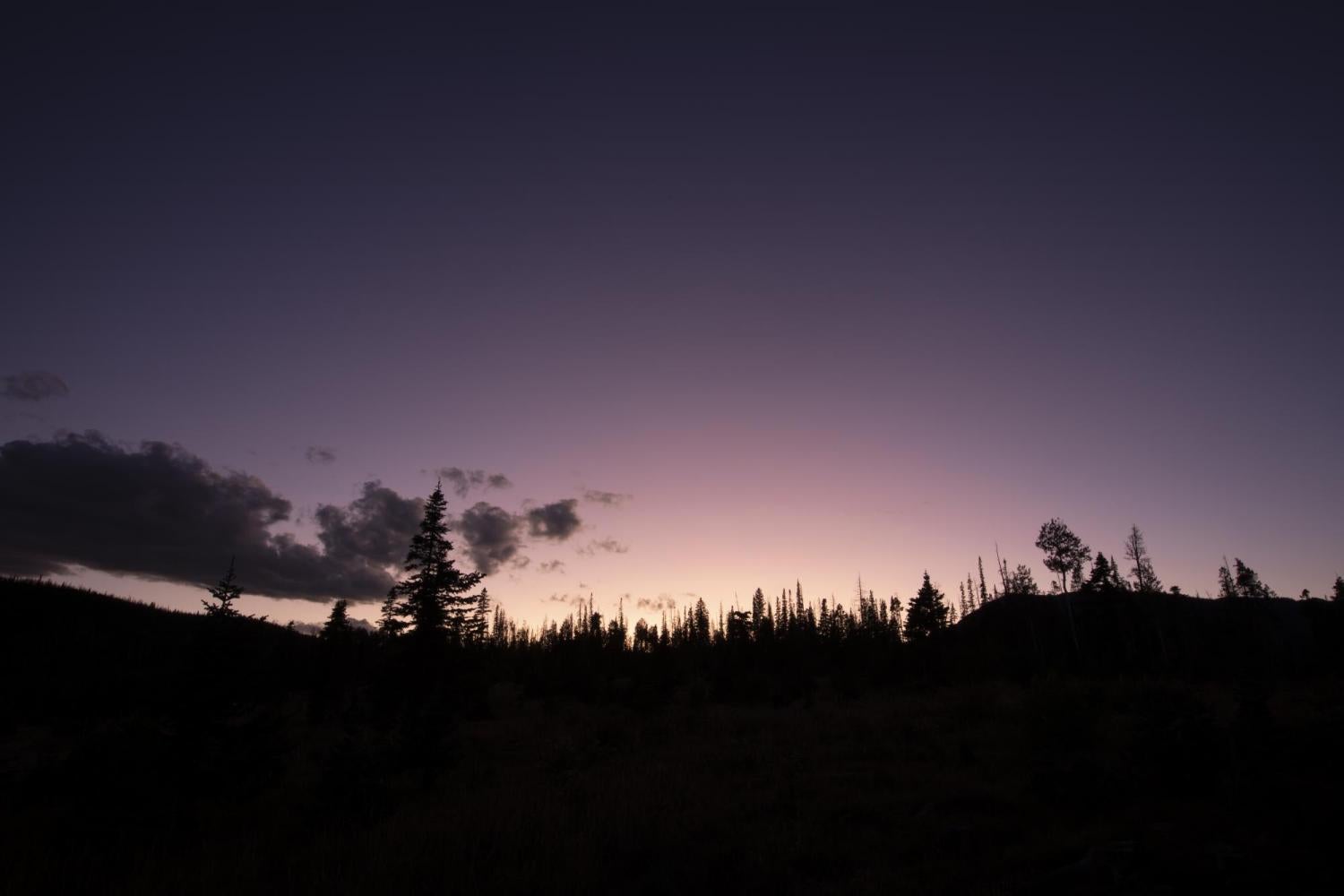 A purple sunset seen in the Park Range was followed by a purple sunrise the next morning. Photo by Jeff Mitton.

Strong stratospheric winds, which can reach 120 to 150 miles per hour, distribute ash and sulfur great distances. Ash and sulfur slowly settle out of the stratosphere, and at the same time the sulfur dioxide is transformed to tiny droplets of sulfuric acid—literally acid rain.

Ash and sulfuric acid droplets scatter incoming sunlight, changing the distribution of wavelengths of visible light, or colors, that reach observers on the ground. This can get complicated, by my simplification is that ash, like smoke from forest fires, can enhance the amount of red in the sunset.

Acid droplets, interacting with the absorption of light by stratospheric ozone (three atoms of oxygen, rather than the more stable form with two) can increase the amount of blue. Blue and red, when mixed in various proportions, form a continuum of violet, lavender and purple.

Because ash and acid enhance colors very high in the atmosphere, their glows tend to appear after the more familiar sunset colors have faded, when the lower atmosphere is no longer receiving direct sunlight.

The light show over Teal Lake was a fascinating phenomenon combining geology, chemistry and physics, and it revived some memories. Raikoke was only a moderate volcanic event, minor in comparison to many preceding events that have shaped history. Two examples come immediately to mind.

Mount Tambora, on the island of Sumbawa in Indonesia, erupted in 1815 so violently that it could be heard on Sumatra, 1,600 miles away. It continued to spew ash and sulfur for the next three years, draping a persistent “stratospheric sulfate aerosol fog” over eastern North America that caused nearly total crop failures in New England.

The ash circled the globe, reducing the intensity of sunlight reaching the ground to such an extent that 1816 is referred to as “the year without summer.”

Payson Sheets, in the anthropology department at CU, worked with an international team to date the eruption of Ilopango Volcano in 539 CE in El Salvador, and to place it within an area of 7,700 square miles buried by three feet of ash that killed as many as 80,000 Mayans and displaced as many as 400,000.

This was a major disruption of the Mayan realm but Ilopango’s ash and sulfur also fell on both polar ice caps and caused (with contributions from two other volcanos) the coldest decade in 2,000 years, resulting in crop failures and famine in Ireland, Scandinavia, Mesopotamia and China.

My epiphany, triggered by a sunset but cumulating knowledge of volcanic calamities, industrial pollution creating acid rain and increases in methane and carbon dioxide resulting in climate change, is that all of humanity shares one atmosphere, once thought to be effectively infinite.

But now we know that natural and industrial emissions from one continent can be seen and felt on distant continents. Distant emissions become local visions and inhalations.

An amplectic pair of treehoppers, Telamona monticola, was on a CU sidewalk beneath a swamp oak tree, Quercus bicolor. I surmised that they tumbled from the tree while delicately adjusting their positions. I collected the treehoppers to photograph them and 7 hours later they were still amplectic. END_OF_DOCUMENT_TOKEN_TO_BE_REPLACED

Two factors suggested that this spring and summer would witness extraordinary blooms of wildflowers on... END_OF_DOCUMENT_TOKEN_TO_BE_REPLACED

Pinedrops parasitizes the mycorrhizal fungus directly, stealing water, minerals, carbohydrates and nutrients, but supplying nothing in return. In effect, it parasitizes a mutualism after germinating in the grasp of a fungus. END_OF_DOCUMENT_TOKEN_TO_BE_REPLACED
Categories:
Tags:
Return to the top of the page