Two factors suggested that this spring and summer would witness extraordinary blooms of wildflowers on the Colorado Plateau. First of all, blooms in California were so colorful and extensive that they were easily visible from space and they attracted hordes of people taking selfies amongst the flowers. In Colorado, average winter snowpack for the entire state was 7.5 times greater than last year, when drought conditions predominated. So I took my optimism and camera gear to the area around Capitol Reef National Park in search of color. 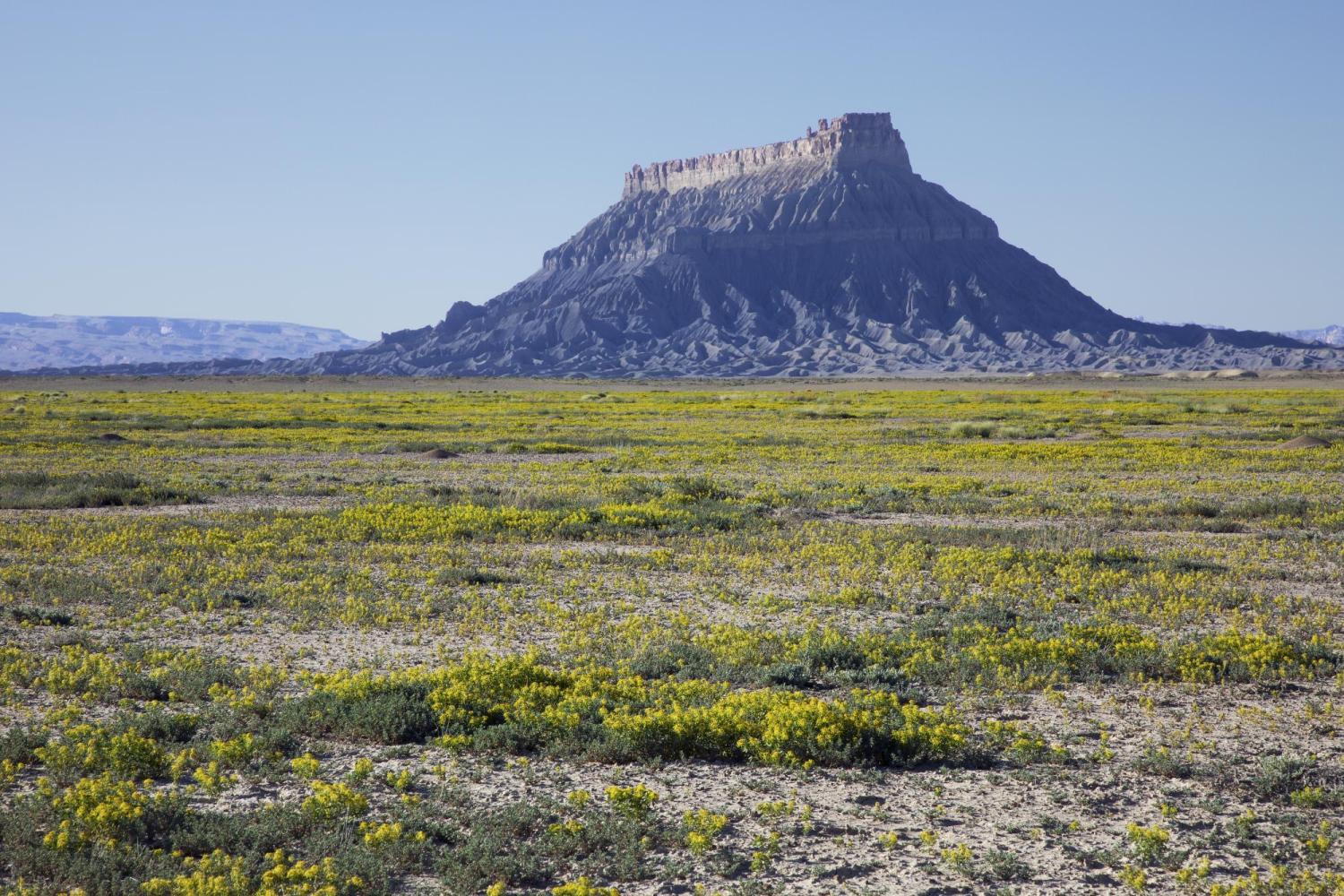 While driving along I70 from Grand Junction to Capitol Reef, a vast field of purple flowers appeared between the interstate and the La Sal Mountains. I had not seen a display like this, so I took an exit and traveled back to see the flowers more closely. The purple blooms were on scorpion weed, Phacelia crenulata, which is known for boom and bust years. The stand of rich purple flowers was more than a mile across.

I arrived at Factory Butte late in the afternoon to find a broad expanse of yellow flowers extending more than a mile from the base of the Butte to the south. These small plants were Rocky Mountain stinkweed, Cleomella palmeriana, which is both adapted to shale soils and known for boom and bust flowering years. Bright yellow flowers contrasted sharply with the dark, brooding, ornately sculptured Butte that loomed 900 feet above them. The previous year, during a serious drought, I did not see any blooms in this area, though I had seen a mass bloom here in May of 2014. Stinkweed is known to appear in dense populations in the spring following an unusually wet winter.

That night I camped to the north of Factory Butte, in an area of undulating hills of dark shale adjacent to the first uplifted plates forming the eastern boundary of Capitol Reef. By moonlight the area appeared barren, but as the sun rose it lit the tiny yellow flowers of desert trumpet, Erigonium inflatum, which created a frothy effervescence filling the stream channels. It was memorable, for these were the densest and most extensive stands of desert trumpet that I have ever seen.

After breakfast, I spotted valleys to the east of Factory Butte colored purple by strands of scorpion weed. I decided to walk across a large population of scorpion weed, but after walking more than a mile the periphery of the population was still not in sight. 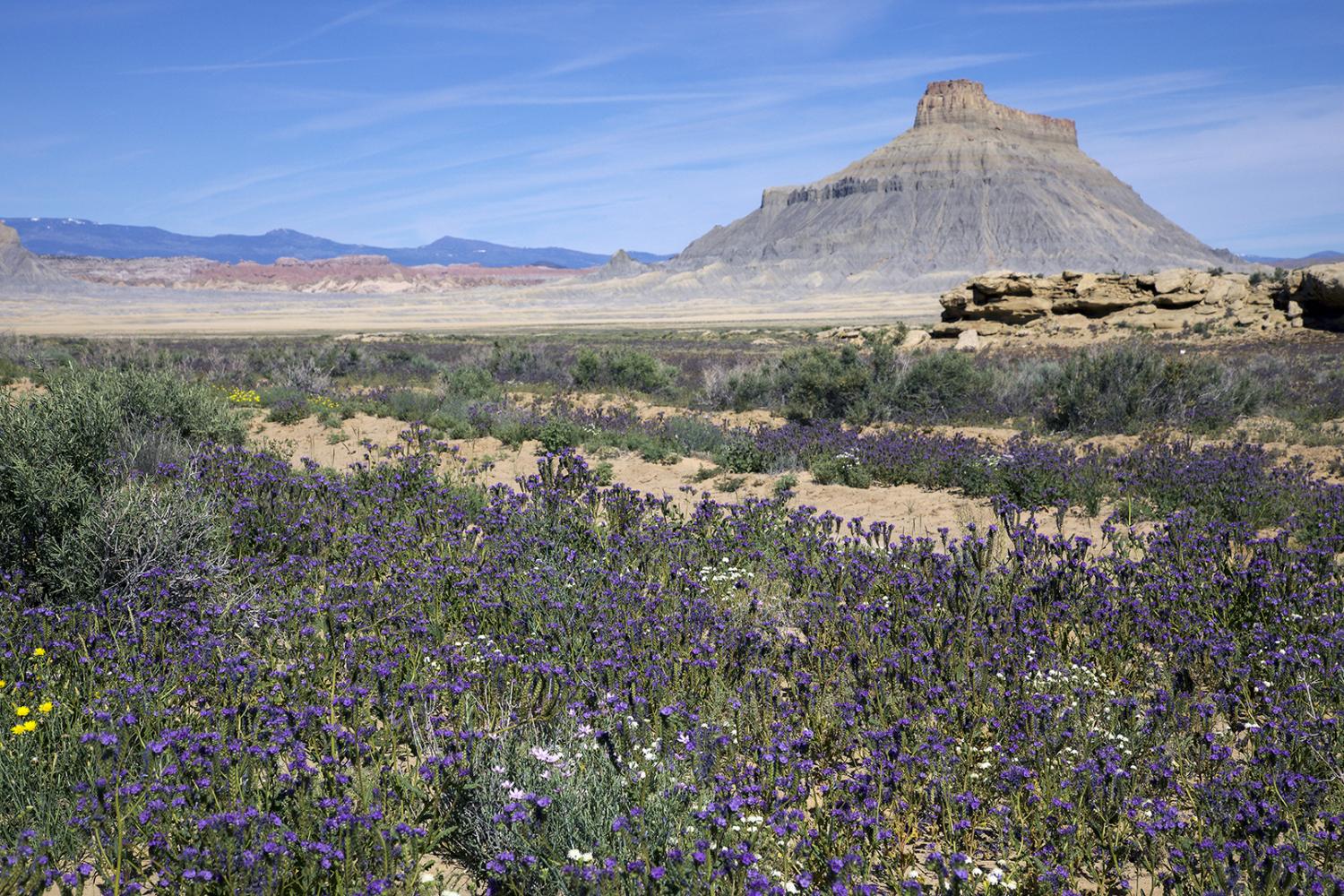 Not all carpets of purple were produced by scorpion weed. At the entrance to Goblin Valley State Park and in Cathedral Valley in Capitol Reef National Park, the glow of deep purple was produced by stands of dwarf lupine, Lupinus pusillus. Last year, at the same location near Goblin Valley, dwarf lupines were absent or rare.

Later that day I met a long-term, local rancher, Don Lusko, who had a ranch in the Henry Mountains. He said that the greatest stands of scorpion weed that he had seen in the last 50 years were near the lower edge of the pinyon pine forest in the Henry Mountains. He urged me to see them for myself, and when I got there, I scanned the area with binoculars and took photos with a 300 mm telephoto lens. Purple flowers extended for miles in all directions below the edge of the pinyon forest. But careful scanning also revealed that they grew in open patches between the trees, extending hundreds of feet higher in the mountains.

Stinkweed, scorpion weed, desert trumpet and dwarf lupine are all having banner years and a trait that they share is that they are annual plants. That is, plants seen in the summer were seeds in the soil in early spring. Abundant winter precipitation had triggered germination of many seeds, some of which had been waiting for years. While perennial plants must endure a drought year, seeds of annual plants can postpone germination until favorable conditions occur. Once in a great while, conditions are so salubrious that a super bloom appears.

An amplectic pair of treehoppers, Telamona monticola, was on a CU sidewalk beneath a swamp oak tree, Quercus bicolor. I surmised that they tumbled from the tree while delicately adjusting their positions. I collected the treehoppers to photograph them and 7 hours later they were still amplectic. END_OF_DOCUMENT_TOKEN_TO_BE_REPLACED

Pinedrops parasitizes the mycorrhizal fungus directly, stealing water, minerals, carbohydrates and nutrients, but supplying nothing in return. In effect, it parasitizes a mutualism after germinating in the grasp of a fungus. END_OF_DOCUMENT_TOKEN_TO_BE_REPLACED
Categories:
Tags:
Return to the top of the page