A group of people gather, laughing and joking, squirming in the late spring sunshine, to pose for a photograph. The crowd, filled with business attire and dark green jumpsuits alike, is celebrating the closing ceremonies of their class, including food and certificates, projects displayed along a wall, and an unusual setting: the Colorado Correctional Center in Golden.

The class, which is part of an organization called the Inside-Out Prison Exchange Program, mixes undergraduate students—“outside” students—with incarcerated individuals—“inside” students—as peers to foster broad discussions about social justice issues, like racism and sexism, with a diverse set of perspectives, leading to a life-changing experience for many students. Three outside students, including Gabrielle Moss (second to the left) joke with an inside student after the closing ceremonies. Photograph by Cay Leytham-Powell.

“What does this class mean to me?” Gabrielle Moss, an undergraduate at the University of Colorado Boulder and one of the outside students, pondered as she accepted her certificate at the closing ceremonies. “The first word that came to mind is ‘everything.’”

And Moss isn’t alone. The class provides students with an invaluable perspective of what is possible and of the broader world. Taught every spring by Joanne Belknap, an ethnic studies professor, the class is one of only three Inside-Out classes in Colorado—and the only one that is completely free for the inside students, thanks to grants and support by CU Boulder.

“I feel like this is the most important thing that I can be doing right now, offering this to some of our undergraduates, and to have these prisoners realize how smart they are, realize how great their ideas are,” said Belknap.

For many inside students, though, this can be a huge undertaking.

Getting a college-level education in prisons is difficult in the United States, thanks in part to a 1994 crime bill that was signed by then-President Bill Clinton. The bill banned incarcerated individuals from receiving federal student aid, or Pell Grants. While some states and colleges established funding for students in the form of the Second Chance Pell (SCP) Experimental Sites Initiative, many more—including Colorado—have not, leaving incarcerated students without any means of paying for an education unless they pay out of pocket, which is often impossible.

Funding prison education pays in the long-run. According to a RAND study from 2013, when incarcerated individuals participate in some sort of prison education, they are 40% less likely to reoffend, and due to this reduction in recidivism, save taxpayers an average of $5 for every $1 spent.

Part of a national program

The Inside-Out Prison Exchange Program provides a way for incarcerated individuals to receive an education that they otherwise might not.

This program, while sponsored locally by CU Boulder, is part of an international program that has its roots in 1995 when a criminal justice professor at Temple University, Lori Pompa, took 15 undergraduate students to the State Correctional Institute of Dallas, Pennsylvania. Together with incarcerated individuals, they discussed racial, economic and political policies and other criminal justice topics.

At the end, everyone was so engaged in conversation that no one wanted to leave, and that was when the idea struck in the form of a student. What if this was expanded out over a whole semester?

I feel like this is the most important thing that I can be doing right now, offering this to some of our undergraduates, and to have these prisoners realize how smart they are, realize how great their ideas are.

Today, the Inside-Out Prison Exchange Program has spread to more than 150 higher education institutions in 46 states and 11 other countries, and is still growing.

The program began at CU Boulder when a colleague mentioned it to Belknap, a criminologist, who was immediately interested and signed up for the week-long Inside-Out training.

“You get trained by her (Pompa) and some other people who have taught the programs that are really good, and then you get a bunch of your training actually in a prison with prisoners who’ve taken a bunch of Inside-Out classes, and it’s amazing. I feel like even if I’d never been able to implement it when I came back, it made me a better professor in the classroom,” Belknap said.

Implement she did, though. Belknap has now taught the social justice class three times, first at an all-women’s prison, and the past two years at the Colorado Correctional Center, an all-men’s facility. Each year, the inside and outside students have to read about and have tough conversations on topics like pornography, racism and transphobia, write papers and work together on group projects.

“As much as the inside students get things out of the program, the outside students get even more because it’s more likely to really shatter their views of a lot of things. It makes people feel differently and really see how human people are, regardless. And for a professor it’s an amazing thing,” said Belknap.

For many students, the program is a humbling experience where they learn not only about significant societal issues, but also about themselves.

Moss, the CU Boulder student, said that she had never taken a class with people from so many different backgrounds and was able to learn first-hand from the inside students about their lives and experiences.

“You could frame it, like, yeah this made me a better leader, but I definitely I think I just became a better human,” Moss said. “I wouldn’t want to frame it to be any other thing than just being a bigger opportunity to get to know the people that are in incarceration, and the injustice that’s happening in our nation, and get to hear it first-person, and build a relationship with the people that are highly stereotyped and feared the most of, I think, when, really, they’re just people. They’re good people.” 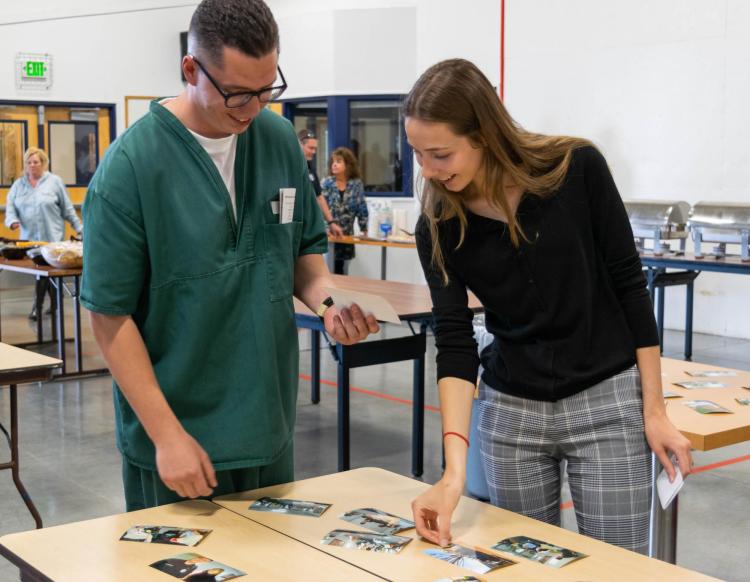 An inside student and outside student look at photographs taken of the class. Photograph by Cay Leytham-Powell.

Despite their diverse backgrounds, the inside students all echoed Moss’ sentiment: this class gave them perspective—and meaning.

“This class was the only time during incarceration that I was able to interact and have these types of conversations because people often have a different view of you because you’re in green,” commented Peace*, an inside student.

Holt, another inside student, agreed: “This class made me realize my worth as a person … It taught me that what I had to say was important; that I’m important.”

And for Belknap, who has studied and researched the prison system for years, this is one of the best parts of the program.

“I can’t tell you how rewarding it is when people start reframing how they’re seeing themselves,” she said.

The path to the class is different for each student. For the outside students, they may have taken one of Belknap’s classes where she talked about the program and decided to apply and interview to take part in the class.

For the inside students, they may have been brought by a desire to learn in an intellectually stimulating environment or to gain perspective on the broader world and current topics, such as sexism, racism or oppression.

“I took the course to get a better understanding of sexual orientation. It’s not a big thing on the streets, and I mean we have our own judgments, but I wanted an open mind about it. I wanted to understand, respect what they believe,” said Gonzalez.

One inside student, Jones, didn’t even want to join the class, but David Russell, the prison’s education coordinator, enrolled him in the class anyway. Jones, though, is thankful. “The class turned out to be one of the best things for me.”

For many students, Belknap was key to the class success.

“A good teacher makes all the difference in the world, and that is Joanne,” said Cochran, another inside student.

“I think she was the glue to our class. I wouldn’t have had it any other way,” said Moss.

The Inside-Out Prison Exchange Program at CU Boulder is not supported by taxpayer funds. Rather, Belknap received support from Continuing Education’s Extraordinary Program, which accommodates the unique needs of academic units including special student populations, customized schedules and specific financial arrangements. Thanks to this program, inside students take the class for a reduced rate and receive academic credit. The inside students’ reduced tuition is then paid for through a CU Boulder Outreach Award. 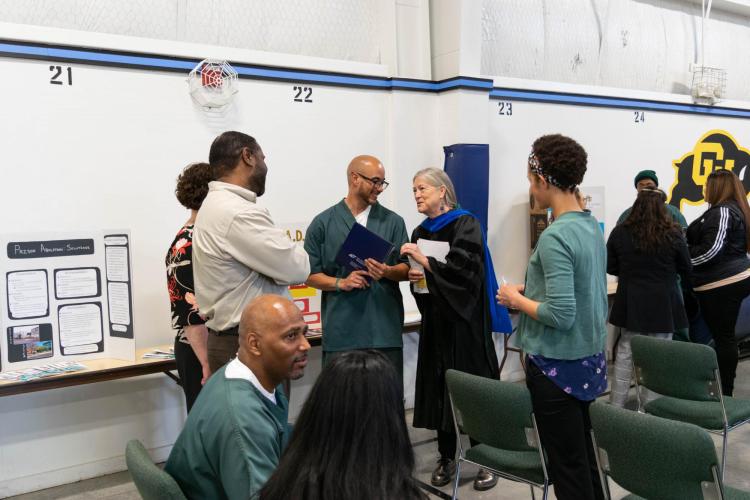 Professor Joanne Belknap talks with an inside and outside student after the closing ceremonies. Photograph by Cay Leytham-Powell.

According to Silvie Kilworth, the director of the Extraordinary Program, the program often allows faculty to pursue their individual passions.

“I think the Inside-Out Program provides opportunity for students, both Inside and Out, to learn with others who may be different from them and who can provide diverse perspectives. I can’t imagine a better way to encourage students to challenge their assumptions about our society and promote their growth, both as students and citizens,” said Kilworth.

Sara Thompson, the dean of Continuing Education at CU Boulder, echoed that sentiment in the keynote address she gave at the closing ceremonies: “This program is a model for the type of outreach and engagement that brings together the resources of the university and our residents in order to offer innovative learning experiences that provide service to the state and Colorado residents.”

“It is an honor to support this program.”

And Belknap is grateful. “They have just been so supportive of this and way more than most universities are.”

Back at the closing ceremonies, families and friends gathered, leaning their heads close together, smiles and tears on many faces, as they enjoy the last moments together.

Peace looks around at the room. “I wish there was a part two.”

* = Given privacy concerns, all inside students are being referred to by only their last names. 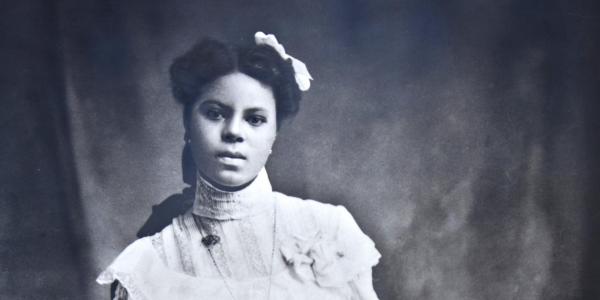 Tipped off by a newspaper story, Polly McLean spent more than a decade exhuming Buchanan’s story and, finally, correcting history. For decades, CU's official history stated that the first black woman to graduate from CU earned her degree in 1924. But that was wrong. END_OF_DOCUMENT_TOKEN_TO_BE_REPLACED

The Old Main Cottonwood is indeed getting new life. In October, cuttings were taken from the canopy of the tree by Facilities Management arborists Aquino and Joel Serafin. END_OF_DOCUMENT_TOKEN_TO_BE_REPLACED

This summer, undergraduate students Max Wasser and Grace Kendziorski are spending time hiking in the mountains—and trapping pikas and counting flowers. They are participating in the Research Experiences for Undergraduates program at CU Boulder. END_OF_DOCUMENT_TOKEN_TO_BE_REPLACED
Tags:
Return to the top of the page