Chickadees that live among us are precious neighbors, for they have much information to share in exchange for a spiffy nest box

Beginning in the fall of 2018 and continuing today, a large number of bird boxes have appeared in Boulder, near Sugarloaf Mountain and at CU’s Mountain Research Station. The Boulder Chickadee Study is a collaborative, long term effort between Kathryn Grabenstein, a PhD candidate in ecology and evolutionary biology at the University of Colorado Boulder, and her thesis advisor, Scott Taylor, to examine hybridization between black-capped (Poecile atricapillus: hereafter BCCH) and mountain (P. gambeli: hereafter MOCH) in the context of landscape disturbance. 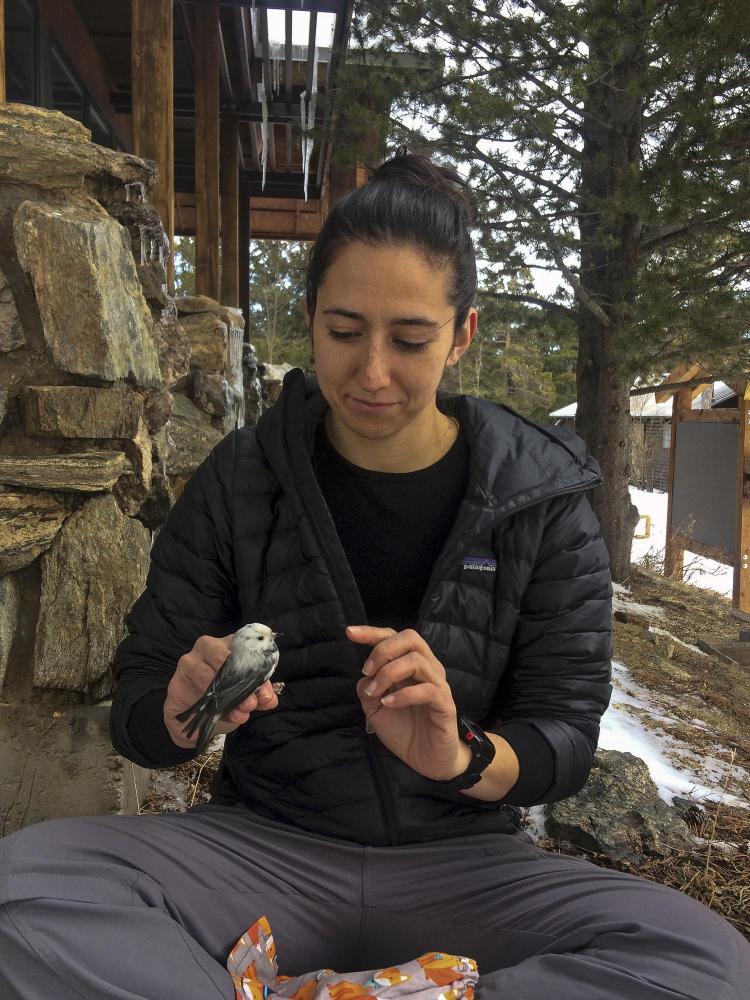 Kathryn Grabenstein, one of the designers of the Boulder Chickadee Study, holds a chickadee with an odd phenotype at the Mountain Research Station. Photo by Katherine Feldman. At the top of the page, one of the chickadee study nest boxes is shown near Macky Auditorium. Photo by Jeff Mitton.

Nest boxes of unfinished wood have the emblem of the Boulder Chickadee Study and a unique number emblazoned on the sides of each nest box.

Studies of hybrid zones provide a wealth of ecological and evolutionary data, including information on the limits of species’ distributions, the interactions between species, and how distributions and interactions change in response to habitat disturbance or climate change. For example, a study of the hybrid zone between black-capped and Carolina chickadees documented both the dynamic nature of a hybrid zone and its dramatic response to climate change. Hybrids in the narrow hybrid zone in Pennsylvania have lower viability and lower reproductive success than either parental species. As temperatures rose, the hybrid zone moved seven miles to the north in just 10 years.

Much of what we know of hybridization between BCCH and MOCH comes from a study in British Columbia. MOCH generally occur in conifer forests at higher elevations, while BCCH occur most frequently in deciduous forests at lower elevations, frequently along streams or rivers. However, forestry practices in British Columbia have produced a mosaic of conifer forests with inclusions of deciduous trees, most frequently aspen, cottonwoods and alders. This landscape disturbance increases interactions and hybridization between these two chickadee species. In a variety of interactions, BCCH are dominant to MOCH.

Among chickadees, genetic studies have shown that approximately one-third of nests have one or more chicks not sired not by the male at the nest (i.e., are extra-pair young). In British Columbia, hybrids usually have a BCCH male parent in a nest maintained by two MOCH adults.

I find it easiest to distinguish our local chickadees by the solid black cap of BCCH versus the distinct white “eyebrow” stripe above the eyes, meeting just above the beak. BCCH have white wing bars and buff patches on their sides, both less noticeable in MOCH. Hybrids may have very thin or interrupted eyebrows that do not meet above the beak, and variable expressions of white wing bars and buff patches. These differences can be subtle, so identification is uncertain without genetic data.

The Boulder Chickadee Study will band chickadees so that they can be followed in the future and blood samples will be taken to acquire extensive genetic data to describe the degree of genetic differences between species, to identify hybrids and to determine if hybrids survive to breed.

Although we have information on hybridization in British Columbia, very little is known in Colorado about dominance relations between species, frequency of hybridization or the degree to which habitat disturbance causes hybridization. Preliminary work by Grabenstein and Taylor has shown that BCCH predominate in Boulder, but one has been seen at our Mountain Research Station, at 9,500 feet elevation. MOCH range from above 11,000 feet on Niwot Ridge throughout stands of spruce and fir, lodgepole and ponderosa pine, but they have also been spotted in Boulder.

Banding and genotyping will reveal the frequency of hybrids in Colorado and whether the hybrids are most frequent suburbia Boulder, less frequent in Sugarloaf with widely space mountain homes, and lowest of all at CU’s Mountain Research Station, which is maintained as wild as is practically possible. Early results will also test whether hybrids are produced by extra-pair copulations but raised by two mountain chickadees.

Ultimately, the description of the hybridization will collect diverse types of data to determine if hybridization changes over time with increasing disturbance or with climate change.  The chickadees that live among us are precious neighbors, for they have much information to share in exchange for a spiffy nest box. 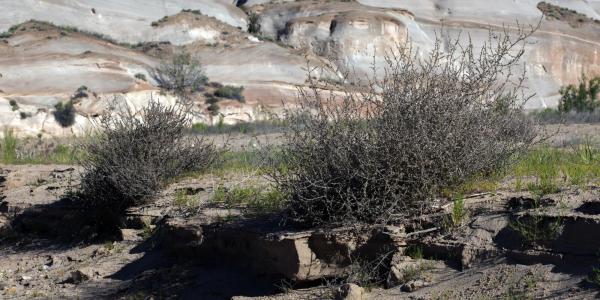 Although tumbleweeds were familiar icons of the West, they were not native to the West, nor were they growing around the early western towns when they were established. END_OF_DOCUMENT_TOKEN_TO_BE_REPLACED

An amplectic pair of treehoppers, Telamona monticola, was on a CU sidewalk beneath a swamp oak tree, Quercus bicolor. I surmised that they tumbled from the tree while delicately adjusting their positions. I collected the treehoppers to photograph them and 7 hours later they were still amplectic. END_OF_DOCUMENT_TOKEN_TO_BE_REPLACED 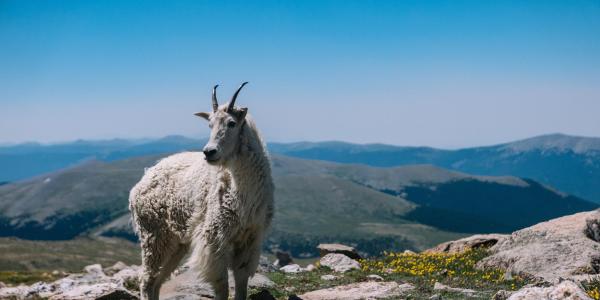 Is that good or bad? Depends on your perspective, but there is a cost to native plant and animal communities. END_OF_DOCUMENT_TOKEN_TO_BE_REPLACED
Categories:
Tags:
Return to the top of the page