As I walked past a small, damaged cottonwood tree, I noticed an iridescent  movement. It was a black beetle with numerous glimmering dots, even on its large eyes. It had an oval body, a blunt head and short antennae. This was a metallic wood boring beetle.

Colorado is home to 92 species of metallic wood boring beetles that share the wood boring habit and glittering iridescence, with adults ranging in length from 0.3 to 2.5 inches. Many look similar, so a naturalist needs professional help identifying species. Drs. Boris Kondratief and Don Bright at Colorado State University identified this one as Poecilonota cyanipes—the specific name, cyanipes, means blue-footed (see the photo). 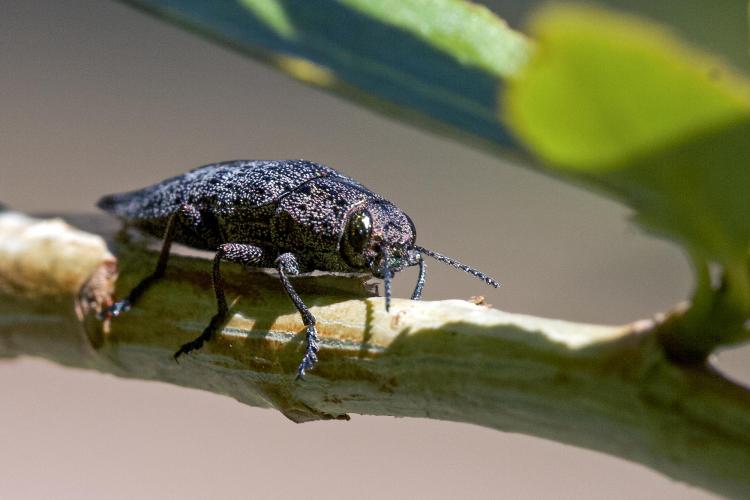 A wood boring beetle walks along a cottonwood twig, perhaps looking for a site to lay its eggs. Click on photo to see larger image. Photo by Jeff Mitton.

The blue-footed borer is a native to North America and is able to use willows, cottonwoods, aspens and locusts. A number of wood-boring beetle species make pests of themselves by moving into orchards to utilize apple and other fruit trees or invading cities and towns to utilize maples planted for shade.

The blue-footed borer that caught my attention in early July was probably looking for a place to deposit eggs. After emerging through the bark in May and June, adults mate and females lay eggs in crevices or cracks in the bark of their host trees. Eggs hatch in two weeks and young larvae chew into the bark to feed on the phloem layer at the interface of bark and sapwood. Phloem is the soft conducting tissue that transports sugars from leaves to roots, so it is easy to chew and highly nutritional. When larvae grow to later stages, they burrow deeper into the wood to excavate pupal chambers, where they spend the winter. Most species complete their life cycles in one year, but species living in colder environments may require two or even three years.

The larvae of some species are quite large, over an inch long and both wide and deep. I remember having lunch in my back yard and suddenly becoming aware of a rhythmic sound emanating from my woodpile, 30 feet away. Robust flathead wood boring larvae were chomping their way through the wood. They can do considerable damage to a living tree, not only by tunneling through it, but also by providing entrances for bacteria, fungi, and other insects. But because our native wood boring beetles usually attack damaged, sick, senescing, or recently trimmed trees, their damage to healthy forests is typically small.

Wood boring beetles in the genus Melanophilaare noteworthy because they must lay their eggs in freshly-burned trees, and for this reason they are called fire-chaser beetles.  Species in this genus are known to fly as far as 60 to 100 kilometers to reach a fire, but they do not detect fires by their smoky plumes. Below and between their middle legs is a pair of tiny pits, each containing 70 dome-shaped sensors filled with a liquid that absorbs infrared radiation emanating from fires. The liquid swells as it absorbs infrared radiation, alerting beetles to a fire. Beetles may arrive while the fire is still burning and fire fighters have reported being bitten by metallic boring beetles mistaking them for trees. A beetle that bores through wood can deliver a substantial bite.

Presently, the metallic wood boring beetle uppermost in people’s minds is not any of our native species, but the emerald ash borer, which was accidentally introduced from Asia and eastern Russia via wooden shipping crates sent from Europe to Michigan in 2002. Ash borers have swept across the country, reaching Boulder in 2013. It is estimated that 98,000 ash trees have been planted in Boulder as ornamentals, but none of the ornamental, planted species of ash are native to Colorado. So we have the disconcerting situation of an invading species of wood boring beetles devastating several species of introduced ornamentals.

An amplectic pair of treehoppers, Telamona monticola, was on a CU sidewalk beneath a swamp oak tree, Quercus bicolor. I surmised that they tumbled from the tree while delicately adjusting their positions. I collected the treehoppers to photograph them and 7 hours later they were still amplectic. END_OF_DOCUMENT_TOKEN_TO_BE_REPLACED

With pendant urns, this perennial lofts its seeds with feathery plumes. END_OF_DOCUMENT_TOKEN_TO_BE_REPLACED

The Boulder Chickadee Study is a collaborative, long term effort between Kathryn Grabenstein, a PhD candidate in ecology and evolutionary biology at the University of Colorado Boulder, and her thesis advisor, Scott Taylor, to examine hybridization. END_OF_DOCUMENT_TOKEN_TO_BE_REPLACED
Categories:
Tags:
Return to the top of the page