We nearly ate turkeys to extinction a second time

We nearly ate turkeys to extinction a second time

The robust bones of turkeys fossilize well, allowing us to gain insight into their species diversity far back in history. Multiple species of turkeys have been in America for millions of years and it is apparent that, when humans and turkeys met, we have had substantial impacts on their population sizes.

The California turkey, Meleagris californica, arose approximately 11 million years ago in North America, and turkey bones in the La Brea tar pits in California indicate that California turkeys were abundant. They were here, in great numbers, to watch the first Native Americans arrive from the north 15,000 to 13,000 years ago. They went extinct 12,000 to 10,000 years ago, in the Megafaunal Extinction that took a large proportion of mammals and birds. 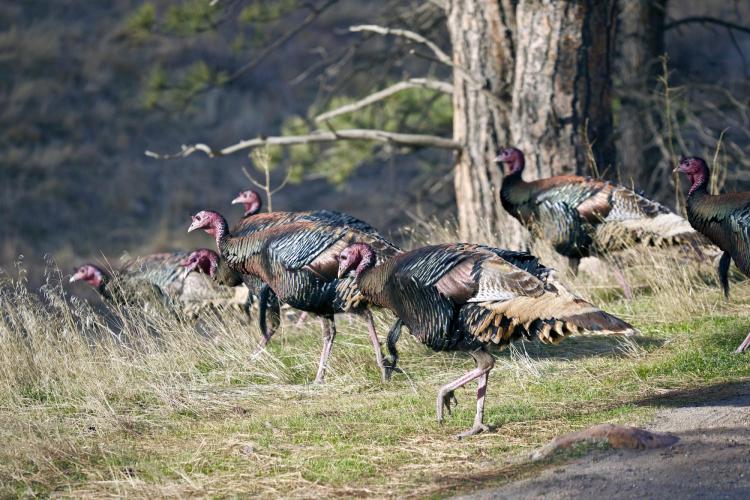 The extinction event was attributed to either climate change as the glaciers shrank, or overhunting by Native Americans, or both. Hunting pressure certainly pushed the California turkey toward extinction, for turkey bones were found in multiple cooking sites. Anthropologists have found several mammoth kill sites and evidence of butchering of mammoths, suggesting that Ancestral Americans ate several species to extinction, including the California turkey.

The wild turkey, Meleagris gallopavo, evolved about 5 million years ago, and today it is established in all 48 contiguous states and small portions of Mexico and Canada. Five subspecies are recognized for differences in historic range, feather markings and size.

The southern Mexico subspecies, Meleagris gallopavo gallopavo, is of special interest because it is the ancestral lineage of our domesticate turkey, Meleagris gallopavo domesticus. Mayans domesticated it more than 2,000 years ago, and Spanish explorers introduced to Europe. They were shipped to the Jamestown settlement in 1608 and the Pilgrims brought them to New England in 1620. Today, natural populations of the southern Mexico subspecies are critically endangered, receiving pressure from both hunting and disappearing native habitat.

As the population of early European settlers increased, they impacted wild turkey populations in two ways. They cleared forests to create farmland and harvest lumber and they hunted wild turkeys. Initially, turkeys were so abundant that settlers believed their populations could sustain any level of harvesting. But hunting was relentless, with no seasonal restrictions and no bag limits — everyone could take as many as they could shoot.

With less land for nesting and foraging and unprecedented hunting pressures, populations of turkeys dwindled and then disappeared. Turkeys had been eradicated from Connecticut by 1813, and from Vermont in 1842. By the early 1930s they had been eradicated from 18 states and were found only in areas that were essentially inaccessible to hunters. Their population size had been reduced to only 2 percent of their original population size — from 10 million to 200,000. Wild turkeys were on the brink of extinction.

America's attention and resources were consumed first by the Depression in the 1930s and then by World War II in the 1940s, but as prosperity gained a foothold managers turned their attention to restoration and management of wild turkeys. The majority of effort was initially put into raising wild turkeys in captivity and then releasing birds into sites that they occupied previously or that seemed just right for them. After about two decades, this strategy was abandoned, for birds raised in captivity knew nothing about searching for food, avoiding predators, and the social and mating system that had sustained them for millions of years.

Managers released 330,000 birds into 800 sites, but only 40 of them succeeded, for the dismal success rate of 5 percent.

A more laborious strategy had far greater success. Wild birds trapped from one of the remaining sites could be introduced to an area from which they had been extirpated by hunting. 30,000 wild birds were released into 968 sites, and 808 populations thrived, for a success rate of 83 percent. In addition, hunting seasons and bag limits were established to reduce hunting pressure so that populations could be self-sustaining. Today, wild turkeys are in all 48 of our contiguous states and each state manages a hunting season.

Thousands of years ago, the First Americans found a land of plenty, and among their quarry was the California turkey. After the arrival of European settlers, hunters collected wild turkeys year round, eradicating them from essentially all areas that hunters could access. So we almost ate a second turkey species to extinction. The recovery of wild turkeys from 200,000 in the 1930s to over 6,500,000 is one of wildlife managers most successful programs.

An amplectic pair of treehoppers, Telamona monticola, was on a CU sidewalk beneath a swamp oak tree, Quercus bicolor. I surmised that they tumbled from the tree while delicately adjusting their positions. I collected the treehoppers to photograph them and 7 hours later they were still amplectic. END_OF_DOCUMENT_TOKEN_TO_BE_REPLACED

With pendant urns, this perennial lofts its seeds with feathery plumes. END_OF_DOCUMENT_TOKEN_TO_BE_REPLACED

The Boulder Chickadee Study is a collaborative, long term effort between Kathryn Grabenstein, a PhD candidate in ecology and evolutionary biology at the University of Colorado Boulder, and her thesis advisor, Scott Taylor, to examine hybridization. END_OF_DOCUMENT_TOKEN_TO_BE_REPLACED
Categories:
Tags:
Return to the top of the page