Snowpack is boon for subalpine larkspurs

Snowpack is boon for subalpine larkspurs

Depth of spring snowpack is early indicator of abundance of blooms

Subalpine larkspur forms large and dense populations in the West Elk and San Juan mountains in July and August. These are large plants with towers, or racemes, of deep blue to purple flowers that reach heights of 3 to 6 feet. In my opinion, they are most spectacular when they grow intermixed with the large, white, lacy umbels of cow parsnip and loveroot, which hold their flowers at similar heights. All three species are most robust and tall beside streams or in moist meadows.

Subalpine larkspur, Delphinium barbeyi, has a descriptive name. Delphinium refers to the flower buds, which resemble jumping dolphins. The name "larkspur" describes the flower's long projection from the top sepal — reminiscent of the spur on the legs of some birds. An individual flower is composed of five sepals, all blue to purple, with the sepal at the top of the flower having a spur that projects far behind. Within the circle of sepals are four petals, two blue and hairy petals at the bottom, two smooth white petals at the top. 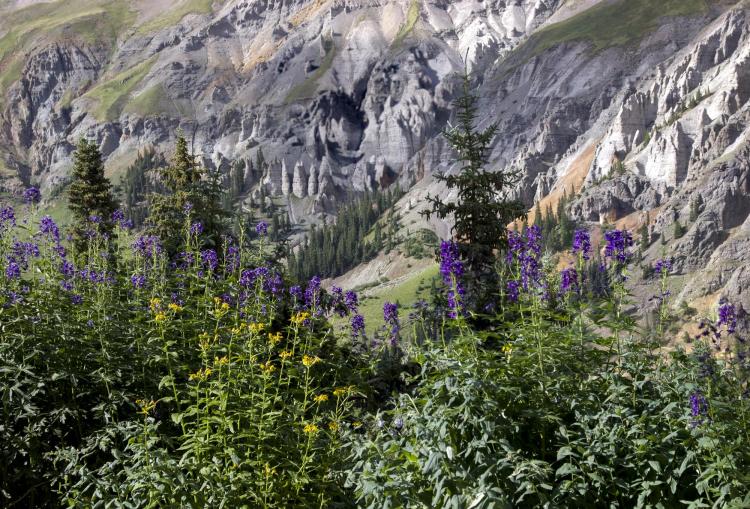 Subalpine larkspur high above Yankee Boy Basin in the San Juan Mountains of Colorado. Click on image or on this link to see larger image. Photo by Jeff Mitton.

The nectar-producing spurs of the two top petals are tucked inside the large spur. The butterflies and bumblebees that pollinate larkspurs must probe the spur to get the sweet reward that fuels their flight.

Delphinium is a large genus, containing approximately 250 species in North America, Europe and Asia, and all of them have similar flowers, but they have other traits in common as well. For the many species of larkspurs in western North America, all of them are protected by a variety of alkaloids that are poisonous to many herbivores.

Cows and horses are particularly susceptible to the alkaloids, and many cows have died after browsing moderate amounts of larkspur foliage. It is a curious but well-known fact that sheep consume larkspurs without any ill effects, and this forms the basis for a strategy practiced by some ranchers. If a meadow has larkspurs, they can be removed by releasing sheep first. After sheep consume the larkspurs, ranchers can bring in cows and horses.

Subalpine larkspurs populations are tenacious, for the plants are long-lived, but the number of plants producing flowers and the number of flowers per plant vary considerably from year to year. Long-term studies of plant populations have revealed that the depth of snowpack in the West Elk Mountains impacts both the time of flowering and the abundance of flowering.

David Inouye, at the Rocky Mountain Biological Laboratory in Gothic, has worked with colleagues since 1977 to monitor plant abundance and flowering success in common plant species found in a large number of experimental study plots. Acutely aware that climate change has pervasive impacts in natural populations, Inouye and his colleagues recorded snow depth and time of snow melt to measure their impacts on plant growth and reproduction.

Snowpack depth measured on May 15 was an excellent predictor of both the date of first flowering and the abundance of flowers in the experimental plots. The deeper the snow, the longer the time until snowmelt was complete and the later the date of first flowering. In addition, the deeper the snow, the greater the number of flowers.

Why does deeper snowpack lead to more flowers?While delayed flowering might sound like a disadvantage, it allows the plants to escape damage to leaves and flower buds by late spring frosts. When plants avoid frost damage they grow larger, more plants grow sufficiently large to produce racemes and racemes are larger. This study showed that the impacts of snowpack are profound; the day of first flowering varied by 24 days among years and the number of flowers per plot varied from 25 to 175 among years. Deep snow greatly enhances the floral display.

A similar study of early larkspur, Delphinium nuttalianum, revealed the same response to snowpack for flowering time and abundance of flowers, suggesting the results are general.

Will climate change alter snowpack in Colorado? Although predictions vary somewhat, they suggest a mild increase in snowpack and empirical data from the study plots seem to show an increase over the 22 years of this study. So wildflower enthusiasts have a reasonable probability of seeing greater floral displays in the future.

An amplectic pair of treehoppers, Telamona monticola, was on a CU sidewalk beneath a swamp oak tree, Quercus bicolor. I surmised that they tumbled from the tree while delicately adjusting their positions. I collected the treehoppers to photograph them and 7 hours later they were still amplectic. END_OF_DOCUMENT_TOKEN_TO_BE_REPLACED

I looked around to see what was in bloom and found a native wildflower with the strange name of ballhead waterleaf, Hydrophyllum capitatum. END_OF_DOCUMENT_TOKEN_TO_BE_REPLACED
Categories:
Tags:
Return to the top of the page