Ornate checkered beetles, Trichoda ornatus, are bright, conspicuous and tolerant of humans, so they are easily found and fun to watch. They are indeed ornate, with metallic blue-black backgrounds, spots and lines of bright yellow, and dense, whitish or yellow hairs

The life cycle takes one year in which beetles start out as parasites and metamorphose to herbivores that become predators when the opportunity presents itself. A female lays a single egg in a flower, near the center. 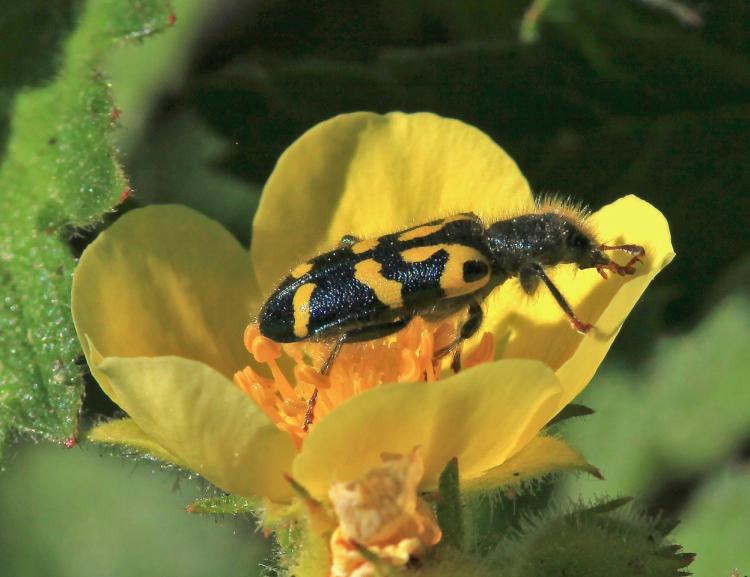 As adults, ornate checkered beetles usually eat pollen, but will consume leafcutter, mason and resin bees that it encounters in flowers. Click on the photo to see a larger version of the image. Photo by Jeff Mitton.

The flowers most commonly chosen for oviposition are common yarrow (Achillea millefolium), several species of buckwheat (Eriogonum), or one of the lilacs or soap bushes (Ceanothus), all pollinated by solitary bees. The egg hatches, and the larva attaches to the leg of a pollinating solitary bee (not a honey bee) to hitch a ride back to the nest.

Once in the nest, it finds its way to a cell that it being provisioned with food and prepared for an egg. After the egg is in the cell and the cell is closed, the beetle first eats the food intended for the bee. When that is gone, the beetle larva turns on the larval bee, consuming it.

Usually, one larval bee is not sufficient to fuel all of development, so the beetle larva digs through the wall of its cell to enter an adjacent cell. A larva will consume between one and eight larval bees, depending on their size—solitary bee species vary dramatically in size. When the beetle larva reaches the fourth instar, it stops feeding and then enters the pupal stage. The adult emerges in spring and adults are seen flying a few days later.

Adults feed, court, mate and oviposit on flowers. They are often seen dusted with pollen, for adults eat primarily pollen. However, they prey on solitary bees foolish enough to attempt to pollinate a flower occupied by a beetle. They have been documented to prey on bees in the genus Ashmeadiella, which contains about 50 species in three groups are commonly referred to as leafcutter, mason and resin bees.

I have found ornate checkered beetles on roses in my yard, on cinquefoils in the mountains near the town of Ward and on prickly pear flowers near the La Sal Mountains in Utah. Every one was on a yellow flower, but I have not found a great number, so I don’t know whether that is coincidence or whether yellow beetles prefer yellow substrates.

Substantial variation in size, color, color pattern and habitat inspired biologists to describe five subspecies of ornate checkered beetles across their wide range, which extends from the eastern edge of the Rocky Mountains to the Pacific Ocean and from northern Mexico to Alaska. T. ornatus ornatusis the only subspecies in Colorado and New Mexico and it is also in northeastern Arizona.

Two subspecies are found in the Great Basin, and they are polymorphic for color. One color morph closely resembles T. ornatus ornatus, while the other has red bands and spots instead of yellow.

The red beetles are found only in the Great Basin, and percentages of yellow and red forms differ between populations. A casual inspection of the data reveals a robust pattern—red beetles become common in the driest and hottest sites, whereas yellow beetles are most common in relatively moist and cool sites. This pattern suggests that natural selection influences the relative abundance of the forms, producing a general pattern in a heterogeneous mosaic.

Research in natural populations usually tests hypotheses, produces new insights and invariably generates more refined questions. Is color variation from place to place driven by differences in predation, or mortality, or growth rate, or fecundity? If yellow checkered beetles prefer to attend yellow flowers, do red beetles prefer red flowers? Do color morphs influence patterns of mating, as they do in some birds and lizards?

Perhaps some students will conduct studies to help us better understand why the color morphs of ornate checkered beetles vary between hot and dry versus cool and wet environments.

An amplectic pair of treehoppers, Telamona monticola, was on a CU sidewalk beneath a swamp oak tree, Quercus bicolor. I surmised that they tumbled from the tree while delicately adjusting their positions. I collected the treehoppers to photograph them and 7 hours later they were still amplectic. END_OF_DOCUMENT_TOKEN_TO_BE_REPLACED

With pendant urns, this perennial lofts its seeds with feathery plumes. END_OF_DOCUMENT_TOKEN_TO_BE_REPLACED

The Boulder Chickadee Study is a collaborative, long term effort between Kathryn Grabenstein, a PhD candidate in ecology and evolutionary biology at the University of Colorado Boulder, and her thesis advisor, Scott Taylor, to examine hybridization. END_OF_DOCUMENT_TOKEN_TO_BE_REPLACED
Categories:
Tags:
Return to the top of the page