The paradox of toxic nectar and pollen in death camas

The paradox of toxic nectar and pollen in death camas

Plants are chemical factories. They capture light energy and pull carbon dioxide from the air to synthesize sugars, amino acids and proteins. In addition, they produce an incredible diversity of chemical deterrents and poisons to defend themselves from insect, mollusk and mammalian herbivores. 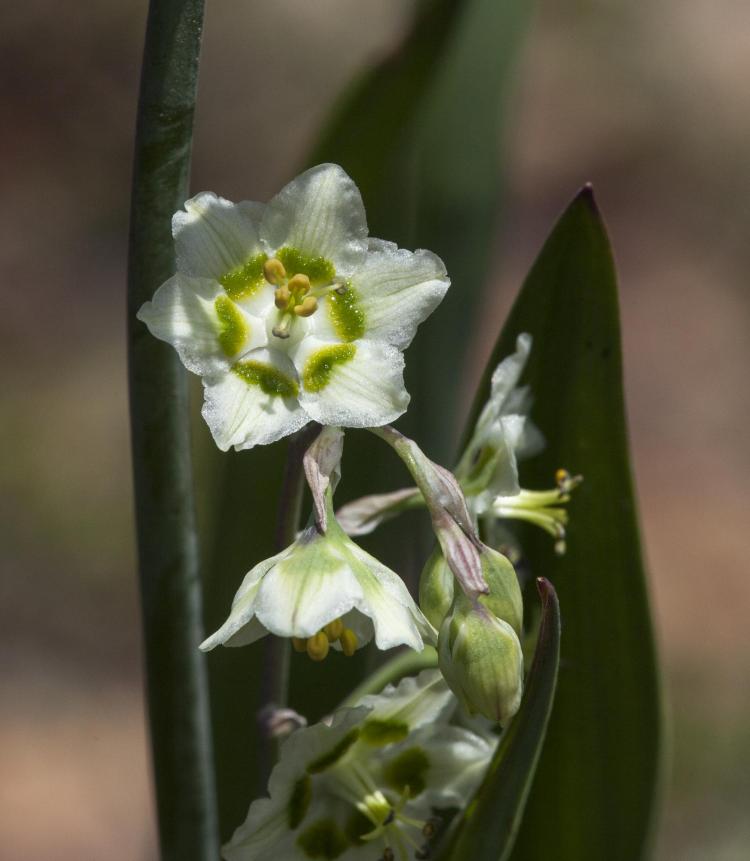 Nectar and pollen of death camas are toxic for many pollinators. Click here for larger image. Photo by Jeff Mitton.

Lewis and Clark discovered death camas on July 7, 1806, on Lewis and Clark Pass, on the Continental Divide in Montana. Its common name comes from its frequently lethal consequences and the fact that, before it flowers the plant resembles common camas, Camassia quamash, whose bulbs were a staple in the diet of Native Americans in the northwest.

Early western settlers would occasionally collect death camas when they were searching for either common camas or for wild onions (genus Allium) — the three groups are unrelated, but they have similar bulbs and leaves and stems look similar before their flowers develop. But common camas and onions are edible, while consumption of a single bulb of death camas, Zygadenus elegans (or Anticlea elegans), can be lethal for humans. It is also lethal for cows and sheep that browse on its leaves in early spring.

The flowers of death camas have six papery white petals bearing heart-shaped glands near their bases that form a green circle with an inner yellow fringe. Six arching stamens — can be orange or green — surround a central conical pistil that splits into three arching stigmas.

The flower is half an inch in diameter and flowers can be arranged on a single stalk but are more frequently seen on a branched panicle with up to 50 flowers. In contrast, common or blue camas has long blue petals on flowers 2 inches in diameter, while wild onion flowers come in many colors, but its flowers are arranged in a 1-inch-round cluster at the tip of the stem.

Death camas flowers are certainly attractive, and they are open with conspicuous anthers and stigmas, so they would attract many pollinators. But many reports and some experiments tell us that the pollen and nectar are laced with zygadenine, the steroidal alkaloid that makes the leaves, stems and bulbs deadly poisonous.

Consequently, generalist pollinators become incapacitated and die after harvesting pollen and/or nectar. This is counterintuitive, for flowers provide nectar and pollen to reward insects for visiting and to encourage them to visit another flower of the same species to exchange pollen among individuals in the population.

This is where the story gets complicated. It is not in the best interests of a plant to be visited by every pollinator flying because generalist pollinators can be detrimental. If a pollinator takes pollen from species A to species B, C and D, species A loses pollen and nectar and gains no benefit. Flowers are best served by faithful, specialist pollinators that transport and deposit their pollen to another plant of the same species, again and again.

Furthermore, pollen and nectar are wasted when nectar or pollen thieves steal nutritious calories without transferring pollen — ants are frequently nectar thieves. So flowers are best served not by offering free food for all, but by repulsing pollen and nectar thieves while rewarding efficient pollinators with high fidelity. One way to repulse the freeloaders is produce toxic nectar and pollen that excludes generalists, leaving more for the faithful specialists.

For death camas, only one specialist is known. The death camas bee, Andrena astragali, is a solitary, ground-nesting species, one of the many related species referred to as mining bees. Death camas bees collect pollen from death camas, but do not eat the pollen and probably eschew its nectar as well.

After collecting pollen from several plants and inadvertently pollinating them, they roll the pollen into a ball and place it in a subterranean nest dug into sandy soil. They then deposit one egg on top of the pollen and seal the nest. When the egg hatches, the larva eats the pollen, so either the larvae are tolerant of the poison, or can sequester or detoxify the poison, or the pollen loses its toxicity before the egg hatches. The adult bee goes to other species when it needs to eat pollen or sip nectar.

Pollination biologists with a flair for chemistry have found toxic nectar or pollen in 21 different plant groups, so this strategy to deter generalist pollinators and nectar thieves may be somewhat rare but is widespread.

An amplectic pair of treehoppers, Telamona monticola, was on a CU sidewalk beneath a swamp oak tree, Quercus bicolor. I surmised that they tumbled from the tree while delicately adjusting their positions. I collected the treehoppers to photograph them and 7 hours later they were still amplectic. END_OF_DOCUMENT_TOKEN_TO_BE_REPLACED

With pendant urns, this perennial lofts its seeds with feathery plumes. END_OF_DOCUMENT_TOKEN_TO_BE_REPLACED

The Boulder Chickadee Study is a collaborative, long term effort between Kathryn Grabenstein, a PhD candidate in ecology and evolutionary biology at the University of Colorado Boulder, and her thesis advisor, Scott Taylor, to examine hybridization. END_OF_DOCUMENT_TOKEN_TO_BE_REPLACED
Categories:
Tags:
Return to the top of the page