I was leaving Heil Ranch when I spotted a flock of 30 to 40 wild turkeys foraging above the creek. I pulled over to watch, and as I stood beside the road, they obligingly worked their way down the hill, across the creek and the road, leisurely passing within 20 feet of me.

The close encounter allowed me to look at them carefully. 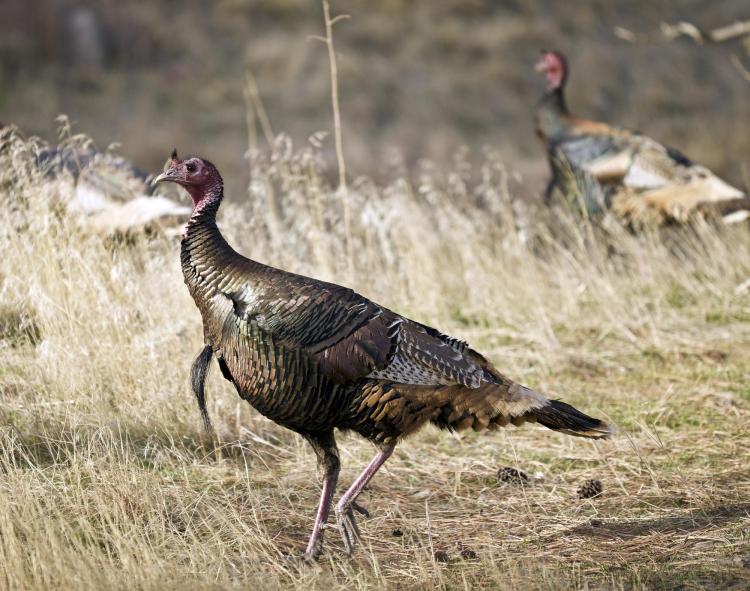 This herd seemed to be predominantly and perhaps exclusively young males, which have strikingly beautiful iridescent plumage with areas of green, red, purple, copper, bronze and gold. But a male's neck and head are mostly naked with fleshy protuberances called caruncles, which form corrugations on the sides of the neck, while those on the front of the neck become fleshy, flapping wattles.

From the top of the beak a structure that looked like a miniature rhino horn will grow into a fleshy protuberance called a snood that can expand to nearly occlude the eyes and dangle several inches below the beak. Males also have modified feathers on their heads that form a sparse stubble of short, stiff hairs and a second clump of modified feathers on their chests that form a tassel called, quite inexplicably, a beard.

The male form, which I consider a mixture of elaborately beautiful and repulsive, has been assemble by sexual selection, for both the plumage and the structures on the neck and head signal health, disease resistance and position in the social hierarchy.

For example, the brilliance of the feathers is noticeably reduced if the birds become infected with coccidians, a group of intracellular parasites. Males fight to gain access to hens, and a long, thick snood signals both dominance and outstanding physical condition. Rage and fear are signaled by changes in color of the wattles, snood and caruncles, which can quickly turn from garish red to pale blue. A sickly male has a pale, deflated snood.

Once males have worked out a dominance hierarchy by battling, they dance and strut to seduce the hens. Experimental studies have shown that females prefer large, brilliant toms with enormous snoods and wattles. They are effectively choosing to mate with strong, dominant, parasite-resistant males. A male's appearance advertises important information for both other males and females.

Wild turkeys, or Meleagris gallopavo, are native to the forests of North America, from New England to Florida, and west to the upper Midwest, the Southwest and to Central Mexico. Many groups of Native Americans hunted turkeys for their meat and their feathers and they also domesticated turkeys — twice.

The first evidence of domesticated turkeys was found at an archeological site named El Mirador in Peten, Guatemala. This was a Mayan site, but the turkeys managed there were outside the range of the wild turkey, which did not extend further south than Central Mexico. The ocellated turkey, or Meleagris ocellata, is native to Guatemala, but archeological and DNA evidence indicates that the domesticated turkeys kept by the Mayans were derived from wild turkeys from Central Mexico.

The domestication apparently occurred in Central Mexico, and then domesticated turkeys were brought to Guatemala 2,000 years ago in trade for other goods.

The turkeys domesticated in the Southwest came from many hundreds of miles to the east, but we have no idea how those birds were obtained. Archeologists, anthropologists and geneticists have more work to do before we know the full extent of turkey trading more than 2,000 years ago.

An amplectic pair of treehoppers, Telamona monticola, was on a CU sidewalk beneath a swamp oak tree, Quercus bicolor. I surmised that they tumbled from the tree while delicately adjusting their positions. I collected the treehoppers to photograph them and 7 hours later they were still amplectic. END_OF_DOCUMENT_TOKEN_TO_BE_REPLACED

With pendant urns, this perennial lofts its seeds with feathery plumes. END_OF_DOCUMENT_TOKEN_TO_BE_REPLACED

The Boulder Chickadee Study is a collaborative, long term effort between Kathryn Grabenstein, a PhD candidate in ecology and evolutionary biology at the University of Colorado Boulder, and her thesis advisor, Scott Taylor, to examine hybridization. END_OF_DOCUMENT_TOKEN_TO_BE_REPLACED
Categories:
Tags:
Return to the top of the page