Last May, I went to the Maze District in Canyonlands National Park to enjoy its unique scenery unusual natural history. I was in the company of three colleagues from CU — Scott Ferrenberg, Jen Bowman and Bill Bowman — each a different mix of biologist, natural historian and photographer. On two epic hikes, we encountered a somewhat rare species of milkweed that has turned out to be unusual.

Scott found and identified an antelope horns milkweed, Asclepias asperula, growing in the deep sand of a dry streambed. Within a hundred yards, we found two more, and the next day, Jen found three — all growing in the sand of dry streams. We did not find any growing outside the streambeds. 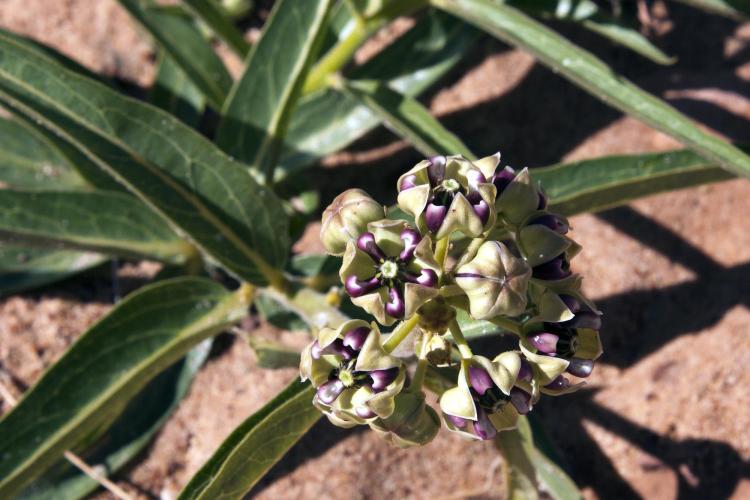 Each milkweed was between 1 and 2 feet tall, with long, narrow, deep green leaves, and most had one or more umbels or clusters of flowers. It struck me that dry streambeds were a precarious habitat for a plant, for when thunderstorms soak the desert, streamflows can be high, fast and powerful — after all, those streams cut deep canyons through solid rock.

Antelope horns milkweeds are native to the southwest and northern Mexico, and like the familiar showy milkweeds that are common in our greenbelt, they are hosts to monarch butterflies and the closely related queen butterflies. Milkweeds produce a variety of cardiac glycosides that interfere with the beating of the heart, deterring most herbivores, but antelope horns synthesize a unique glycoside in addition to the common ones.

A variety of milkweed preparations have been used as natural remedies and some uses continue today. Faculty in the CU School of Pharmacy have conducted interviews of Hispanic families in the San Luis Valley, and they report that a tea made from A. asperula is used to treat a "sluggish heart" in elderly patients. In the San Luis Valley, pronghorns milkweed has the common name "inmortal," which is Spanish for "immortal." I presumed that this common name came from an overly optimistic expectation for people consuming milkweed tea, but I was wrong.

The inspiration for the name "inmortal" and the explanation for the allegedly precarious occupation of dry streambeds both come from the roots. Inmortal gained its name not because sipping milkweed tea grants immortality, but because if the plant is harvested leaving only the long, tapering taproot, or even part of it, the plant will pop up the following spring.

The plant is allegedly immortal, not the patient. The thick taproot grows more than an inch in diameter and more than a foot deep, stabilizing the soil and anchoring the plant. In the desert, when raging floodwaters rip off stems, leaves and flowers, new growth pops up from the taproot.

Milkweed flowers are unusual, distinct and complex, with many flowers presented in a cluster called an umbel. Petals are reflexed or bent back, and with sepals, they form a corolla lobe rather than a tube. Most importantly, flowers have structures such as horns and hoods that most flowers lack.

Part of the explanation for the odd structure is that milkweeds do not release individual pollen grains to be dispersed by wind or insect. Instead, pollen are presented in a waxy, crumpled sheet called a pollinium (plural pollinia) that must be carried to another plant by a pollinator. Each pollinated flower swells into a 4- to 8-inch-long seedpod. These are most conspicuous when the seeds are mature and the papery seedpod splits open to release the small seeds with their long, silken plumes that catch the wind and disperse the seeds.

An amplectic pair of treehoppers, Telamona monticola, was on a CU sidewalk beneath a swamp oak tree, Quercus bicolor. I surmised that they tumbled from the tree while delicately adjusting their positions. I collected the treehoppers to photograph them and 7 hours later they were still amplectic. END_OF_DOCUMENT_TOKEN_TO_BE_REPLACED

With pendant urns, this perennial lofts its seeds with feathery plumes. END_OF_DOCUMENT_TOKEN_TO_BE_REPLACED

The Boulder Chickadee Study is a collaborative, long term effort between Kathryn Grabenstein, a PhD candidate in ecology and evolutionary biology at the University of Colorado Boulder, and her thesis advisor, Scott Taylor, to examine hybridization. END_OF_DOCUMENT_TOKEN_TO_BE_REPLACED
Categories:
Tags:
Return to the top of the page