Biocontrol weevil appears out of control

Biocontrol weevil appears out of control

In mid September I was walking on the CU campus when I noticed a teeming population of weevils on a small cluster of Canada thistles. Almost half of them were amplectic. Several hours later, when I checked them again, they were still on the thistles, still amplectic.

The weevils stayed on the thistles for at least another week. 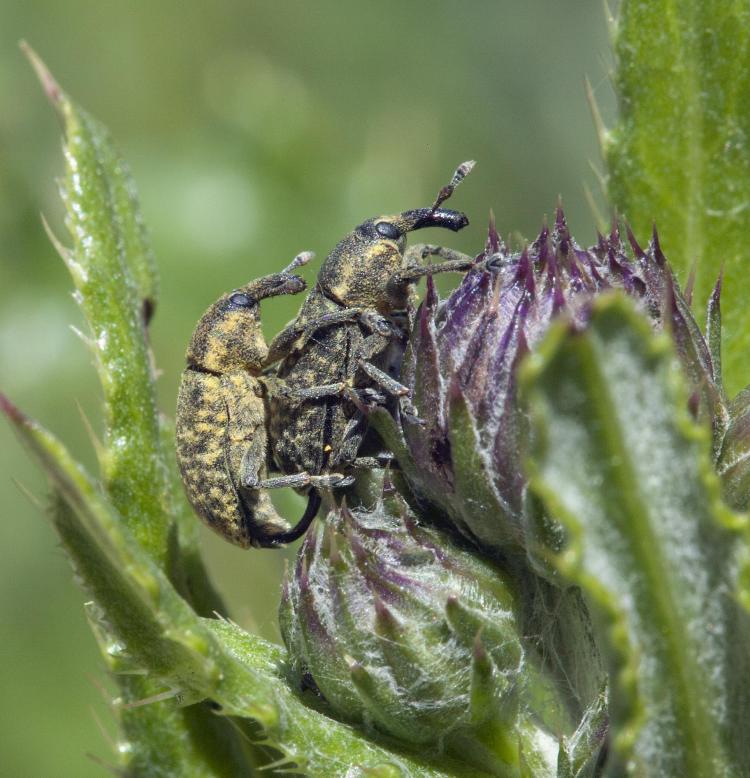 Canada thistle, Cirsium arvense, is native to Europe but was introduced accidentally to North America in the 1600s. Since that time, it has become a serious agricultural pest, occupying space in virtually all types of crop fields and invading pastures.

The "biocontrol" weevil, also called the black and gold weevil and the Canada thistle bud weevil, is formally Larinus planus. It is a native in Europe, and little is known about its introduction other than it was not planned. It was first noticed in 1968 in the northeastern U.S., and shortly thereafter they were established and spreading in Pennsylvania, Maryland, Ohio and New York.

Canada thistle bud weevils earned this particular common name for their preference for the buds of Canada thistle. They mate on the buds, and the female bores one hole into a bud with its snout, oviposits one egg inside, then seals the hole by packing it with feces. When the larva hatches, it proceeds to eat virtually everything inside the bud, including the seeds. It pupates in a bed of chewed plant material and adults emerge from the top of the bud. Adults will be mating within seven to 10 days and are fully capable of flight.

In the 1990s, managers with the best of intentions introduced weevils in 24 localities in Colorado.

In 1999, biologists at the Rocky Mountain Biological Laboratory in Gothic found weevils near a site where they had been released in 1992. The problem was that they were not on Canada thistle, but on an uncommon native, Tracy's thistle, Cirsium undulatum. Subsequent studies of infestation showed that the weevils were reducing the seed output of Tracy's thistle by half but were not inflicting damage on Canada thistles.

In 2010, while collecting seed from Pitcher's thistle, Cirsium pitcher, conservation managers discovered infestations of Canada thistle bud weevils. This thistle is found only on sand dunes on the shores of Lake Superior, Lake Michigan and Lake Huron and is formally listed as endangered. By reducing seed output, the weevils reduce thistle population growth rates by 10 percent to 12 percent. Models of population growth suggest that the weevils will cause the extinction of some populations in five to 13 years.

Biological control of pest species evokes both high hopes and deep fears. On the one hand, one might achieve a simple, efficient and economic solution to a problem. On the other hand, the control agent may switch from its intended host to one or several unintended native species. Experiments can be devised to determine how efficient the control species can be on the target species, and to indicate whether it is likely to switch to other hosts. But the problem with biological control is that is not possible to know if the control species will evolve, and if it does, whether it will acquire the capacity to damage native species.

An amplectic pair of treehoppers, Telamona monticola, was on a CU sidewalk beneath a swamp oak tree, Quercus bicolor. I surmised that they tumbled from the tree while delicately adjusting their positions. I collected the treehoppers to photograph them and 7 hours later they were still amplectic. END_OF_DOCUMENT_TOKEN_TO_BE_REPLACED

With pendant urns, this perennial lofts its seeds with feathery plumes. END_OF_DOCUMENT_TOKEN_TO_BE_REPLACED

The Boulder Chickadee Study is a collaborative, long term effort between Kathryn Grabenstein, a PhD candidate in ecology and evolutionary biology at the University of Colorado Boulder, and her thesis advisor, Scott Taylor, to examine hybridization. END_OF_DOCUMENT_TOKEN_TO_BE_REPLACED
Categories:
Tags:
Return to the top of the page