A prolonged migration of painted ladies

A prolonged migration of painted ladies

You must have seen them — orange, black and white butterflies, flitting through yards, across fields and through forests.

We have been immersed in a large and prolonged migration of painted lady butterflies. On a small scale, it does not appear to be a migration, for the flight of individual butterflies appears undisciplined and erratic, unlikely to be a purposeful movement to a common destination.

Painted ladies, Vanessa cardui, are known for their migrations, which vary in magnitude among years. Some years the butterflies are rare, but in other years biologists estimated that billions of painted ladies started the migration from overwintering sites in Northern Mexico and southern Arizona. They spread out as they work their way north, some spreading into California and continuing on to British Columbia and Alaska, while others move through the Great Plains to the prairie provinces of Canada. 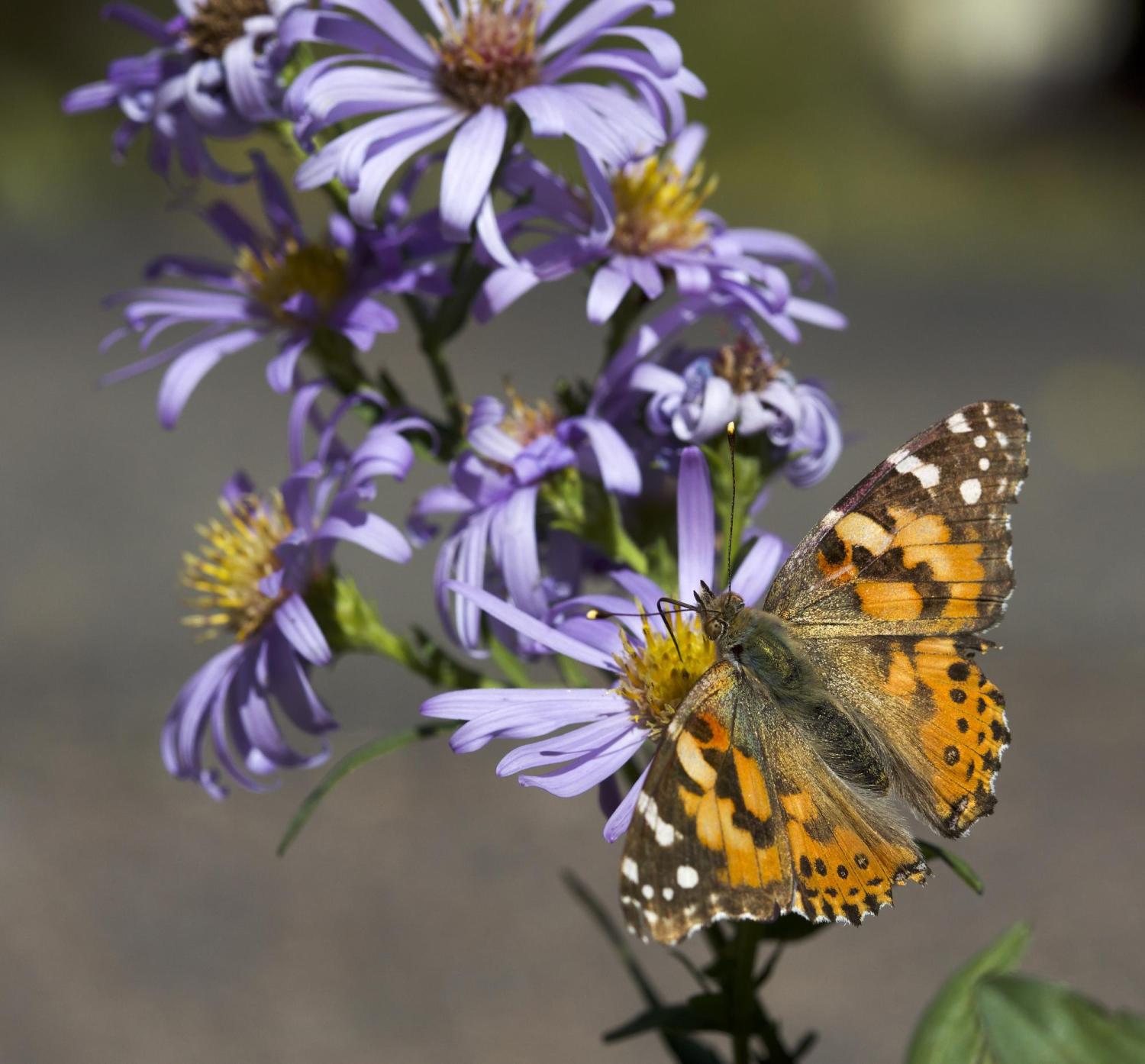 A painted lady fills up on nectar so that it may continue its migration. To see larger image, click here. Photo by Jeff Mitton.

Population sizes and the magnitudes of migrations are notoriously variable, though it is known that abundant flowers in the southern range produce bumper crops of caterpillars and butterflies in spring. Analyses of migrations and weather patterns revealed tight ties to far-reaching weather patterns. El Niño events increase precipitation in the overwintering areas and further north, supporting plant growth and the flush of caterpillar populations. Conversely, La Niña events are associated with small butterfly populations and absence of migrations. Butterfly population sizes also respond to the much longer time periods of the Pacific Decadal Oscillation.

Painted ladies are the most widespread butterfly in the world, occurring on all continents except Antarctica and Australia. From an overwintering area south of the Sahara, they migrate to Europe and the British Isles and reach the Arctic Circle in Scandinavia. I presume they migrate in Asia, but I was unable to find anything in the literature to support my presumption.

In contrast to the large migrations moving north in North America and Europe, observations on the return migration in fall are so scant and scattered that some people have even questioned whether they do return in fall. The enigma of the fall migration was solved by Rothamsted Research, a nonprofit research institute in England, which, among many other research themes, uses radar to track insect movements. They discovered that the fall southern migration was high in the sky, at an average of more than 500 meters above the ground. At that altitude, butterflies would not be visible to a person on the ground. In 2009, Rothamsted reported that 11 million butterflies entered England in the spring migration and 26 million left in fall.

On Oct. 3, Denver weather radar detected a 70-mile wide swarm of butterflies drifting to the northwest. If this was a southern migration, this swarm was headed in the wrong direction, drifting with the wind rather than flying doggedly to the south. The weather radar did not explicitly mention the height at which butterflies were flying; one account described them as flying "close to the ground." But if weather radar detected the immense swarm, I would think that the butterflies needed to be higher than buildings and trees. Perhaps the difficulty of documenting the fall migration in North America is due to butterflies flying high above the ground, as they do in England.

Some experimental data suggest that migrating ladies use a sun compass to orient during migrations.

So memory does not guide butterflies — each generation flies across a landscape that it has never seen, guided by instinct and a sun compass.

An amplectic pair of treehoppers, Telamona monticola, was on a CU sidewalk beneath a swamp oak tree, Quercus bicolor. I surmised that they tumbled from the tree while delicately adjusting their positions. I collected the treehoppers to photograph them and 7 hours later they were still amplectic. END_OF_DOCUMENT_TOKEN_TO_BE_REPLACED

With pendant urns, this perennial lofts its seeds with feathery plumes. END_OF_DOCUMENT_TOKEN_TO_BE_REPLACED

The Boulder Chickadee Study is a collaborative, long term effort between Kathryn Grabenstein, a PhD candidate in ecology and evolutionary biology at the University of Colorado Boulder, and her thesis advisor, Scott Taylor, to examine hybridization. END_OF_DOCUMENT_TOKEN_TO_BE_REPLACED
Categories:
Tags:
Return to the top of the page