I have been to Ouray, Colo., many times, but this summer the view was distressing. The town of Ouray is at the base of Red Mountain Pass, and directly above the town is the aptly named Amphitheater Campground, managed by the U.S. Forest Service.

Ouray’s amphitheater is formed by walls of rich red sandstone draped with the deep green of several species of conifers, but now, the magnificent amphitheater is sullied with the red of dying white fir, Abies concolor. Another bark beetle epidemic has begun. 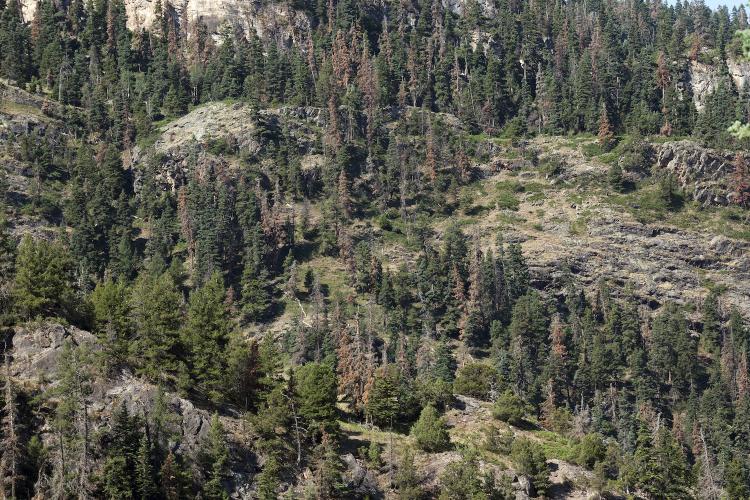 An infestation of fir engravers is killing white fir near Ouray. Click here for larger image. Photo by Jeff Mitton.

The white firs seen in Boulder are ornamentals; Civilian Conservation Core workers brought white firs from Pikes Peak to the University of Colorado Boulder campus in the early 1930s.

The fir engraver, Scolytus ventralis, is related to the mountain pine beetle and the spruce beetle, and all three of them cause epidemics by using the phloem, the inner bark layer of tissue that transports sugars, as a nursery for their young.

The fir engraver is a native to the fir forests of the west, from British Columbia to Baja, and from coastal forests east to Montana and Colorado. They are known for their epidemics in white fir, grand fir and noble fir, but most epidemics are in California, Oregon, Washington and British Columbia.

Engravers will kill a few Douglas-fir and western hemlock if they are intermixed with their primary hosts. Fortunately, they rarely attack subalpine fir.

The life cycle of fir engravers can be less than one year in warm, low-elevation sites and a full two years in high elevation, cold sites. An adult female chooses a tree and burrows through the bark into the interface between the phloem and the xylem or wood.

She digs an egg gallery at this interface, scoring the wood as she digs a horizontal gallery about one foot long. Females lay 100 to 300 eggs, and the larvae then dig tunnels at right angles to the egg gallery, either up or down.

Engravers get their common name from the traces of the gallery dug partially in wood and therefore visible long after the offspring have left and the bark has fallen from the tree. The beetle inoculates the egg gallery with a fungus, Trichosporum symbioticum, which, in combination with tunneling damage to the phloem, kills the local portions of the tree.

This flurry of epidemics is no coincidence. Each of the bark beetle species is known to attack compromised trees, and one of the most common triggers of epidemics is prolonged drought."

If many engravers bore into the trunk in a single season, the tree may be killed. But if only a few beetles attack the tree, then strips of trunk, or the very top of the tree, or single branches may be killed. With no attacks in subsequent years, the firs can survive these attacks.

However, engravers preferentially attack trees compromised by parasites or fungal infection, so if the beetle epidemic continues, trees that survived attacks will probably be attacked again and again. In Ouray this summer, some trees had died but many trees had either lost just the top or one of the major branches. Some of the dead trees had diameters greater than three feet.

Bark beetles have assailed Colorado in the last decade. The mountain pine beetle epidemic in lodgepole pine and limber pine ended a few years ago, but it was the biggest ever recorded.

The spruce beetle epidemic is in Engelmann spruce, and it is still raging in subalpine forests. Fir engravers were noted several years ago in the San Juan Mountains, and their epidemic is still growing.

This flurry of epidemics is no coincidence. Each of the bark beetle species is known to attack compromised trees, and one of the most common triggers of epidemics is prolonged drought.

Growing seasons for trees have lengthened with climate change, so trees are trying to grow for a longer period, but without any increase in water. When trees are drought stressed they are unable to sustain resin pressure and are more susceptible to bark beetle attacks.

An amplectic pair of treehoppers, Telamona monticola, was on a CU sidewalk beneath a swamp oak tree, Quercus bicolor. I surmised that they tumbled from the tree while delicately adjusting their positions. I collected the treehoppers to photograph them and 7 hours later they were still amplectic. END_OF_DOCUMENT_TOKEN_TO_BE_REPLACED

With pendant urns, this perennial lofts its seeds with feathery plumes. END_OF_DOCUMENT_TOKEN_TO_BE_REPLACED

The Boulder Chickadee Study is a collaborative, long term effort between Kathryn Grabenstein, a PhD candidate in ecology and evolutionary biology at the University of Colorado Boulder, and her thesis advisor, Scott Taylor, to examine hybridization. END_OF_DOCUMENT_TOKEN_TO_BE_REPLACED
Categories:
Tags:
Return to the top of the page