I had chosen a dispersed camping site on the Uncompahgre Plateau for its proximity to a small reservoir and a large meadow. But when I drove into the site, I found it was littered, not with refuse, but with tops of subalpine firs.

This was initially puzzling and it caused me to consider restrictions placed on adaptation by conflicting selective pressures. 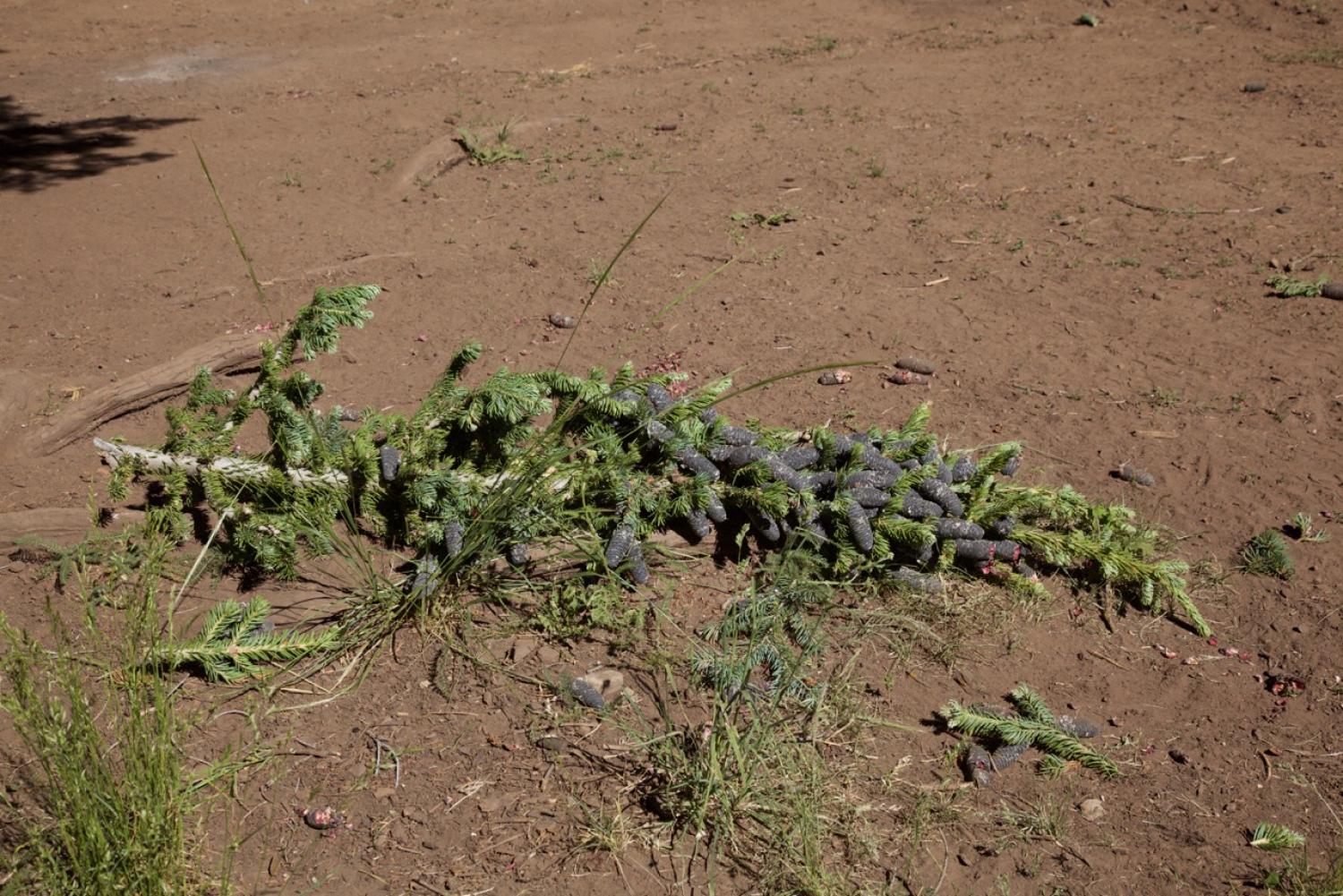 My campsite was at the edge of a spruce-fir forest where trees were large, with diameters of a foot or more, and heights of 35 to 50 feet. About 15 tops of trees, 6 to 12 feet long and bearing 50 to 100 cones, littered the spacious campsite. Although Engelmann spruce (Picea engelmannii) and subalpine fir (Abies lasiocarpa) were equally abundant around the campsite, only fir trees were damaged.

Like many conifers in the west, subalpine fir is a masting species, meaning that cone crops vary immensely from year to year, from zero to hundreds of cones per tree. Masting usually occurs over large geographic areas and often includes multiple species. Cone production is certainly driven by weather, particularly precipitation, but other factors play a role as well.

For example, it is commonly the case that cones are scant the year after a mast. The variability in cone crops may also be sustained by selection imposed by seed predators, which can take a heavy toll in years when cones are scarce, but take an inconsequential proportion when cones are abundant. The role of seed predator satiation in evolution of masting is a controversial topic.

When high winds damage trees by blowing them down, snapping the trunk, or breaking branches, the resulting wood on the ground is called blowdown. High wind events occur in a variety of circumstances, such as the movement of a weather front or during thunderstorms, which produce not only high winds but also microbursts, sudden downbursts of wind that strike the ground with speeds exceeding 100 mph.

The largest blowdown ever recorded in the Rocky Mountains occurred on the evening of Oct. 24, 1997, in the Mount Zirkle Wilderness. Fierce winds, estimated at 120 mph, developed at the edge of a low pressure zone and flattened 20,000 acres of mature Engelmann spruce and subalpine fir in an area 25 miles long and several miles wide.

One night after dinner the piles of fir cones got me to thinking. It seems curious that trees would produce more cones than they could hold, but like many other species, firs contend with conflicting demands on their energy budgets. While developmental processes manage the apportionment of energy, it may be more familiar and intuitive to speak in terms of a tree making carefully considered decisions.

Trees must make decisions concerning the investment of their available energy.

For example, how much energy should be invested in resin plant defenses versus growth and reproduction? What proportion of energy should be invested in growth versus reproduction? Should growth be via fast elongation of relatively soft, weak wood or slower elongation of stronger wood? Ultimately, the best decisions produce the greatest yield of offspring in the next generation, which is the metric of natural selection.

I had stumbled upon a convergence of two relatively rare conditions. Strong winds had raked the western slope of Colorado the day before I came to the Uncompahgre Plateau. Most of the time, the tops of subalpine firs are slender, flexible spires, not susceptible to wind damage. But this year heavy cone crops increased both wind resistances and weights of the top of the trees, testing their strength and flexibility.

An amplectic pair of treehoppers, Telamona monticola, was on a CU sidewalk beneath a swamp oak tree, Quercus bicolor. I surmised that they tumbled from the tree while delicately adjusting their positions. I collected the treehoppers to photograph them and 7 hours later they were still amplectic. END_OF_DOCUMENT_TOKEN_TO_BE_REPLACED

With pendant urns, this perennial lofts its seeds with feathery plumes. END_OF_DOCUMENT_TOKEN_TO_BE_REPLACED

The Boulder Chickadee Study is a collaborative, long term effort between Kathryn Grabenstein, a PhD candidate in ecology and evolutionary biology at the University of Colorado Boulder, and her thesis advisor, Scott Taylor, to examine hybridization. END_OF_DOCUMENT_TOKEN_TO_BE_REPLACED
Categories:
Tags:
Return to the top of the page