An amplectic pair of treehoppers, Telamona monticola, was on a CU sidewalk beneath a swamp oak tree, Quercus bicolor. I surmised that they tumbled from the tree while delicately adjusting their positions. I collected the treehoppers to photograph them and 7 hours later they were still amplectic; the literature reports a pair that persisted for over 27 hours. T. monticola feed on the sap of a wide variety of oaks from North Dakota to Maine and from Nevada to Florida.

I rely on the experts who know so much more than I do. Vincent Aquino, CU campus arborist, identified the oak and Matthew Wallace, professor of biology at East Stroudsburg University in Pennsylvania, identified the treehoppers.

T. monticola are strange looking insects, as you can plainly see in the photograph. Their entire surface is dimpled (technically, punctate) and they have brown, green and yellow blotches. They have two large compound eyes to focus images, and between them, simple eyes (ocelli) that discern sunlight, shade and night. But their most distinctive feature is that high, narrow dorsal crest, referred to as a helmet. Treehopper species seem to specialize in bizarre helmets. 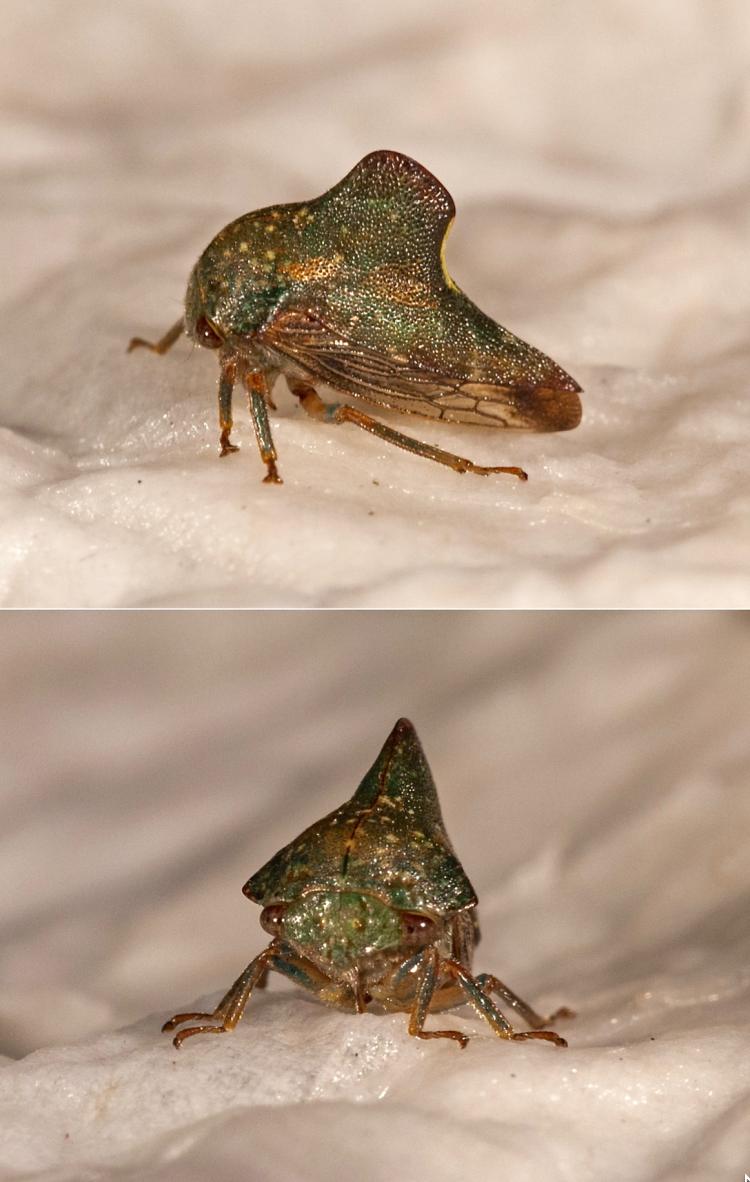 A local treehopper, Telamona monticola, has 4 eyes, a pronounced dorsal crest, and utilizes oaks for mating and feeding. Photo by Jeff Mitton

Helmets look like part of the head, but careful studies of anatomy revealed that a joint to the first abdominal segment attaches the helmet. Developmental studies indicate that the genes usually employed to develop wings in other insects produce the helmet in treehoppers. But wings come from either the second or third abdominal segments in winged insects, including treehoppers, so the helmet is an intriguing evolutionary novelty.

Treehopper species exhibit a remarkable range of forms, and some are truly outrageous. Bocydium globulare (Google it!) is so dramatic that many people, first seeing a photo or model, declare it to be a fake. But it is real, in tropical forests in northern South America. Rising directly up from the head is a stout column that splits into one long and four short spines, vaguely resembling helicopter blades. But on the spines are five prominent, punctate balls with sparse, long hairs. This curious helmet is almost as large as the treehopper’s body, and its function is a fascinating mystery.

Other species of treehoppers have prominent horns or structures that are cryptic, helping the animal blend into its background. One species has a helmet that drapes over the body and mimics an ant.

T. monticola is considered a generalist species, for it feeds on a variety of hosts, but it is restricted to oaks. Males, while searching for females, can fly or hop to nearby oaks, moving from one oak species to another. But many of the treehoppers are specialists, confined to just a single host species. Specialists become adapted to the growing season and chemical ecology of their host and in some treehoppers the specialism leads to a specific mode of speciation.

Allopatric speciation is the most commonly accepted mode of speciation; it requires geographic separation and considerable time for populations of one species to become adapted to different environments and evolve mechanisms that prevent mating. However, herbivorous species specializing on a single host species have provided data indicating that if, for any reason, a population switches host species, it can kick off a series of evolutionary changes leading to speciation, even if the host species are nearby or even intermixed.

Although its ancestors were probably generalists, E. binotata became a specialist on butternut or white walnut, a tree. But then some of its descendants shifted to become specialists on black walnut. Today, the E. binotata species complex utilizes a vine and 5 species of trees or shrubs. Although they have not yet been named different species, they do not mate with those on other hosts. Furthermore, if eggs are moved to a different host, most of the larvae die, indicating that the specialists are narrowly adapted to a single host.

All indications are that sympatric speciation occurs relatively quickly. Treehoppers have taught evolutionary biologists much about speciation and studies of their outrageous helmets show promise of revealing much more about development and speciation 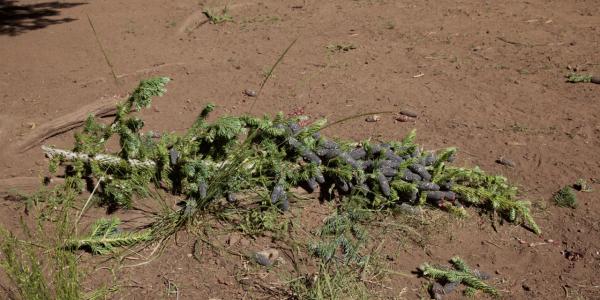 I had chosen a dispersed camping site on the Uncompahgre Plateau for its proximity to a small reservoir and a large meadow. But when I drove into the site, I found it was littered, not with refuse, but with tops of subalpine firs. END_OF_DOCUMENT_TOKEN_TO_BE_REPLACED

With pendant urns, this perennial lofts its seeds with feathery plumes. END_OF_DOCUMENT_TOKEN_TO_BE_REPLACED

The Boulder Chickadee Study is a collaborative, long term effort between Kathryn Grabenstein, a PhD candidate in ecology and evolutionary biology at the University of Colorado Boulder, and her thesis advisor, Scott Taylor, to examine hybridization. END_OF_DOCUMENT_TOKEN_TO_BE_REPLACED
Categories:
Tags:
Return to the top of the page