Marina Kassianidou, who is 'obsessed by the idea of marking,' has received the Joan Mitchell Foundation Painters and Sculptors Grant

To those who aren’t art professors, students, historians or fine artist themselves, much of the joy derived from viewing what’s commonly called abstract art (though the artists might just call it “art”) is derived from seeing something for the first time, an image or format entirely new to the viewer and their experience.

It might be aesthetically pleasing, but hopefully it makes you think about questions you’ve never contemplated before. It should transport you, if only momentarily, to a foreign intellectual space you’ve never quite inhabited.

Such is the space you might find yourself in while visiting the studio of Marina Kassianidou, assistant professor in the Art and Art History Department at the University of Colorado Boulder and recent recipient of the Joan Mitchell Foundation Painters and Sculptors Grant, for which artists throughout the United States are nominated anonymously, and a jury of visual artists, curators and educators select its 25 annual honorees.

Step into the studio. Look at the glass windowpane propped atop the desk, leaning against the wall, and what seem to be raindrops frozen in time, covering the glass… Look at the footprint on the vinyl floor-tile hanging there on the wall… Take a close look at that photo of a concrete floor. Each and every fracture and crevice in the natural concrete appears to have a duplicated shadow positioned three inches to the right of the original crack. 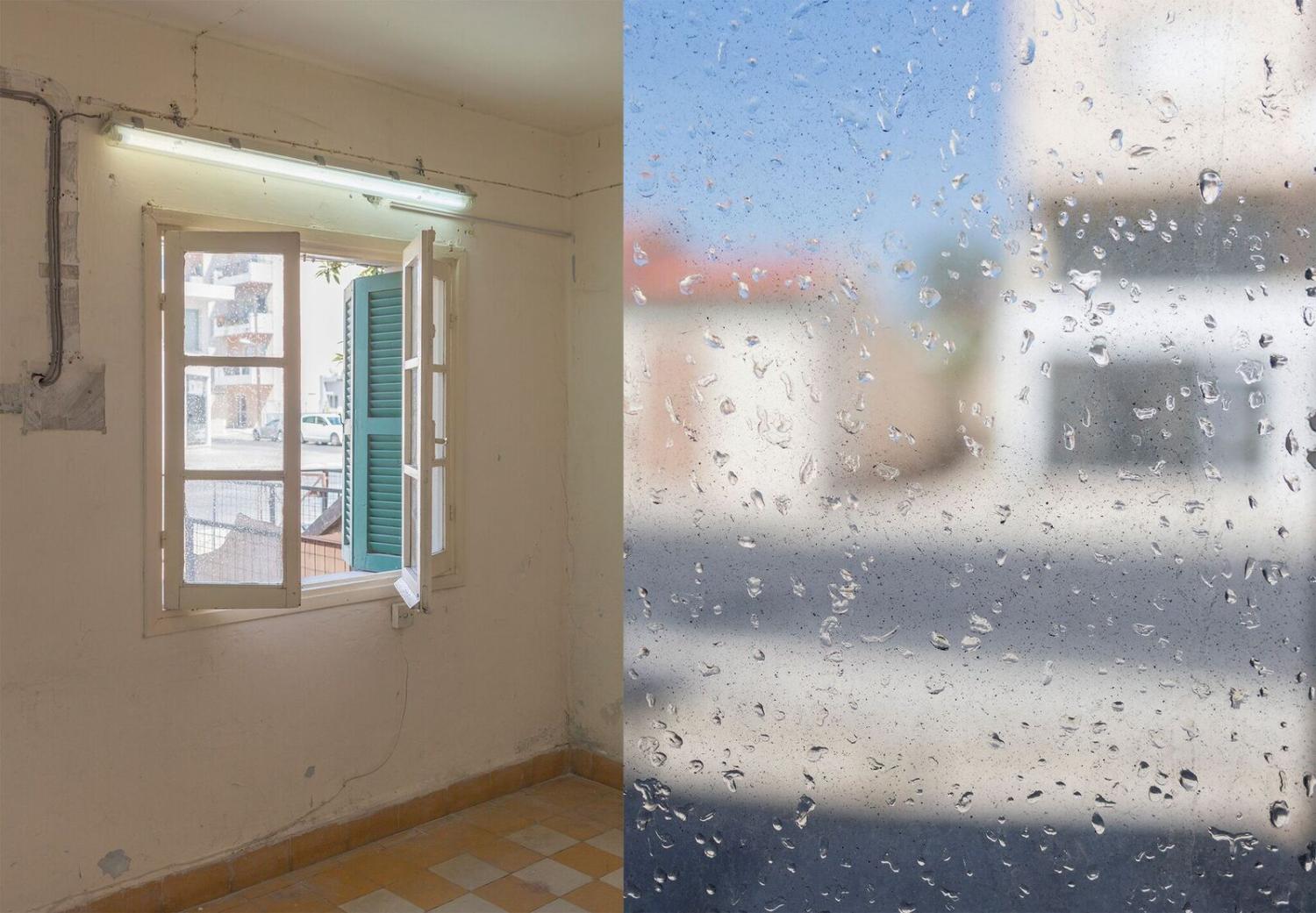 The raindrops (“Rain,” 2016) are acrylic and were painted by Kassianidou, who teaches painting and drawing at CU Boulder.

“Here, I remade the raindrops on the inside of the glass based on all the traces of past raindrops that I could see on the outside,” she said. “You can see a trace where each raindrop came down.”

“The painted raindrops will never evaporate and disappear,” reads the artist’s online portfolio. “Instead, they create an uneven texture on the glass that can be felt via touching.”

The vinyl floor tiles are “stain paintings” that Kassianidou traced from markings on a floor that she’d been standing and working on, then re-created on the vinyl tiling.

The photograph of the concrete floor was taken in the Thkio Ppalies Artist-Led Project Space of Nicosia, Cyprus, the Mediterranean island-country Kassianidou calls home. The piece, called “23 x 2” (2016), is an impressive, site-specific installation that uses a rectangular, concrete floor measuring 50 by 25 feet as its canvas.

“I walked through that space multiple times over a series of months trying to figure out how I was going to respond to it. And it was slowly over time that I started noticing these cracks that were kind of separating the space,” or breaking the floor apart.

“There were these very regular ones, and these more-irregular ones. So that became the thing in this space that I could hold onto and say, ‘OK. This is what I’m responding to.’”

Although the aim of Kassianidou’s work was never to create an illusion, “23 x 2” appears as though she had printed a photograph of the entire original floor on translucent film and laid it over the original surface in order to give every crack and imperfect line an identical evenly spaced silhouette.

“I’m kind of obsessed with the process of marking,” said Kassianidou of her work. “I’m interested in this idea that when you mark a surface, you’re trying to communicate some meaning, or tell the world you exist in some way. It’s a very simple process in itself, leaving a mark somewhere, but I think it has much bigger implications than that.”

“I like to use materials that are available in my immediate surroundings,” she said, pointing to a collage on fabric and laminate flooring, paintings on vinyl flooring, and drawings on index cards. 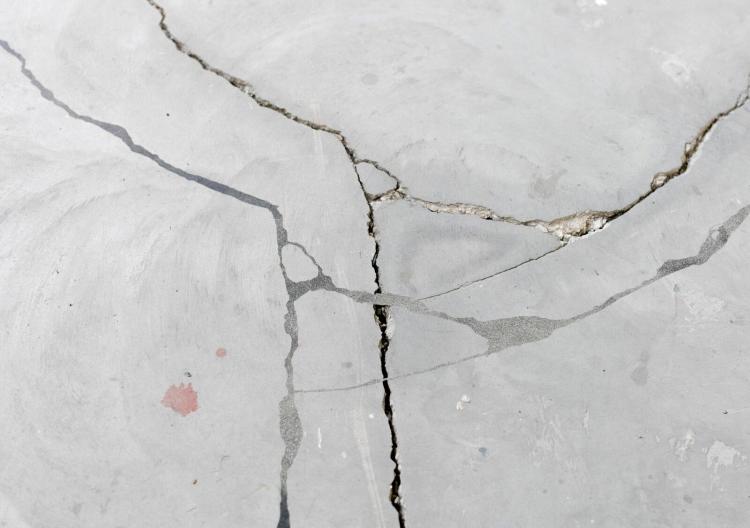 Kassianidou’s approach to painting, drawing, collage and other forms, she explained, is a way of relating to whatever surface she’s using. “I want my work to respond to something already there,” she said. So the choices she makes when creating her work, “the colors, the placement…” all have a great deal to do with the original, intended purpose of the surface, how it looks, what it’s made from or a multitude of other aspects that she connects with.

According to psychoanalytic theory, Kassianidou said, children mark up paper, walls and surfaces to “negotiate the relationship they’re just starting to have with the world,” which is what she contends she, herself, is doing.

But Kassianidou’s work also wrestles with the idea of “material/surface” and “artist/marker” being assigned, by definition, “passive” and “active” roles. If a surface can only be passive, “receiving” a mark, while the artist must then only be active and autonomous, Kassianidou disagrees with these fixed definitions and bases much of her objective on her discomfort with these designations.

“Cyprus was a British colony,” she said, introducing a deeper comparison between the “active marker/passive surface” idea and a colonizing nation with the state it colonizes. She wasn’t always preoccupied with the concept, but, rather, drew the connection later on. “So, we’re kind of in a perpetual post-colonial stage. I was thinking about colonialism in those terms. Another nation comes into a territory and treats that territory like a blank surface, so they ignore what was already there and impose whatever they want onto that.”

“Is there another way,” asked Kassianidou, “of making art that is not caught up in this strange dynamic of mark versus surface, or activity versus passivity, or presence versus absence? Is there another way of approaching this that does away with all that?”

Kassianidou is going to spend much of her grant funding to acquire new material to use in her work. “I’m in that stage where I need to see what’s around me and start experimenting,” she said. “I’m going to do some research-traveling around the U.S. As you can see, I like to find interesting spaces in which to work.” 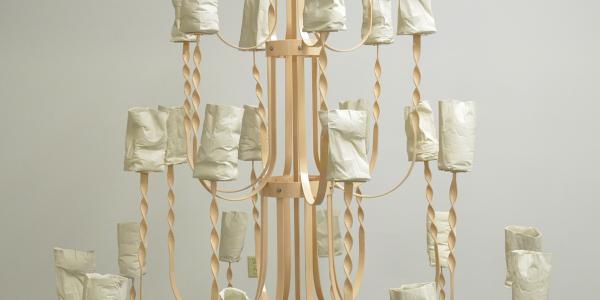 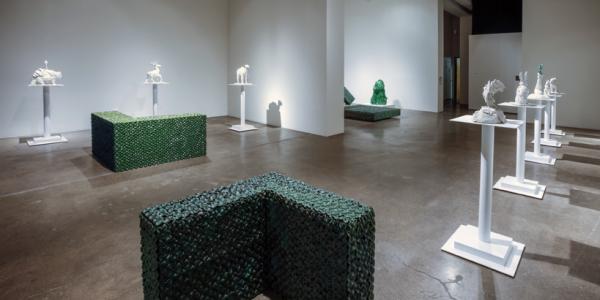 The graduate ceramics program at CU Boulder is ranked fifth in the nation, up from eighth last year, in US News and World Report’s Best Graduate Schools 2017. It is one of eight university programs to be ranked in the top 10 graduate specialty programs nationwide, but it is the only one of the CU Boulder group to hail from the arts and humanities. END_OF_DOCUMENT_TOKEN_TO_BE_REPLACED 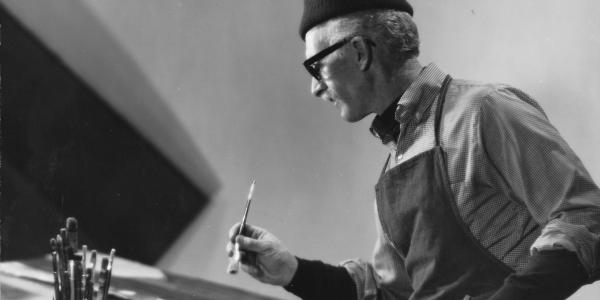 Art and Art History Department celebrates the life, work and hundredth birthday of one of its formative faculty members; exhibition of Lynn R. Wolfe’s work runs from July 7 to Aug. 31. END_OF_DOCUMENT_TOKEN_TO_BE_REPLACED
Tags:
Return to the top of the page