While camping on the White River Plateau last weekend I was pleasantly surprised to find that a few of the aspen clones had turned from deep green to bright yellow. It occurred to me that the wonders of fall foliage raise yet a more mechanistic wonder: Why do aspen and other deciduous trees change color in fall?

Most deciduous trees have three pigments in their leaves: chlorophyll, carotenoids and xanthophylls. Chlorophyll is a green pigment in chloroplasts that absorbs light to capture energy and take carbon dioxide from the air to make sugars. In spring and summer, chlorophyll is the most abundant pigment and thus the leaves are green.

Carotenoids are a series of related pigments that produce both yellow and orange hues. These pigments are synthesized in spring when leaves develop and they persist through summer and into fall, masked by the predominant green of chlorophyll. Carotenoids reside both in chloroplasts and in membranes. 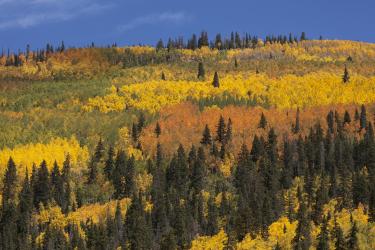 The aspen in Big Blue Creek display variation in both development and color of fall foliage.

The seasonal senescence of leaves that produces fall colors is not a time of simple withering of leaves, but a metabolically active process of withdrawing nutrients from the leaves. Some genes are activated in fall to withdraw nitrogen and chlorophyll from the leaves and respiration rates increase as metabolites are transported.

As chlorophyll is withdrawn from the leaves, the yellows and orange carotenoids become apparent. Because the carotenoids were present all summer but only become visible as chlorophyll is withdrawn, some biologists presumed that the elaboration of fall colors was simply a consequence of the export of chlorophyll, and that the development of bright colors did not serve any purpose. This is a reasonable inference for carotenoids, but it does not explain the dynamics of anthocyanins, which produce the red colors and are found in vacuoles (storage compartments) in the leaves.

Anthocyanins are synthesized in the fall, when approximately half of the chlorophyll has been transported from leaves. Because anthocyanins appear in the fall, when respiration is high and photosynthesis is diminshing, it is reasonable to wonder what purpose, beyond glowing colors, these pigments serve.

Evolutionary biologists proposed the hypothesis that anthocyanins are synthesized to produce bright fall colors to warn aphids that bright trees were highly defended by chemical compounds. They compared many species of deciduous trees, and indeed, the diversity of aphids was highest in species with bright fall colors. These data were consistent with their hypothesis, but they did not show that bright trees had greater defenses, and other scientists felt that the association of aphid diversity and bright foliage had other interpretations.

Plant physiologists developed the hypothesis that the anthocyanins play some protective role for leaf processes in the fall. Specifically, they proposed that the red pigments act as sunscreen to protect the physiological processes evacuating metabolites from the leaves. As chlorophyll is removed, it becomes easier for light, even the low light of fall, to saturate the remaining chlorophyll and inhibit photosynthesis, thereby stalling the rescue of metabolites. They found that species with high levels of anthocyanins have fewer incidences of light inhibition. This result is consistent with the hypothesis that anthocyanins function as sunscreen, protecting important physiological processes. But they did not show that high anthocyanin production provided more complete rescue of leaf metabolites.

Both the evolutionary (warning signal) and physiological (sunscreen) hypotheses have data consistent with them, so both are currently considered to be plausible. It seems to me that more data support the sunscreen hypothesis, but neither is yet considered to be compelling.

Enjoy the fall colors. And perhaps it will make your experience more enjoyable to know that the wonder of fall colors still has biologists wondering. 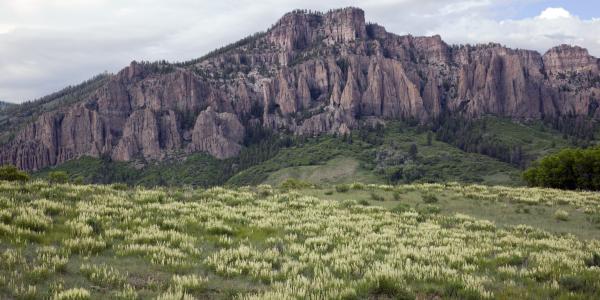 Driving in to the Ponderosa Campground in Soap Creek, I was surprised to see a field of white flowers arranged in towers that seemed to mimic the dramatic spires in the cliffs on the other side of Blue Mesa Reservoir. I pulled over to enjoy the view and to capture it digitally. I walked among the flowers briefly, and I noticed many pollinators but no herbivores—nothing was eating the leaves or stems. END_OF_DOCUMENT_TOKEN_TO_BE_REPLACED

With pendant urns, this perennial lofts its seeds with feathery plumes. END_OF_DOCUMENT_TOKEN_TO_BE_REPLACED

The world is full of robber flies—approximately 7,000 species have been recognized worldwide and 1,000 are native to North America END_OF_DOCUMENT_TOKEN_TO_BE_REPLACED
Categories:
Return to the top of the page