Driving in to the Ponderosa Campground in Soap Creek, I was surprised to see a field of white flowers arranged in towers that seemed to mimic the dramatic spires in the cliffs on the other side of Blue Mesa Reservoir. I pulled over to enjoy the view and to capture it digitally. I walked among the flowers briefly, and I noticed many pollinators but no herbivores—nothing was eating the leaves or stems.

Shortly thereafter I was setting up my tent and I paused to talk to a guy in a nearby campsite. He was a rancher who liked the vistas at Blue Mesa Reservoir, the fishing, and the uncommon community of large ponderosa pines, aspen and Gambel oak. We were having a friendly conversation until I asked him if he had seen the lovely field of flowers on the approach to the campground. The friendliness went out of his face, and he just stared at me, saying nothing. With alacrity, I changed the subject and his friendly demeanor returned. 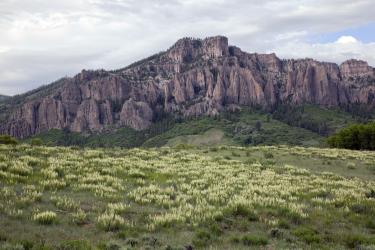 Virtually free of herbivory, locoweed flourishes beneath the needles of Soap Creek.

When I returned to Boulder, my colleague Erin Tripp identified the flowering plant as one of the locoweeds, Oxytropois sericea, which goes by the common name white locoweed. Ranchers despise locoweeds, because they are the greatest cause of livestock poisoning in the west. Now I understand the rancher's cold response to my innocent but provocative question.

Locoweed is a colloquial term referring to the poisonous species in the genus Oxytropis or in the genus Astragalus, both in the legume family. Locoweed is supposed to refer to any of the perennial legumes that produce the poisonous alkaloid swainsonine, but it is sometimes mistakenly used to refer to species of Astragalus that are poisonous due to their accumulation of selenium, a chemical agent that occurs naturally in the soil. This confusion is exacerbated by the fact that some plants both produce swainsonine and accumulate selenium.

Swainsonine poisoning has most often been reported in cows, sheep and horses, but it has also been reported in deer and elk. The toxin inhibits two enzymes in the herbivores, resulting in a set of irreversible neurological symptoms referred to as locoism. Minor cases reduce growth and reproduction, but major cases cause loss of appetite and weight, ultimately causing death.

Most chemical plant defenses, such as the iridoid glycosides of milkweeds and the monoterpenes of pine trees, are synthesized by the plants. But swainsonine in locoweeds is produced by an endosymbiont, a fungus that lives inside the plant tissues.

The genus Undilum contains the fungal endosymbionts that live within the tissues of their hosts. Undilum sericea is found only in white locoweed, Oxytropis sericea. Other locoweeds have different species of Undilum living in them. The fungus in a mature plant is incorporated in seeds, so that each seedling starts life inoculated with the fungus that makes it poisonous.

Swainsonine deters feeding by rats, but cows, sheep, horses, deer and elk find locoweeds palatable. Most chemical defenses produce a fragrance or taste that warns herbivores of dire consequences if the herbivore continues to eat the plant. But locoweed does not produce feeding aversion via fragrance or taste in any animals except rodents. Locoism, also called intoxication, does not appear until cattle and horses have been consuming locoweeds for several weeks. Once the symptoms appear, the damage is irreversible. 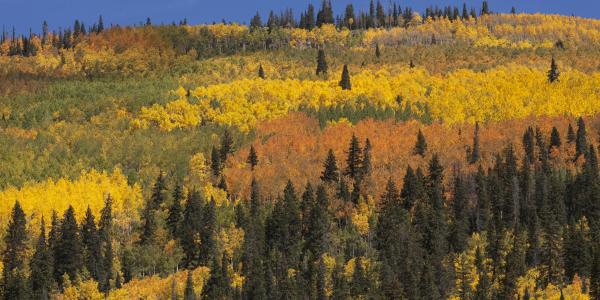 While camping on the White River Plateau last weekend I was pleasantly surprised to find that a few of the aspen clones had turned from deep green to bright yellow. It occurred to me that the wonders of fall foliage raise yet a more mechanistic wonder: Why do aspen and other deciduous trees change color in fall? END_OF_DOCUMENT_TOKEN_TO_BE_REPLACED

With pendant urns, this perennial lofts its seeds with feathery plumes. END_OF_DOCUMENT_TOKEN_TO_BE_REPLACED

The world is full of robber flies—approximately 7,000 species have been recognized worldwide and 1,000 are native to North America END_OF_DOCUMENT_TOKEN_TO_BE_REPLACED
Categories:
Return to the top of the page