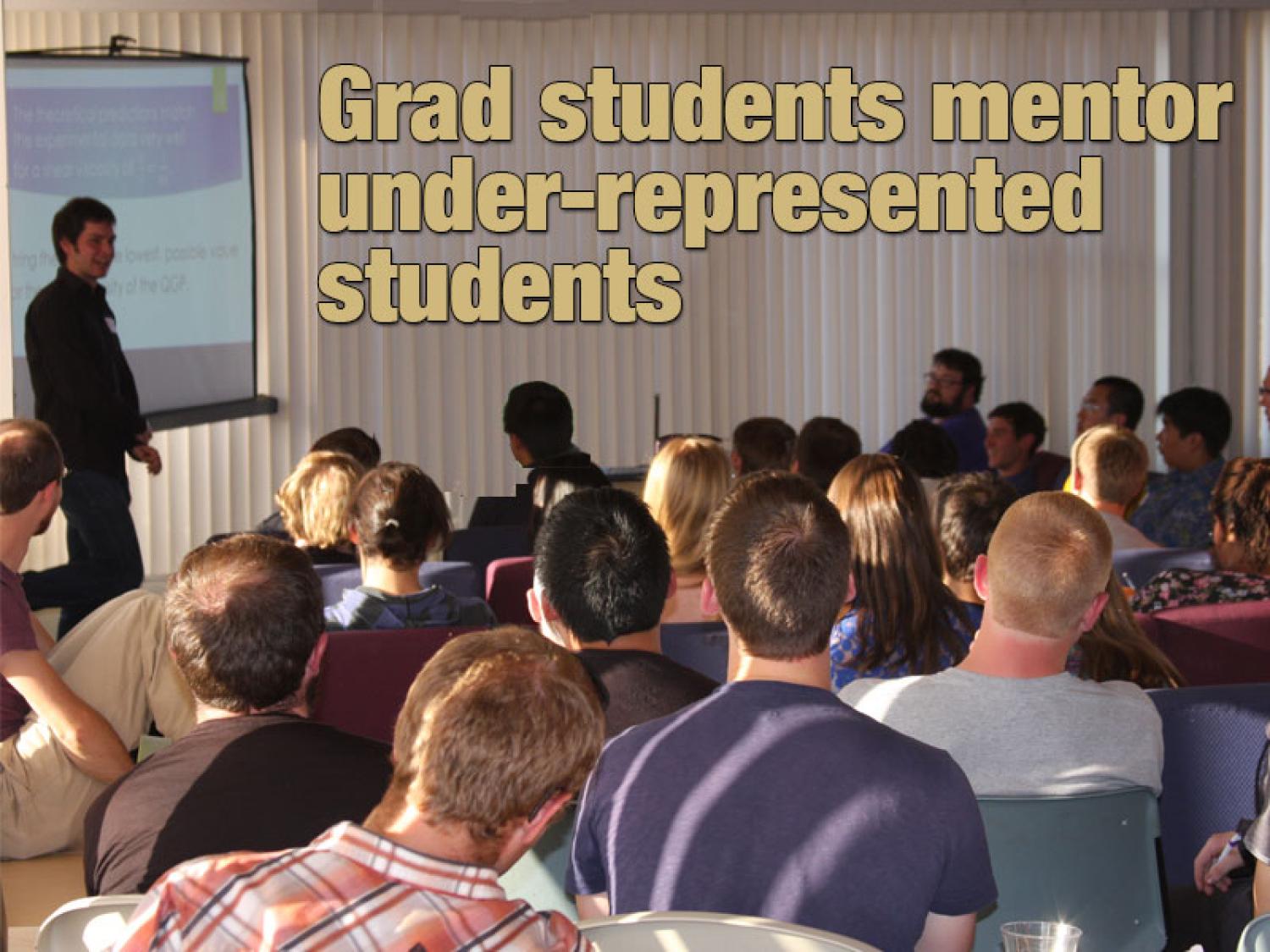 Mathis Habich, a graduate student in physics (standing in front of screen), gives a presentation to a full house on the top floor of the Gamow Tower as part of the CU-Prime Talks series, which introduce undergraduate students to the day-to-day lives of researchers.

For undergraduates who don’t see professors who look like them, new program aims to help them see natural science as viable career choice

Graduate students at the University of Colorado Boulder have launched a program designed to promote inclusion among under-represented groups in Science, Technology, Engineering and Mathematics—or STEM—majors.

The program, called CU-Prime, is a student-run organization that brings together undergraduates, graduate students and post-doctoral researchers to build a community and promote understanding and enthusiasm for the natural and applied sciences.

The program began in CU-Boulder’s Department of Physics, but its goal ultimately is to expand and include all STEM disciplines.

"Students don’t see themselves as scientists. They don’t see science as something they should be doing, because they lack role models, and they lack a sense of acceptance and inclusion in the community.”

Benjamin Pollard, a fourth-year graduate student in physics, is one of the leaders of CU-Prime, which is modeled after The Compass Project, a ground-breaking program at the University of California, Berkeley.

CU-Prime aims to help students decide on their major course of study and their career “for the right sort of reasons.”

Many students come to college interested in studying science, but many fewer leave with a degree in the natural sciences.

“A lot of that is because students don’t see themselves as scientists,” Pollard says. “They don’t see science as something they should be doing, because they lack role models, and they lack a sense of acceptance and inclusion in the community.”

Under-represented students—ethnic minorities, women, first-generation students and low-income students—might feel something like this: “I’m interested in this topic, but I don’t see anyone like me doing it right now, and so I feel like I would be excluded from the community that I would like to take part in.”

The students who become graduate students and professors in STEM fields tend to be white males from an academic background.

Second is a class for first-year students who have enrolled in introductory physics. The students might be planning to major in physics, another natural science or even engineering.

The one-credit course is called “Fundamentals of Scientific Inquiry” and is, among other things, an overview of the scientific method. The instructors discuss what it is to be a scientist and how a scientist develops models.

“It gives students the opportunity to do science more like a scientist would,” Pollard said. The traditional introductory physics course is a good foundation, “but it’s very far removed from what makes science exciting to us.”

"Our graduate students, who have an enormous amount of capacity on the one hand and resourcefulness on another, have decided to become agents of change at the university.”

“So we wanted to give students the opportunity to see what it’s like to be a scientist in real life.”

One section of the class focuses on how light works. The instructors demonstrate experiments involving a light source, a hole in a card and a screen. “We see how the light moves through the hole, how an image is created, and we let students discover on their own how the image changes based on how you set up the light and the screen.”

“It’s surprising, even to us, how complex that can be and how much is in such a simple experiment,” Pollard observes. That experiment is a model for how one organizes observations into a cohesive understanding.

Then, students are allowed to choose another topic of their own interests. At the end of the class, small groups of students work together on a variety of topics. They share results at the end.

“Fundamentals of Scientific Inquiry” is being taught for the first time this fall. Four students are teaching the course; three are graduate students working as part-time teaching assistants paid by the College of Arts and Sciences, and one is an undergraduate paid by the Physics Department.

More than 30 students have been accepted into the program this semester.

The third part of CU-Prime’s program is mentorship. Students are matched with upper-level undergraduate students and graduate students. They will meet once or twice monthly to touch base, to “find out what’s going on in each of their lives and give advice as much as they can.”

The primary goal is to develop a community, Pollard says. “There’s very little interaction between the graduate students and undergrads, and we feel like we have a lot to offer.”

"As graduate students, we have a window on the cutting-edge research that happens on campus. It’s exciting to be able to share that with the undergrads who aren’t normally exposed to everything that goes on in the research labs.”

Another goal is to share “cool science,” Pollard notes. “As graduate students, we have a window on the cutting-edge research that happens on campus. It’s exciting to be able to share that with the undergrads who aren’t normally exposed to everything that goes on in the research labs.” Additionally, CU-Prime facilitates students finding undergraduate research opportunities.

The talks have been held for the last year, and there’s no shortage of graduate students willing to give presentations. In fact, there’s a waiting list.

But before graduate students give presentations to undergraduates, they give a practice talk to other grad students. The aim is to ensure that the presentations are accessible to the younger students.

“When you get so involved in your own research, you forget what it’s like not to be living and breathing it. You have to take a step back and realize what needs to be established as a foundation before what you do really becomes meaningful. You also need to put your work in context of what interests the larger population.”

“It’s not just being understood, but being relevant.” 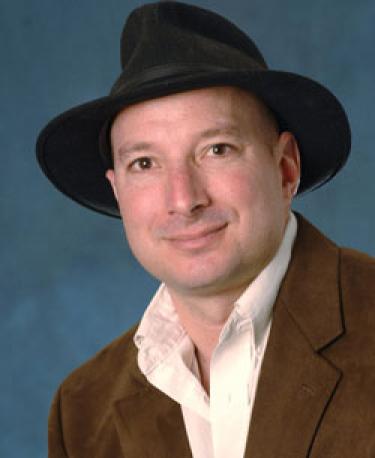 Noah Finkelstein, professor of physics and a director of the CU Center for STEM Learning, has high praise for CU-Prime:

“This is both the kind of program that we’d want to showcase, but also the reason that (CU-Boulder) gets called out for attention, because we’re in the midst of innovating and building out programs that support undergraduates.”

One of the UC-Berkeley Compass Project’s founders, now a post-doctoral researcher at CU-Boulder, gave a talk here about the Berkeley program. The presentation inspired graduate students here, Finkelstein says.

“It’s a fabulous example of how the university adapts to changing circumstances and continuously strives to improve, and the power of grass-roots movement and graduates looking to improve the community,” he adds.

“Our graduate students, who have an enormous amount of capacity on the one hand and resourcefulness on another, have decided to become agents of change at the university.”

CU-Prime complements national efforts to address the demographic imbalance in physics. The American Physical Society recognizes the need to improve the experience of “non-dominant” students. The APS Bridge Program aims to do this, providing graduate opportunities and preparation for minority students.

The White House Office of Science and Technology Policy is also pursuing STEM-education efforts to encourage more women and under-represented minorities to study and work in these fields.

A key example of this commitment and CU’s national reputation is the recently held event to promote STEM education, jointly sponsored by the White House Office of Science and Technology Policy (as part of the White House College Opportunity Initiative) and CU-Boulder.

“By better supporting and preparing our students in their early undergraduate careers, they’re going to be more likely to stay within physics or at least the STEM fields, and college in general, as a matter of fact,” he says, adding:

Clint Talbott is director of communications and external relations for the College of Arts and Sciences.

The Old Main Cottonwood is indeed getting new life. In October, cuttings were taken from the canopy of the tree by Facilities Management arborists Aquino and Joel Serafin. END_OF_DOCUMENT_TOKEN_TO_BE_REPLACED

Professors in theatre, biology and environmental studies team up to focus on creatively communicating climate science through the arts and social sciences. END_OF_DOCUMENT_TOKEN_TO_BE_REPLACED