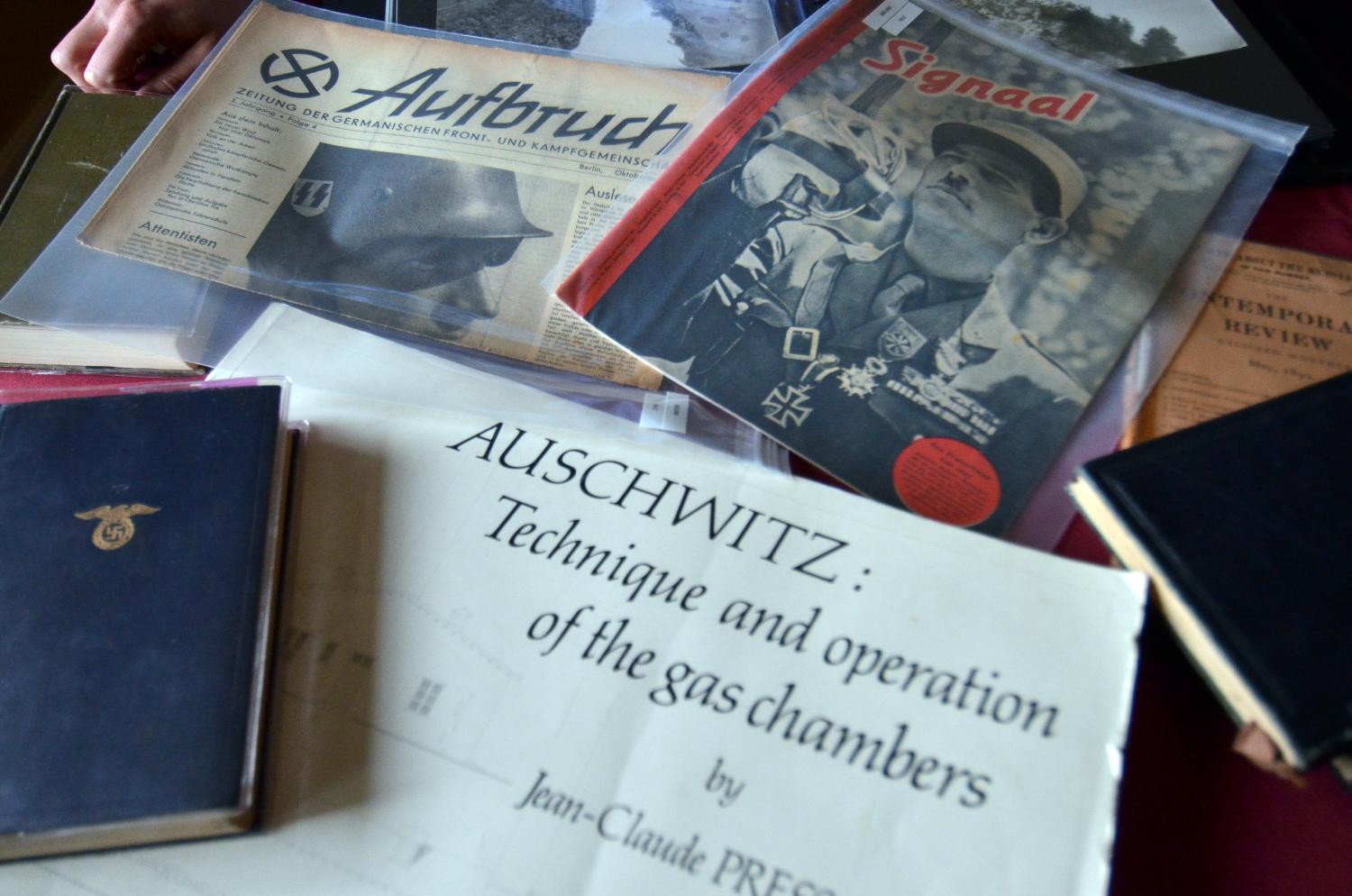 David Shneer, CU-Boulder professor and Jewish Studies program director, displays some of the more than 500,000 pieces of the Mazal Holocaust collection–considered the world’s largest privately held Holocaust archive. The archive collection been donated to CU-Boulder. The book in the lower left, Auschitz: Technique and operation of the gas chambers, is one of only five in print is two are part of the collection. It was compiled after the war to help document the systemic killing. Photo by Glenn Asakawa/University of Colorado

In his University of Colorado Boulder office, David Shneer gestured to material on his table. A rare book there documents the sketches of the building of Auschwitz. Only five copies exist, and the Mazal Holocaust Collection, recently donated to the university, has two.

“The actual operations of genocide, we’re going to learn a lot more about that,” said Shneer, the Louis P. Singer Chair in Jewish History and director of the Program in Jewish Studies.

The donation of the Mazal Holocaust Collection to CU-Boulder is indisputably significant. This is a collection that initially grew from a man’s passion to document the falsehoods spread by Holocaust deniers, and it has been used in court for just that purpose. 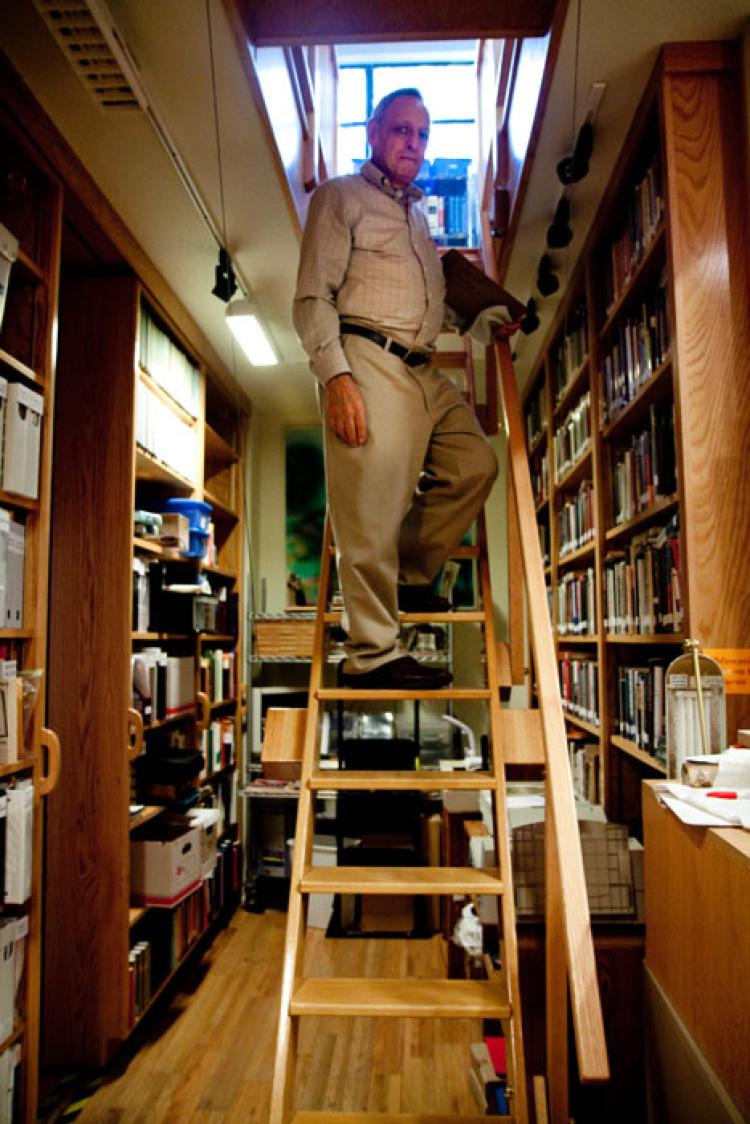 Harry Mazal is photographed in 2010 with a part of his private holocaust library in his San Antonio, TX home. The collection, one of the largest in the world with over 500,000 pieces, has been donated to CU-Boulder. Photo courtesy of the Mazal family

It is the life work of Harry W. Mazal, a retired businessman from Mexico City who made San Antonio, Texas, his home and became an internationally recognized Holocaust collector and researcher.

But Shneer says the Mazal Holocaust Collection is broader than its name suggests. It documents a story of “darkness to light, death to life” in post-Holocaust America and Europe.

Considered the world’s largest privately owned Holocaust archive and the most significant U.S. collection outside of the Holocaust Memorial Museum in Washington, D.C., the collection comprises more than 20,000 books and 500,000 documents, pamphlets, photographs and other materials, including original transcripts of the Nuremburg trials. Five thousand of the volumes are limited editions and rare books.

As a historian of the 20th century Jewish experience, though, Shneer is especially interested in how people remember World War II. “This archive will now become one of the premier places to study memory, especially in places behind the former Iron Curtain, in, say, Poland, Hungary, Czechoslovakia and even the Soviet Union, where our American research libraries are actually quite poor.”

CU-Boulder now has rare volumes from the late 1940s of survivors living in Poland and writing in Yiddish about their experiences during the Holocaust.

“I am constantly blown away by the materials that are in our archive,” Shneer said. On his desk sat aerial photographs of Birkenau and Auschwitz taken in 1944 “documenting the unfolding of the war through the lens of war photographers.”

Yet Holocaust denial persists, even in college classrooms, Shneer noted. “The archive here at CU-Boulder is now going to be a key source for arguing against that kind of contemporary Holocaust denial.

“This archive is obviously primarily about the Holocaust because that’s what the collector’s initial impetus was,” Shneer said. “But it was very clear to me when I was down in San Antonio that he was not just interested in proving that the Holocaust happened. He was also interested in the fact of Jews’ survival.”

The documents CU-Boulder will preserve with this archive are broader than a repository of evidence further documenting the historical truth of the Holocaust, Shneer said.

Taken as a whole, the collection is a “darkness-to-light, death-to-life story,” he said. In some respects it differs from collections such as Yad Vashem in Jerusalem, the world’s largest archive dedicated to the Holocaust.

“The story of ‘darkness to light’ at Yad Vashem is from the Holocaust to the founding of a nation-state for Jews. From a place of powerlessness in Europe, Jews move to a place of power in the state of Israel,” Shneer said.

While critically important, the material on the Holocaust is one part of the story the archives tell, he said. “The story we tell here at the University of Colorado is that after the Holocaust, the United States became the primary, global generator of forward thinking forms of Jewish culture, life and religion.” 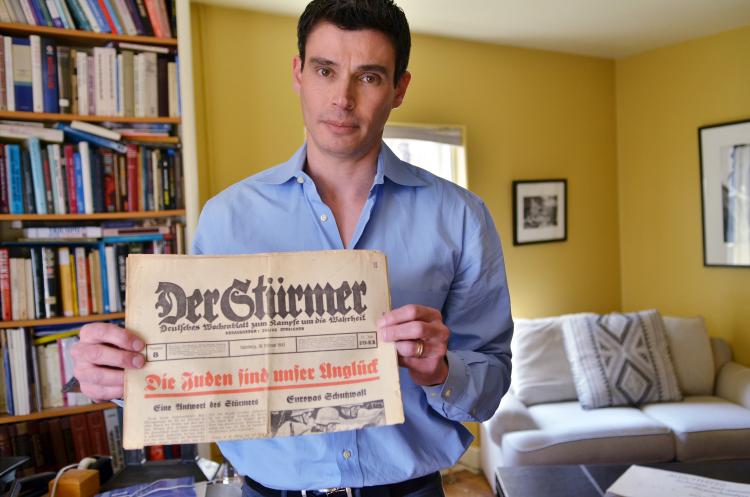 David Shneer, CU-Boulder professor and Jewish Studies program director, holds an original copy of a 1943 German weekly with the headline in red reading: “The Jews are our Misfortune.” The newspaper is one of the more than 500,000 pieces of the Mazal Holocaust collection, which has been donated to CU-Boulder. Photo by Glenn Asakawa/University of Colorado

Quoting Rabbi Irwin Kula, from Clal in New York, credited with being an intellectual inspiration for the ideas underpinning the archive, Shneer said now that the world is generally safe for Jews, it’s time to stop worrying about the continuity of the people and time to start worrying about the purpose of the people. “What do this group of people who call themselves Jews have to contribute to the global conversation? We’re telling that story here at CU.”

The Mazal Holocaust Collection will be housed within the Archive of Post-Holocaust American Judaism. This archive examines Judaism and the Jewish experience through the lens of religious, cultural and social movements in America, as well as various philosophies of Judaism and Jewish organizations from the late 1940s to the present.

The Archive of Post-Holocaust American Judaism includes the most complete collection of materials documenting the Jewish Renewal movement, including the personal collection from the movement’s founder, Rabbi Zalman Schachter-Shalomi, as well as rabbis Arthur Waskow, Leah Novick and Michael Lerner, who also is editor of Tikkun magazine. Together these collections describe the revitalization of Judaism in America since World War II, emphasizing the cultural, ethical and mystical traditions in Judaism and Jewish culture that blossomed in the postwar United States.

Noted scholar Shaul Magid, professor of religious studies and the Jay and Jeannie Schottenstein Chair in Modern Judaism at Indiana University Bloomington, who recently served as the Bender Visiting Scholar at CU, champions ideas demonstrated by CU-Boulder’s Archive of Post-Holocaust American Judaism in his most recent book on American Post-Judaism.

“The Mazal Holocaust Library was everything to Harry,” said daughter Aimee Mazal Skillin of Lone Tree, Colo. “It was his heart and soul, and he made it his mission to debunk Holocaust deniers. His archive material was vast and CU has the capability to maintain, restore and share these valuable resources with the world.”

The materials were donated to Archives and Special Collections in CU-Boulder’s University Libraries and the Program in Jewish Studies. “The collection will enhance scholarship and support research initiatives in a variety of disciplines and programs,” said Steven Leigh, dean of the College of Arts and Sciences.

“One of Harry’s missions in life was education,” said Skillin. “The fact that CU has the resources to make these archives available to students and scholars alike promotes education of the Holocaust. We have no doubt that Harry is smiling from above and are grateful that his collection will live on and continue to educate.”

The Program in Jewish Studies is seeking help to make this collection available to the public; The Post-Holocaust American Judaism Archive Fund has been established for this purpose, and donations can be made on-line here.

The Old Main Cottonwood is indeed getting new life. In October, cuttings were taken from the canopy of the tree by Facilities Management arborists Aquino and Joel Serafin. END_OF_DOCUMENT_TOKEN_TO_BE_REPLACED

Professors in theatre, biology and environmental studies team up to focus on creatively communicating climate science through the arts and social sciences. END_OF_DOCUMENT_TOKEN_TO_BE_REPLACED