Highly endangered primates in Vietnam get helping hand from CU 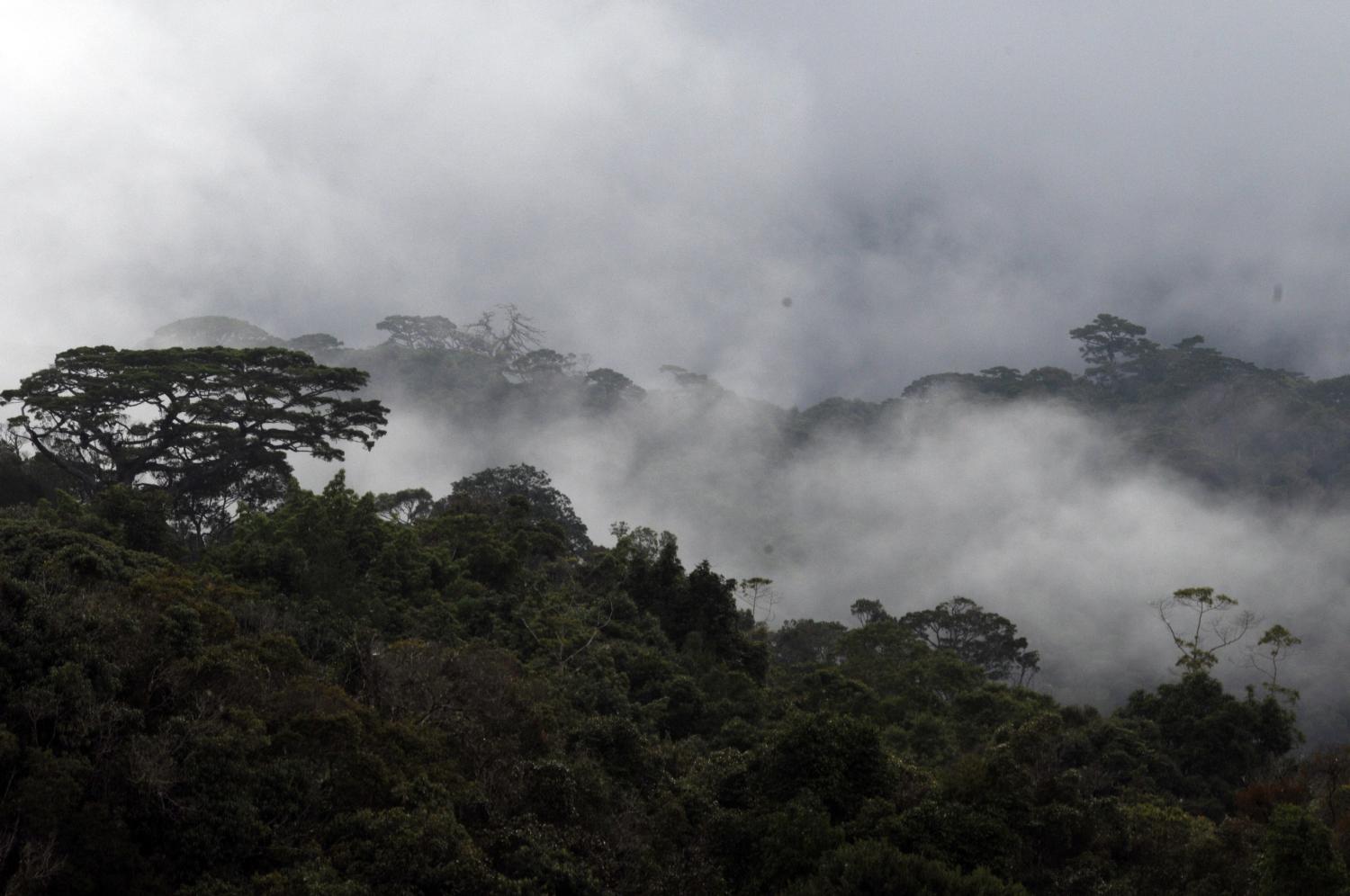 Fog envelops the Bidoup Nui Ba National Park Vietnam, above, where CU-Boulder Professor Herbert Covert has been working to train and collaborate with Vietnamese scientists to survey and strive to protect some of the most endangered primates on Earth. Photo by Herbert Covert.

Their goal is to count the tree-dwelling gibbons in this protected forest, then ultimately to establish and implement a conservation plan. Gibbons are among the world’s most endangered primates.

Covert is professor and chair of the Department of Anthropology at the University of Colorado Boulder. His work in Vietnam, funded by the U.S. Fish and Wildlife Service and other agencies, has a more “profound” effect than other work he could do, he says.

Gibbons live in mated pairs. Nearly every morning, they make loud calls in a chorus. “They duet together. It’s beautiful, and you can hear them for more than a mile.”

Gibbons’ morning duets announce to nearby gibbons, “This is our territory,” and, “Stay back.”

The best way to estimate an area’s gibbon population is to set up listening posts at two-kilometer intervals. From these posts, scientists can triangulate the location of the gibbons and enter the data into programs that generate statistically sound estimates of population densities and population size.

Covert and his Vietnamese colleagues sat from 5 to 8 each morning for three consecutive days last year waiting for the animals to sing. Over time, the Vietnamese scientists, under the direction of Dr. Hoang Minh Duc, vice director of the Southern Institute of Ecology (SIE) in Ho Chi Minh City, intend to set up 72 listening posts.

For years, Covert has been helping to train Vietnamese scientists in conservation techniques. The listening-post survey vivified the lessons the scientists had learned in classrooms. In the classroom, students might say, “Oh, that’s interesting, and I understand that.”

But in the field, their experience was more visceral, Covert says. Rather than just studying sheets of data, the scientists excitedly described hearing gibbons from different vantage points.

Covert says it is gratifying to watch the transformation from “people looking at data sheets to people really being energized by the experience.”

Vietnam is home to five of the 25 most endangered primates. The country, about the size of Colorado, is also home to 90 million people. Biodiversity is particularly at risk there, Covert says. 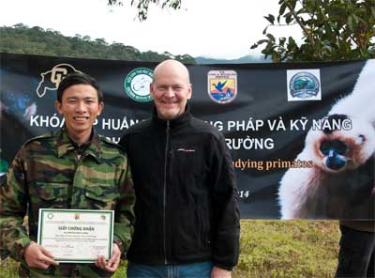 “It’s now or never for Vietnam in terms of conservation,” Covert says. Because Vietnam has the political will to support conservation and beginning to get economic means to do so, he is eager to lend a hand.

It might not be obvious how an anthropologist specializing in early primate evolution became a key collaborator in modern primate conservation. Covert tells the story this way:

Up until the late 1990s, Covert was researching early primate evolution, conducting field research in Wyoming, Utah and North Africa.

In the mid-1990s, discoveries in China hinted at a radiation of animals that were related to the animals of North America, potentially ancestral to African animals. That shifted the focus of some research on origin of primates from Africa and North America into parts of Asia.

Vietnam had recently opened its scientific community to international collaboration, and Covert asked a Vietnamese scientist about the possibility of working together.  Within weeks, he got a keenly interested reply.

Covert first collaborated with scientist Trinh Dzanh. Together, they toured Vietnam, and Dzanh visited the United States. “He was really taken by the classrooms in the University of Colorado Boulder, where students asked questions and where there were teaching labs in which students handled material,” Covert recalled.

CU-Boulder was a world away from Vietnamese universities, which lacked resources and employed a different teaching method. The traditional teaching style in Vietnam is from professor to student, with the expectation that the student’s role is to memorize the material.

“There’s no exchange of information” between professor and student, Covert said.

In 2001-02, Covert received a Fulbright Fellowship to work with Dzanh. During that year, Dzanh asked Covert to give lectures to universities, government agencies and other groups.

In the audience that day were two of Vietnam’s leading experts on primate conservation. After the talk, which was delivered through an interpreter, one of the leading experts rose to speak.

"Conservation and biodiversity in the eyes of young, Vietnamese scientists was a part of providing safe environments not only for animals but for people.”

“He spoke very forcefully, and he was clapping his hands and going on and on,” Covert recalled. He knew the scientist was citing different dates, “but I was nervous that he was saying that my lecture was a bunch of bunk.”

As it happened, the interpreter explained to Covert, the Vietnamese professor was reminding the audience that the Vietnamese government had recently passed strong conservation laws that were not being enforced, and that things Covert had said about the challenges of conservation “not only were they true, but that things were actually worse.”

One student in the audience, Nguyen Manh Hiep, was the son of the director of Vietnam’s oldest national park. Hiep had spent a lot of time in the park, enjoyed biodiversity, and was excited that a U.S. scholar would be interested in these topics. The conversation that began with Hiep that night continues to this day

“That lecture really changed my intellectual life, and my personal life in some respects, in that my extended family now includes a number of young Vietnamese scientists’ families.” 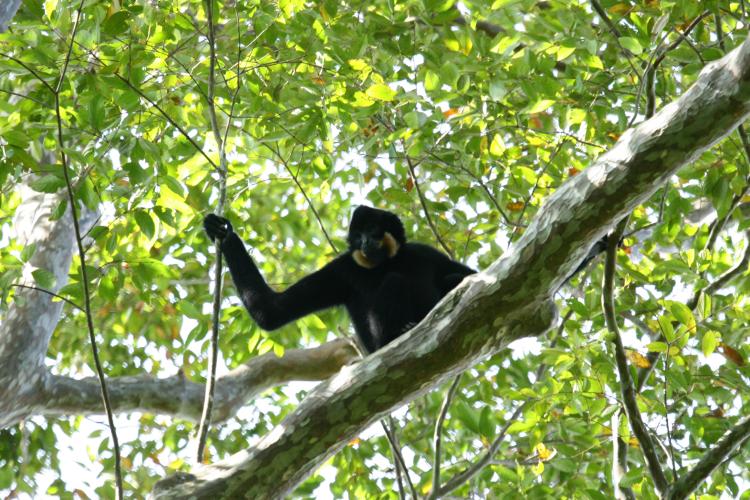 A yellow-cheeked crested gibbon perches in a tree in a Vietnam forest. Photo by Tran Van Bang.

Covert observed that Vietnam was interested in trying to preserve its biodiversity and less interested in paleontology. Those were good reasons to shift his research focus.

“As an anthropologist, when I travel to other places, I am a firm believer that I am a guest of that country and that if they’re interested in my working with them and helping them, I’m happy to do so. But I don’t feel comfortable dictating to other people what should be done and why.”

Vietnam was interested in conservation not only for biodiversity but also for watershed management. The country is growing rapidly, and a middle class is emerging. And with broader rights to speech, Vietnamese citizens were debating food security, food quality, water safety and air pollution.

“Conservation and biodiversity in the eyes of young, Vietnamese scientists was a part of providing safe environments not only for animals but for people.”

Hoang Minh Duc of Vietnam’s Southern Institute of Ecology introduced Covert to another scientist who later won a three-year MacArthur Fellowship. Covert was invited in 2006 to help train 15 young scientists in conservation techniques.

“In Vietnam at that time, the tradition was you often appointed people to be in charge of these things as rewards for being a good patriot, not because they were particularly interested in nature conservation,” Covert said.

Under the training program Covert helped to implement, trainees would get together one week a month for 24 months and undergo a series of trainings, re-trainings and evaluations. “And the last year, they would develop a program that they would implement at a protected area.”

The MacArthur course, by contrast, funded extensive training and travel for the young scientists, and it granted them access to computers, GPS units, binoculars and cameras, “things that we would just take as a given but aren’t accessible” to them.

Covert was awarded another Fulbright in 2008-09 to work with SIE. One of their joint activities was another week-long training to the scientists in the MacArthur program he had worked with during their second training course.

Covert and the young scientists reviewed material they’d previously discussed and explored emerging technologies. Also that year, they graduated from the training course. Each of the trainers gave a 15-minute presentation on what the training had meant to them.

“In many respects, it would be like getting a master’s degree in protected-area management. These people had skills now that were better than people in most protected areas in Southeast Asia. Plus, they were a network of 15 (scientists), and they could always reach out and talk to one another.”

“It’s something that I consider to be outreach that I’m really proud of. I’m confident that I’m making a difference for the environment and for conservation in a way that’s much more profound than when I publish a peer-reviewed article which is read by some people,” he said, adding, “This is not demeaning peer-reviewed articles, of course.”

The current project in Vietnam, funded by the Great Ape Conservation Fund of the U.S. Fish and Wildlife Service, will conclude in 2015.

The Old Main Cottonwood is indeed getting new life. In October, cuttings were taken from the canopy of the tree by Facilities Management arborists Aquino and Joel Serafin. END_OF_DOCUMENT_TOKEN_TO_BE_REPLACED

Professors in theatre, biology and environmental studies team up to focus on creatively communicating climate science through the arts and social sciences. END_OF_DOCUMENT_TOKEN_TO_BE_REPLACED