As the rubble of the World Trade Center in New York was still smoldering, President George W. Bush told the nation that the terrorists came from a small group of religious extremists who “hate our freedoms.” That extremism, he said, “perverts the peaceful teachings of Islam.”

Religious tension is as old as religion itself. But that attack and the West’s response hardened opinions toward the world’s 1.2 billion Muslims. Scholars at the University of Colorado have augmented a growing body of research showing a deep misunderstanding and misplaced fear of Islam. Their aim: to shine light into the dark chasm of prejudice.

The fear of Muslims, they say, stems in part from the incorrect belief that an important Islamic tenet of community—or “ummah”—encourages Muslim allegiance to their religious traditions instead of their countries, and that this “transnational Islam” is a threat.

Those are key findings of an interdisciplinary team of scholars from anthropology, religious studies, history and journalism, which has completed a pilot study on “Transnational Discourses of the Global Islamic Community.” 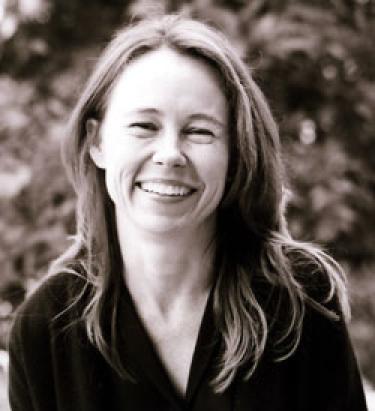 Carla Jones, an assistant professor of anthropology and a leader of the project, notes that Western depictions of Islam are frequently “incredibly parochial and antithetical to modernity.” She says serious scholars of Islam find such depictions “very misleading and offensive.”

Islam is the world’s second-largest and fastest-growing religion. Modern Muslims don’t fit a stereotype; while they identify themselves partly by nationality, they are attracted to a global community of similarly pious people. Catholics do too, she adds. More importantly, neither group’s opinions are homogeneous.

The team led by Jones and Ruth Mas, assistant professor of religious studies, went outside the Middle East to interview Muslims about their views on global Islam. The findings, which Jones hopes will help secure major funding, were presented in a campus conference last fall.

The scholars found that Muslim conceptions of ummah vary widely.

In Pakistan, for instance, CU geography Instructor Najeeb Jan interviewed more than 20 people. He asked each one about the meaning of ummah.

A teacher responded this way: “I don’t think the ummah is an idea behind which a series of complicated words and formulae can stand. The ummah is a doing; it is rooted in a practice.”

A wealthy businessman in Karachi said this: “Ummah to me means the community of Muslims everywhere. It should mean peace and security for everyone, not just Muslims. In reality, it’s all hypocrisy.”

A Karachi banker was more blunt: “The ummah? Are you kidding me? Is that a real question? What (expletive) ummah?”

In short, there was no majority view, let alone a universal one. “For the most part, their involvement with community (or ummah) was highly local, bound up more with either class, ethnic or sectarian affiliation rather than Muslim generality,” Jan reported.

That finding was echoed by Dennis McGilvray, professor and chair of CU’s anthropology department and another member of the team. He has studied the Sri Lankan Tamils and Muslims for three decades. McGilvray focuses on a volatile area on the eastern side of the island, where the population consists, in roughly equal parts, of Tamil Hindus, Sunni Muslims and Sinhalese Buddhists.

As McGilvray notes, Sri Lankan Muslims face difficult challenges: the threat of ethno-nationalist violence from Tamils and Sinhalese and the tension between “pan-Islamist reform orthodoxy vs. localized Sufi mysticism and traditional forms of devotional piety.”

As some Sri Lankan Muslims become more prosperous, more make the “Hajj” an annual pilgrimage to Mecca. Prosperity also gives more Muslims access to the internet and satellite TV, thereby exposing them to worldwide discourse on “Muslim issues” and building the global community, the ummah. 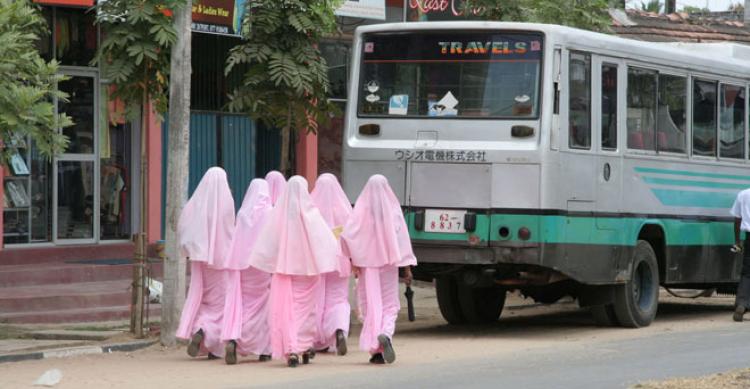 But Sri Lankan Muslims are caught between ethnic and nationalistic pressures from Tamil and Sinhalese citizens, and they “must be cautious not to project any threatening image of ethno-nationalism or Islamist extremism,” McGilvray concludes.

Jones notes that Muslims are sometimes wrongly conflated with Arabs, even though Muslims live worldwide, represent many ethnicities—and even though the world’s largest Muslim nation, Indonesia, is not Arab.

Jones does her research there. Indonesian Muslims tell Jones that the worldwide ummah is nothing new. “They say, ‘We have always been global,’” she observes.

Many Indonesian Muslims embrace a more religious life. But, Jones says, this is not a zero-sum game; the rise of Islam does not presage the fall of nationalism. Indonesian Muslims, like those in other countries, retain a strong national identity.

Some Indonesian Muslims may take a pro-Mideast stance because it feels anti-Western or anti-colonial. At the same time, she notes, Arab Muslims have long claimed to be the paramount authorities on Islam, partly because Islam’s holiest sites, Mecca and Medina, are in Saudi Arabia.

For such reasons, Indonesian, Malaysian and other Muslims may be thus seen as “second-class citizens” by Arab Muslims.

Jones notes that religious piety need not be viewed as antithetical to patriotism. “We have generations of Americans who were raised Buddhist or Jewish,” and who view themselves as thoroughly American.

Buddhism, Judaism and Christianity are all, she notes, transnational: Adherents of these faiths feel bonded to their spiritual kin in other nations. But that does not make them monolithic or threatening to any nation, she says.

Jones mentions a community of Muslims living in Detroit that was studied by conference participant Andrew Shryock of the University of Michigan. The community is viewed from the outside as a group of Arab Muslims. But the people within that community come from different parts of the world and have different interpretations of their religious traditions.

Shryock suggests that the anti-Islamic sentiment in the United States pressures these groups to maintain a positive and unified public reputation of Islam, even when there are tensions among the groups.

“Forms of Islam that are transnational are not necessarily threatening or violent,” Jones emphasizes. She mentions Catholicism and the pope, which are more transnational and centralized than Islam is.

Mas, who was born in Spain and studies Muslims in Europe, concurs. In the West, she says, the common assumption is that because the ummah is a “unified term,” it is “set against westerners.” 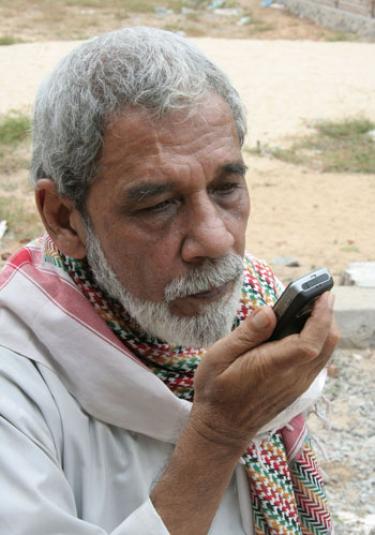 The ummah doesn’t necessarily eschew the West. They define themselves as Muslims who belong to the West but are not threatening, she says. In France, she says, Muslim intellectuals are attempting to formulate notions of the ummah as community, so everyone (Muslim and non-Muslim) is part of ummah.

Often, she says, a Middle Eastern response to the French-Muslim view of ummah is, “Are you kidding?”

Meanwhile, Mas adds, some North African Muslims, who are viewed with suspicion by some Middle Eastern Muslims, propound religious reforms considered by Egyptians, Saudis, Iraqis and others to be French and secular.

“But most of these thinkers are at the forefront of a Western dialogue about Islam. They’re fascinating,” Mas says. “They argue that because of Islam’s history in al-Andalus (on the Iberian Peninsula), Islam is centered in Europe.”

Meanwhile, much of the West is oblivious to these nuanced intra-faith discussions. As Jones notes, transnational Islam has long been seen as bad. “That was cemented after 9-11.”

In the wake of that attack, “it was assumed that people were choosing religious identity over other identities, that they were anti-national and anti-modern,” Jones says.

Transnational Islam, Mas adds, “is not a force that is able to exceed national boundaries and break them down.” Those who speak of Islam or Islamic community have no choice but to do so in the context of a nation, she says. “They are Muslims, but they are also Egyptians.”

“To say they hate the West is hilarious,” Mas says. “They have already become westernized.” And most people in Muslim countries are secular, she adds.

Mas notes that Jews, Christians and Muslims all claim in different ways to be God’s chosen people. To assert that your people are the chosen ones could simply reveal religious confidence. And “what’s wrong with that?”

Mas answers, “The question really is how to hold all these competing claims within a national boundary and context which puts itself forward as secular, especially when that secularism has already been shaped along Christian lines.”

In their own words: Politicians and pundits frame Western views of Islam

“The terrorists practice a fringe form of Islamic extremism that has been rejected by Muslim scholars and the vast majority of Muslim clerics; a fringe movement that perverts the peaceful teachings of Islam. …

“I also want to speak tonight directly to Muslims throughout the world. We respect your faith. It’s practiced freely by many millions of Americans and by millions more in countries that America counts as friends. Its teachings are good and peaceful, and those who commit evil in the name of Allah blaspheme the name of Allah. …

“Americans are asking, ‘Why do they hate us?’

“They hate what they see right here in this chamber: a democratically elected government. Their leaders are self-appointed. They hate our freedoms: our freedom of religion, our freedom of speech, our freedom to vote and assemble and disagree with each other.”

“We should invade their countries, kill their leaders and convert them to Christianity. We weren’t punctilious about locating and punishing only Hitler and his top officers. We carpet-bombed German cities; we killed civilians. That’s war. And this is war.”

“We are a nation of Christians and Muslims, Jews and Hindus, and nonbelievers. We are shaped by every language and culture, drawn from every end of this Earth.

“And because we have tasted the bitter swill of civil war and segregation and emerged from that dark chapter stronger and more united, we cannot help but believe that the old hatreds shall someday pass; that the lines of tribe shall soon dissolve; that as the world grows smaller, our common humanity shall reveal itself; and that America must play its role in ushering in a new era of peace.

“To the Muslim world, we seek a new way forward, based on mutual interest and mutual respect.”

“’People who committed this heinous crime cannot be called Muslim,’ Hanif Nalkhande, a spokesman for the (Muslim Jama Masjid) trust, told The Times of London. Eventually, one assumes, they will have to be buried, but the Mumbai Muslims remain defiant.

“‘Indian Muslims are proud of being both Indian and Muslim, and the Mumbai terrorism was a war against both India and Islam,’ explained M.J. Akbar, the Indian-Muslim editor of Covert, an Indian investigative journal. ‘Terrorism has no place in Islamic doctrine. The Koranic term for the killing of innocents is ‘fasad.’ Terrorists are fasadis, not jihadis. In a beautiful verse, the Koran says that the killing of an innocent is akin to slaying the whole community. Since the … terrorists were neither Indian nor true Muslims, they had no right to an Islamic burial in an Indian Muslim cemetery.’”

The Old Main Cottonwood is indeed getting new life. In October, cuttings were taken from the canopy of the tree by Facilities Management arborists Aquino and Joel Serafin. END_OF_DOCUMENT_TOKEN_TO_BE_REPLACED

Professors in theatre, biology and environmental studies team up to focus on creatively communicating climate science through the arts and social sciences. END_OF_DOCUMENT_TOKEN_TO_BE_REPLACED