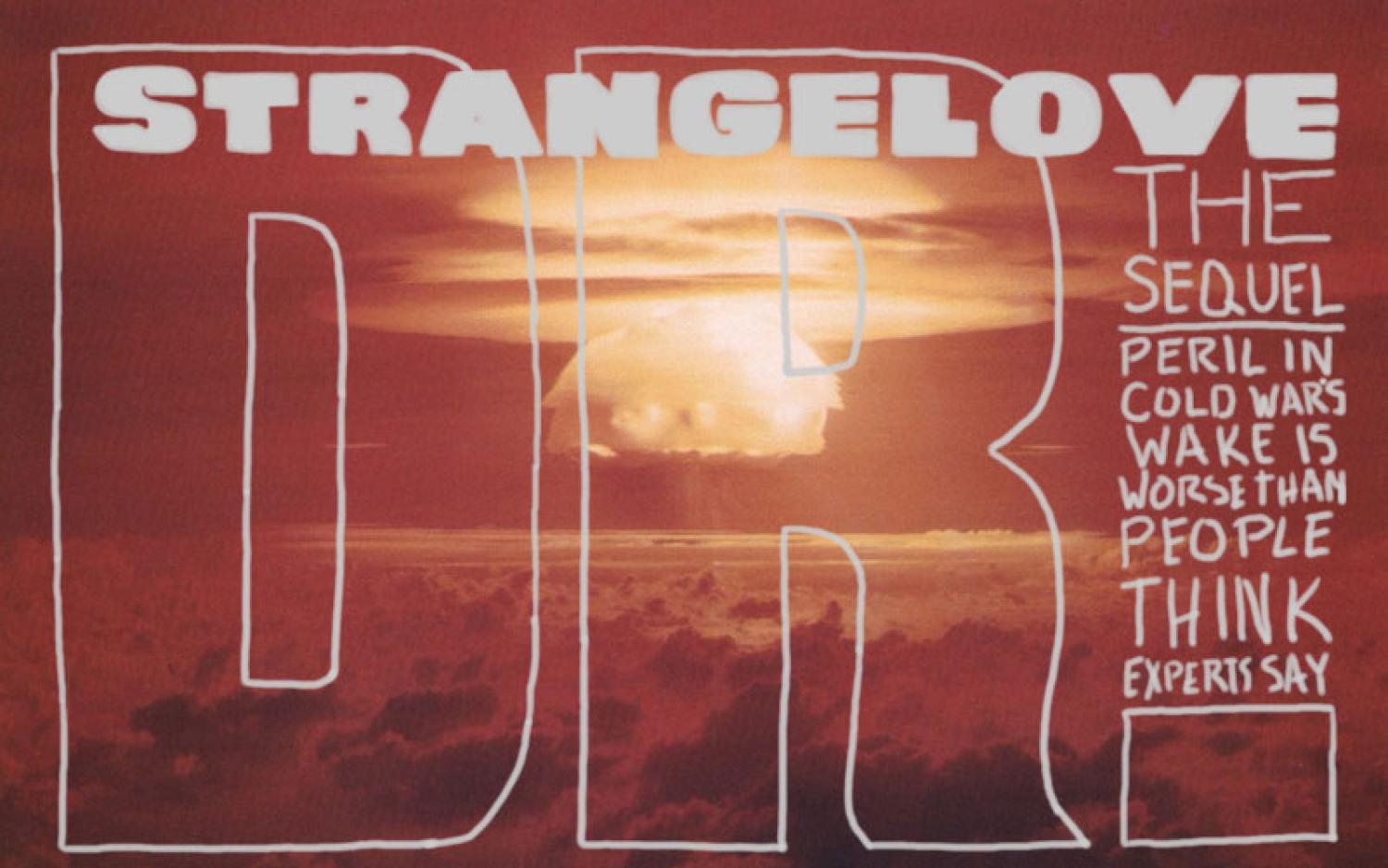 The Cold War is history, and major nuclear powers are slashing their arsenals. No rational leader would start a nuclear war. And even if India and Pakistan traded a few nuclear bombs, conventional wisdom suggests, most of the world wouldn’t suffer much. The nuclear threat is diminishing, right?

Toon is a renowned atmospheric physicist at the University of Colorado whose study of the probable effects of nuclear war has made headlines for decades. Toon’s view of the danger of “limited” nuclear combat is neatly summed up in the title of a talk he gave to the American Geophysical Union last year:

“Another Inconvenient Truth: Even a Small Nuclear War Could be Much Worse Than You Think.” A corollary truth, Toon notes, is that such a war is more likely than many believe. To some, the threat of nuclear war may seem remote and abstract, but Toon grew up when nukes always loomed large.

As a school boy, Toon learned to “duck and cover” (under a desk, in a doorway, next to a brick wall) in case of a nuclear attack. Through much of his life, the threat of nuclear war remained a ghoulish specter, generating scientific research and inspiring the world’s superpowers to stop their arms race.

Toon has become a top authority on the effects of nuclear war. The term “nuclear winter,” in fact, stems from a landmark paper published in Science in 1983 and written by R.P. Turco, Toon, T.P. Ackerman, J.B. Pollack and the late Carl Sagan.

(“Nuclear winter” denotes a worldwide drop in temperatures due to the dust and soot from firestorms that would block sunlight after nuclear war.)

The 1983 nuclear-winter study assumed a war involving 5,000 megatons of explosions—about 2,500 times the explosive power of all the bombs detonated in World War II. 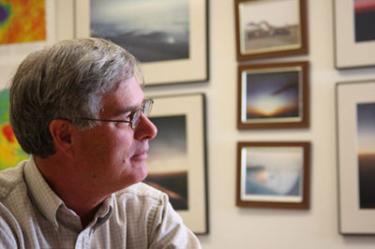 Professor Brian Toon, a renowned atmospheric physicist, has been one of the world's leading experts on "nuclear winter" for a quarter-century. In recent years, his research has focused on the effects of "limited nuclear war," involving a tiny fraction of the world's nuclear arsenal. He and his colleagues say the effects of such a war would be global and profound. Further, he says the press and politicians are not paying enough attention to this danger, which is growing as more nations, some of them unstable, become nuclear states.

In recent years, Toon, professor and chair of the University of Colorado Atmospheric and Oceanic Sciences Department, has led or joined several studies showing that even a “limited nuclear war”—involving an iota of the firepower studied previously—would devastate the stratospheric ozone layer and plunge the world into devastating frigidity. Global average temperatures would be colder than any seen in the last thousand years.

In 2006, Toon helped lead two studies that found that even a small-scale nuclear war—one involving 100 15-kiloton explosions—could slaughter as many people as were killed during World War II and disrupt the world’s climate (and food production) for a decade. Toon noted that nations such as Pakistan and India have the capacity to detonate 50 Hiroshima-sized nuclear bombs.

In 2007, Toon, Rich Turco of UCLA, Alan Robock of Rutgers University and others published a paper in Science emphasizing the devastation that could follow a “limited,” or regional, nuclear war. Such a war would involve a trivial portion of the world’s nuclear arsenal: less than one-tenth of 1 percent of the world’s nukes.

But in addition to killing millions of people outright (the extent of immediate carnage would depend, for instance, on how many “megacities” were targets), such a war would also cause massive fires that could propel 1 million to 5 million tons of soot into the high atmosphere.

That would disrupt agriculture and other systems, and Toon and his colleagues concluded that indirect casualties could exceed direct casualties. “The consequences of regional-scale nuclear conflicts are unexpectedly large, with the potential to become global catastrophes.”

Much of the death would come from starvation due to shorter growing seasons. At any moment, Earth’s 6.7 billion people depend on a food supply that, if not replenished, would disappear in about 45 days.

If you don’t constantly produce and transport food, the result is starvation, Toon observes. “You just can’t shut down agriculture for a decade, or even for a year.”

Last year, Toon and fellow CU scientist Michael Mills published the results of a study that found that a “limited” nuclear war involving 100 Hiroshima-sized bombs would also create a near-global ozone hole, further harming plant and human life. The ozone layer shields the Earth from dangerous ultraviolet radiation. The study by Toon and Mills was published in the Proceedings of the National Academy of Sciences.

In the December 2008 edition of Physics Today, Toon, Robock and Turco again discussed regional and worldwide nuclear war. Under the Strategic Offensive Reductions Treaty of 2002, the United States and Russia agreed to limit their operationally deployed warheads to no more than 2,200 by the end of 2012.

If the United States and Russia met that target and destroyed other warheads, they would retain only about 6 percent of the 70,000 warheads they had in 1986. “Given such a large reduction, one might assume a concomitant large reduction in the number of potential fatalities from a nuclear war and the likelihood of environmental consequences that threaten the bulk of humanity,” Toon’s latest article states.

“Unfortunately, that assumption is incorrect.”

Yet the assumption persists. As Toon notes, some wrongly believe that the nuclear-winter idea has been “discredited.” In 1987, for instance, the National Review called nuclear winter a “fraud.” In 2000, Discover magazine included nuclear winter in a list called “20 of the Greatest Blunders in Science in the Last 20 Years.” The late Michael Crichton, a science-fiction author and medical doctor, sought to discredit research on nuclear winter (as well as climate change).

Studies by the National Research Council and the World Meteorological Organization have confirmed the nuclear-winter hypothesis, however.

One erroneous conclusion, he says, is in a 2006 article in the journal International Security, titled “The End of MAD?” (MAD, or Mutually Assured Destruction, is the premise that launching a nuclear war would be suicidal. That balance of terror was presumed to have prevented nuclear war.)

In the 2006 International Security article, Keir A. Lieber and Daryl G. Press argue that the United States “stands on the verge of attaining nuclear primacy,” meaning that it could disarm long-range missiles in China or Russia with a pre-emptive first strike. A surprise attack by the United States, they say, would have “a reasonable chance of success.”

That depends, of course, on how one defines “success.” Toon says such an attack would threaten the entire population of the world.

In his office recently, Toon mused about the waning public concern about nuclear war. The political climate today differs from that of the 1980s, when U.S. President Reagan and Soviet leader Mikhail Gorbachev agreed to slash their nuclear arsenals. Their efforts followed studies by the National Research Council and others that confirmed the unprecedented destruction of nuclear war.

The continuing nuclear disarmament did not occur spontaneously, Toon notes. Scientific research “led to this build-down.”

Scientific interest in the effects of nuclear war waned after the end of the Cold War. That made some sense, Toon notes, given the Strategic Offensive Reductions Treaty and nuclear-test-ban treaties.

reproduction of two pages of a civil-defense brochure from the 1950s. This exemplifies the "duck and cover" advice the government offered citizens as a means to survive a nuclear attack.

But the end of the Cold War did not eradicate all danger. The superpowers slowed and then reversed the arms race. But today, even as Russia and the United States forswear much of their arsenals, developing nations are assiduously arming themselves. About one nation every five years develops a nuclear weapon.

That’s one of many “ominous signals” for the coming decades, Toon observes. India, for instance, is believed to have 100 nukes and the long-range missiles to deliver them worldwide. Pakistan has perhaps 50 weapons and short-range missiles.

In a few decades, a half-dozen countries could wield the same destructive power as do the United States or Russia, Toon says. “This is a very dangerous path for us to go down.”

China, India and North Korea already have nuclear weapons. South Korea and Japan have fissionable material. Such developments are disturbing. “Right now, the world is not cooperating in any meaningful way to solve these problems.”

At the same time, some influential leaders have been arguing publicly that the world is on the “precipice of a new and dangerous nuclear era.” In guest-opinion pieces in The Wall Street Journal, former Secretaries of State George Shultz and Henry Kissinger, former Secretary of Defense William Perry, and former chairman of the Senate Armed Services Committee Sam Nunn underscored this point.

“Unless new urgent actions are taken, the United States soon will be compelled to enter a new nuclear era that will be more precarious, psychologically disorienting, and economically even more costly than Cold War deterrence,” they wrote in 2007.

Toon says it’s “mystifying that the American press paid no attention to these important, influential people” who are “telling us that our policy is wrong.”

With respect to public awareness, Toon contends that the press has “abrogated its responsibility” to convey the danger the world now faces. In terms of firepower, he adds, “I don’t think the press realizes that India is like Russia once was. That’s not an extremist view. That’s where they’re headed.”

He recognizes that Americans tend not to perceive India as a potential threat. “It’s not in the western view of India—Mahatma Gandhi and a bunch of skinny kids running around starving to death. In fact India is a technologically advanced country, with a large middle class, that wants to play a role on the global stage in proportion to its massive population.”

After the recent terrorist attacks in India, he notes, many Indians wanted to nuke Pakistan. Such countries don’t necessarily have good structural controls over their armies and their nukes.

“In my mind ‘Dr. Strangelove’ is not out of the realm of possibility, particularly in countries like Pakistan, or North Korea” Toon says, referring to the sardonic Cold War movie in which a rogue U.S. general launches a pre-emptive nuclear attack on Russia.

Toon advocates greater public awareness and more scientific research. He recommends that the National Academy of Sciences and scientists in other countries study, challenge and replicate his results. “These results need to be repeated. They need to be debated.”

When many scientists show the existence of a real and present danger, politicians tend to act. Such research drove arms negotiations in the ‘80s and ‘90s, and Toon says that pattern should recur.

The fear and danger of the Cold War should truly become history, Toon says. “It is not something you want to have your kids go through.”

The Old Main Cottonwood is indeed getting new life. In October, cuttings were taken from the canopy of the tree by Facilities Management arborists Aquino and Joel Serafin. END_OF_DOCUMENT_TOKEN_TO_BE_REPLACED

Professors in theatre, biology and environmental studies team up to focus on creatively communicating climate science through the arts and social sciences. END_OF_DOCUMENT_TOKEN_TO_BE_REPLACED