As he seeks the elusive word, his eyes dart up, down, to the side. Books, journals and mounds of paper are heaped around his campus office, on his desk, atop tables, sometimes on the floor. Momentarily adrift in a sea of words, he can’t find the right one. His jaw tightens, then eases. He smiles.

“This is an example of aphasia,” he says. A short pause later, he seizes the word and exclaims: “Parkinson’s!”

Snow does group speech therapy with people with Parkinson’s Disease. Like them, he can struggle to communicate. But Snow does not share their affliction. He suffered a serious stroke nearly three years ago but has gotten steadily and significantly better.

Snow, a professor of astrophysical and planetary sciences at the University of Colorado, still has occasional difficulty conversing. But he can speak and teach — and give scientific presentations abroad — and that is inspiring, remarkable and even instructive.

Several factors seem to have facilitated Snow’s recovery. He has a devoted wife, helpful colleagues, stiff resolve and, not least, cutting-edge therapy from CU’s Department of Speech, Language and Hearing Science. Snow has been on the CU faculty for more than three decades, but he was unaware of this department and its services until his wife, Connie, found them.

The discovery was a blessing.

The stroke hit in November 2005. He took six months of sick leave and rapidly finished all the rehabilitative therapy his insurance would cover.

Like many victims of brain injury or stroke, Snow had aphasia, the reduced ability to produce or comprehend language. He also had apraxia of speech, a condition that renders the person unable to say, consistently and correctly, what he means to say.

Within a few months of the stroke, a speech therapist not affiliated with CU told Snow that he’d probably never again teach, let alone give scientific presentations. “At first, I thought I’d have to retire,” he recalls.

Snow came to CU in 1977 from Princeton, where he worked with Lyman Spitzer, inventor of the Copernicus UV orbiting telescope and, later, the Hubble Space Telescope. 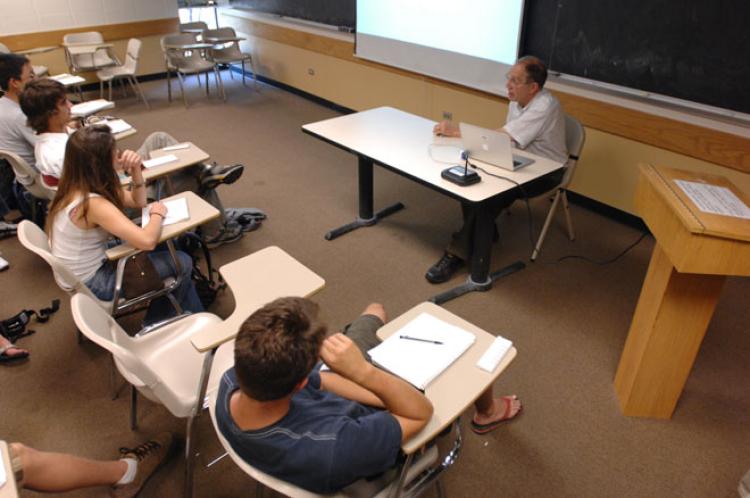 Professor Ted Snow lectures during a physics class this fall. After a stroke threatened to end his career, help came from CU’s Department of Speech, Language and Hearing Science. (Photo: Casey Cass)

He notes that he did his undergraduate work at Yale University as a member of the class of ’69. At Yale, Snow came just after George W. Bush, the future president, and just before Garry Trudeau, whose “Doonesbury” comic strip has parodied every president from Nixon to now.

Now, he serves on the science team for the new Cosmic Origins Spectrograph that is to be installed on Hubble.

Regaining such productivity came slowly. In his office recently, Snow ticked off the disheartening obstacles to recovery.

At first, moving required a wheelchair. Later, he leaned on a cane, relearning the skill of walking by making innumerable “laps” around his garage with Connie’s help.

Using his right hand also posed problems. His brain would direct his right arm to move, but the arm was not of a mind to obey. Even now, Snow types only with his left hand.

Language was a particular challenge, especially for a teacher. In the beginning, Snow sometimes fought to remember simple, important words, like the names of his wife and kids. When he did pick a word, his choice was often wrong.

But neither he nor Connie was inclined to accept a bad prognosis — or the end of insurance-covered rehab — as the last word. She scoured the university for more assistance. She found Speech, Language and Hearing Science, which trains outstanding clinicians and performs leading-edge research.

Supervised graduate students offer a host of speech (and hearing) therapy for individuals and groups, adults and children.

Snow describes pronunciation drills his therapist guides him through. Those drills focus on words he finds difficult. Like “desk.”

As Snow describes this, he pronounces “desk” a bit indistinctly. Immediately, he repeats it: “desk,” he declares, this time ardently emphasizing the “k.”

Another tough word is “statistics,” which Snow says crisply on his second try: “sta-tis-tics.” That word was harder to pronounce after the stroke. Now, he notes dryly, it is “one of my favorites.”

In addition to his more recent work, which focuses on speech-production challenges posed by apraxia, Snow’s earlier therapy also focused on language deficits in speech, writing, reading and listening that were caused by aphasia. Snow’s therapy also integrated work-related activities that were highly dependent upon speech and language.

Notwithstanding the speech and language problems, Snow continues to write peer-reviewed journal articles.

Snow is also continuing to write a book for the lay audience about the element carbon. Snow describes it as a comprehensive look at carbon, including its discovery, its role in the formation of most of the other elements in the universe and in biochemistry, and its role in climate change. He’d just signed a contract with Princeton University Press when he had the stroke.

Meanwhile, he’s collaborating on a textbook with Alan Stern, who until March was NASA’s associate administrator for the Science Mission Directorate. (Stern is a leading planetary scientist, is the principal investigator on the New Horizons mission to Pluto and was listed by Time magazine last year as one of the 100 Most Influential People in the World.)

While he is grateful for his recovery, Snow acknowledges limitations. He no longer does “off the cuff” course lectures. To help ensure that he says what he means to say, he carefully rehearses his script. A veteran faculty member, he now uses teaching tools like PowerPoint slides and “clicker” technology (whose instantaneous feedback allows the presenter to know whether the class has understood key concepts) to communicate with students.

“Clickers” are handheld devices about the size of a TV remote that signal receivers linked to computers controlled by instructors. In class, instructors can ask multiple-choice questions to which they will get immediate responses. If half of the class chooses answer “A” when the correct answer is “C,” the instructor can devote more time to the question. If most students understand the material, the instructor can move on.

Notably, Snow has given two invited talks on interstellar organic matter. One was in California, the other in Hong Kong. Snow plans a third presentation in Germany in September. 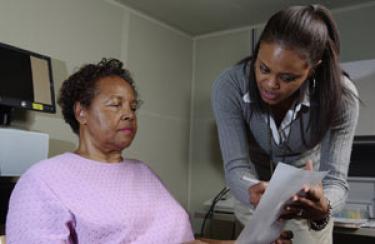 “His outcome is remarkable,” observes Gail Ramsberger, chair of the Department of Speech, Language and Hearing Science.

Ramsberger notes that, like Snow, many people are unable to get sufficient treatment unless they can self-pay, or unless they close to a graduate training program such as CU’s. “When you have someone like Ted, you’re done with insurance long before you begin to help people.”

When someone has a stroke, a part of the brain dies. However, the surviving portions can reorganize if given appropriate stimulation. Therapy provides the stimulation that helps clients do once-familiar tasks in different ways.

It is now possible with brain-imaging techniques to see how the brain operates differently following speech-language therapy. Therapy may also help people to learn to compensate for lost abilities.

Those who can’t read can use a text reader. Those who can’t find the right word can practice circumlocution, scanning their memories for synonyms. Speech and language pathologists encourage clients to monitor themselves, to make word choice less automatic and more controlled.

For many clients, such “mental gymnastics” make communication more difficult than it appears. Fatigue is common. If the trauma has affected the brain’s left hemisphere, people can also suffer depression, which worsens cognitive functioning and hinders recovery.

Snow did not seem to suffer depression and had many advantages, Ramsberger notes. One is that he got more treatment than many do. Another is that, before he could move around campus, clinicians went to his office to see how they could help him return to work. A third is group therapy, which fosters rehabilitative interactions with other clients.

Additionally, Snow had supportive colleagues and a spouse who offered the right balance of help and encouragement.

Finally, Ramsberger suggests, Snow had the fortitude to keep striving for recovery, even at the risk of embarrassment. “To get up in front of a group of students — when you know you might use the wrong word — takes a lot of guts.”
Behind the therapy

As Ramsberger notes, however, clinical applications do not exist in a vacuum. They stem from careful research.

For a century and a half, she notes, the treatment of aphasia has focused on language processing, trying to help people regain the linguistic skills they have lost. Now, that emphasis is shifting, as researchers see the effectiveness in exploiting non-language cognitive skills that underlie communication.

In her research, Ramsberger explores such non-linguistic cognitive skills, which she calls a potentially promising approach to treating aphasia.

Meanwhile, her colleagues expand the boundaries of knowledge in the fields of hearing, speech and language.

This year, Ramsberger notes, there were 329 applicants for 29 openings for graduate students. The department’s students are 100-percent employed upon graduation. Given the rising numbers of children with autism and other developmental communication disorders, and given the aging U.S. population, demand for speech, language and hearing therapy will only intensify.

Snow, who has worked with several student therapists, says the program attracts good students, who will no doubt go on to become good clinicians or researchers.

Despite its rising popularity, Speech, Language and Hearing Science rarely makes headlines. As Snow observes, “I never would have known about it if I hadn’t needed it.”

But he did need it. Connie did find it. And he did seize the day. He faces new obstacles. But he enjoys ever more success in the sometimes-arduous quest to find the right word. Like “recovery.”

The Old Main Cottonwood is indeed getting new life. In October, cuttings were taken from the canopy of the tree by Facilities Management arborists Aquino and Joel Serafin. END_OF_DOCUMENT_TOKEN_TO_BE_REPLACED

Professors in theatre, biology and environmental studies team up to focus on creatively communicating climate science through the arts and social sciences. END_OF_DOCUMENT_TOKEN_TO_BE_REPLACED