Glory in arts and sciences

Still on the frontier, more than a century later

When Mary Rippon stepped off the train in the desolate, dusty Boulder of 1878, the university’s first president posed an apprehensive question to its second faculty member: “How does it look to you?”

At its founding, the University of Colorado comprised one solitary structure, Old Main. Rocky grassland surrounded the edifice, and Boulder’s brawny winds buffeted the building, shattering its windows. Politicians said Boulder was the wrong place for the university. 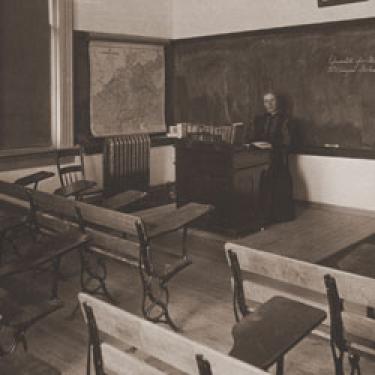 These academic pioneers composed the core of the university, conveying the complementary disciplines of arts and sciences. Debate about the value of such education raged then and lingers now, but there was and is ample evidence of its worth.

The university emulated established institutions in the civilized East, but its inception mirrored the frontier. Workers completed Old Main in 1876, just before Colorado officially became the 38th state.

That was only 18 years after the “Pikes Peak or Bust” gold rush and 15 years after Colorado became a U.S. territory. As historian Ernest Andrade Jr. observes, the earliest Anglo-American settlers in Colorado would have been surprised to learn that within two decades, Colorado would be a state with a public system of primary, secondary and higher education.

“Even though early Colorado was a rough place, most of those who lived there had no desire to see it remain so,” Andrade writes. “Higher education, in particular, was seen as a major civilizing influence.”

CU’s 1881 catalog heralded its desire to civilize the frontier with “ample facilities for liberal education in literature, science and the arts.” Tuition was free. Both men and women could enroll.

The College of Liberal Arts was established in 1892. It became the College of Arts and Sciences in 1921. It is the oldest and largest college at the University of Colorado. Its mission is still central to the university’s.

George Norlin, the “kindly professor of Greek” who served as the university’s fifth president, emphasized this in a 1929 speech to the Colorado Education Association.

CU and other universities were then expanding their professional schools, historian Philip I. Mitterling notes. But Norlin worried that universities might go too far, producing too many specialists — “mere bolts and rivets in a vastly complicated machine.”

Norlin said education should “keep civilization alive.” And that viability required “a curriculum of training in the fundamentals of a common, cultivated life.”

In 1930, that sentiment helped spawn the college’s honors program. Jacob Van Ek, dean of the College of Arts and Sciences from 1929 to 1959, courted students who appreciated “the spirit and method of science, an awareness of social institutions, a sense of the world as one of history, of development, of change.”

The honors program was pioneering, Mitterling suggests. George R. Waggoner, dean of the College of Arts and Sciences at the University of Kansas, did not launch an honors program at KU until 1956 — 26 years after CU. As Waggoner later wrote, the dominant concern in the Depression — when CU launched its honors program — was not nurturing gifted students. It was, rather, enabling “the weaker students to survive.”

By 1960, A&S enrollment had soared to 6,645. A report on the college that year reiterated its commitment to core, “intellectual” values. It stated: “Other values, broadly speaking the ‘applied’ values, cannot be denied nor should they be minimized, but their acquisition should be secondary in the College of Arts and Sciences.”

In the last half-century, enrollment in the College of Arts and Sciences has risen to more than 18,000, and big gains are expected in the coming decades. As always, though, some doubt the value of the liberal arts.

A recent guest opinion in the Rocky Mountain News, for instance, urged Colorado to “de-subsidize” presumably non-marketable degrees. “The modern marketplace is not looking for those able to quote Shakespeare or Kant or tell the subtle differences between late-14th and early 15th-century Andorran tapestries,” the critic wrote.

Such views are neither new nor novel. But they do underscore the need for colleges of arts and sciences to explain their worth. 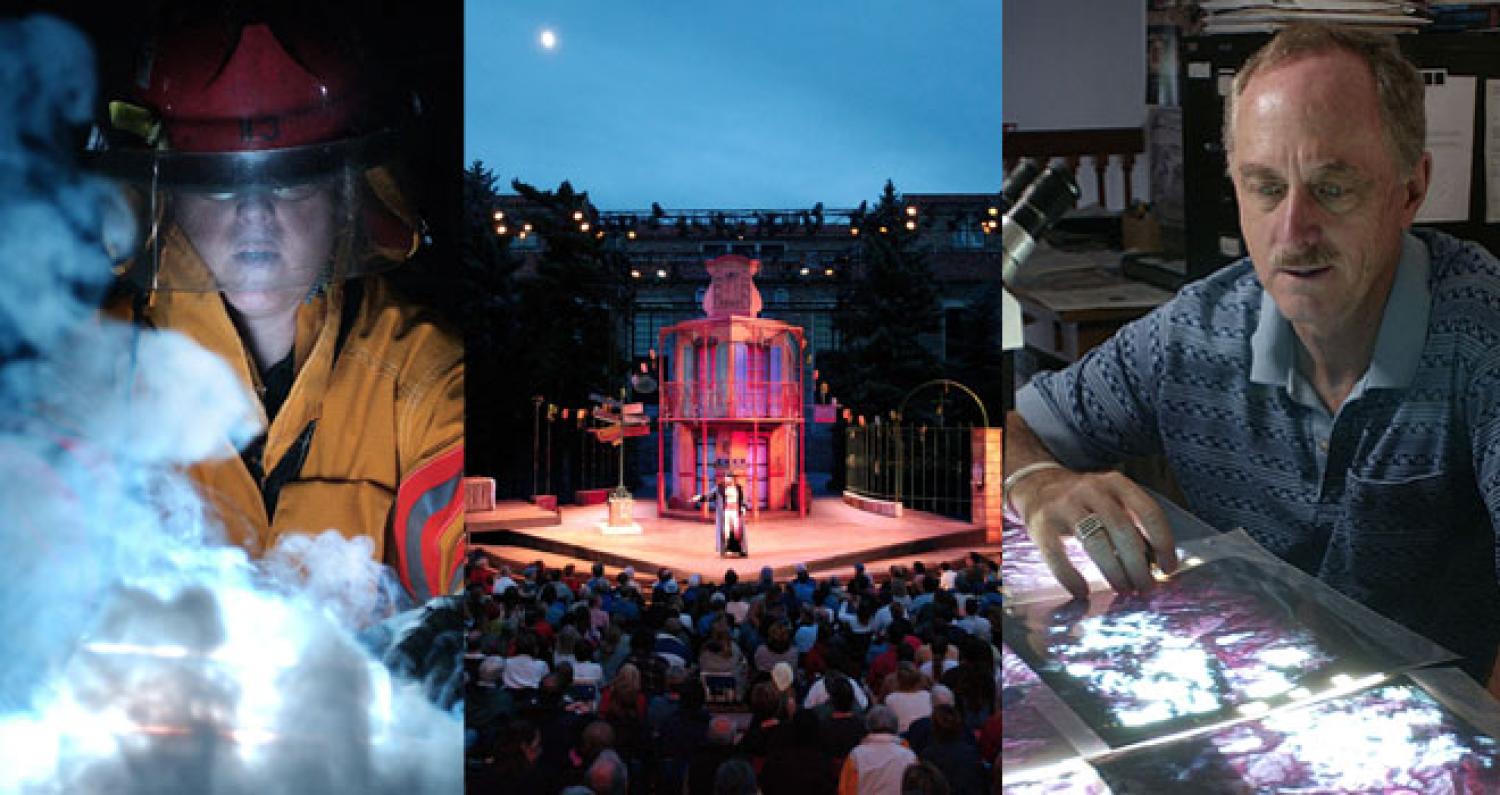 From left to right: Smoke emerges from physics experiment as part of a CU Wizards presentation (lower left); the Wizards have been taking the “magic” of science to young people since 1976. (Photo: Larry Harwood) The moon serves as a dramatic backdrop for a 2004 production of the Colorado Shakespeare Festival, which dates to 1958. In 1975, the CSF became the seventh theatre in the world to complete the Shakespearean canon of 37 plays. (Photo: Casey Cass) Payson Sheets, a college professor of distinction of anthropology, is one of CU’s outstanding faculty members. (Photo: Casey Cass)

Arts and sciences students pursue clearly marketable and broadly focused studies. The most popular majors include hot, emerging disciplines such as integrative physiology, molecular and cellular biology, ecology and evolutionary biology and biochemistry. But the most popular majors also include fixtures of the liberal-arts curriculum: psychology, English, economics, political science, sociology and history.

The arts and sciences faculty specialize in a dizzying array of disciplines, and they work in more than 50 departments, programs and centers.

Faculty in arts and sciences publish about 1,600 peer-reviewed journal articles annually. They produce scores of books, reviews and other scholarly work. They earn hundreds of awards and honors each year.

The fact that the university shines even with comparatively lean funding inspires pride but not complacency. The university knows it must keep striving to excel.

Flagship 2030, CU’s strategic plan, exhorts faculty “to educate our students for jobs that do not yet exist, to solve problems we have not imagined, using techniques we have not yet developed.”

Those goals are practical. But, Flagship 2030 notes, the university must also convey the foundation of knowledge to help students succeed in both work and civic life. The plan is to keep “providing them with a broad understanding of the world around them, critical-thinking and problem-solving skills, a sense of responsibility to others, leadership skills and a recognition of the importance of lifelong learning.”

Since Mary Rippon stepped off that train and into history, the depth and breadth of the university has burgeoned. Old Main is now one of 300 buildings on the Boulder campus. Old Main’s 26,000 square feet once comprised the university. Now, it composes less than 1 percent of the gross square footage of campus buildings.

Hundreds of professors and legions of students now nurture a garden of knowledge sown by their rugged forebears. Today, they still toil at the leading edge. But today, the frontier is no longer geographical. It is academic.

The Old Main Cottonwood is indeed getting new life. In October, cuttings were taken from the canopy of the tree by Facilities Management arborists Aquino and Joel Serafin. END_OF_DOCUMENT_TOKEN_TO_BE_REPLACED

Professors in theatre, biology and environmental studies team up to focus on creatively communicating climate science through the arts and social sciences. END_OF_DOCUMENT_TOKEN_TO_BE_REPLACED