The Army ROTC program at the University of Colorado in Boulder dates back to 1883 with the establishment of the Cadet Corp. 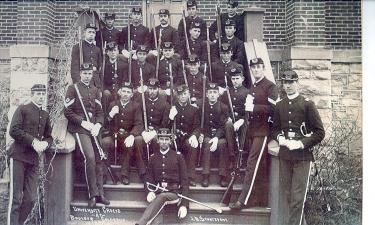 Early members of the Cadet Corps at the University of Colorado on the steps of Old Main in 1888. Photo courtesy of CU Library Archives.

In 1883 students at the University of Colorado in Boulder established a voluntary Cadet corps in order to “drill in the schools of the soldier and the company”. The state of Colorado issued the Cadets Army infantry uniforms, weapons, and equipment. They were supervised by Lieutenant W. Hasson, an engineer officer assigned by the Department of the Navy to the University to help establish an engineering department.

This Cadet Corps, although it had no official military affiliation and did not serve in any military campaigns, represented an early University interest in establishing military officer training on campus. In 1914 the first official military units were established on campus. Troop D, 1st Battalion of Cavalry, Colorado Militia and Engineer Company B, Colorado National Guard, were raised from University students. These two units were federalized and sent to Douglas, Arizona in 1916 following Pancho Villa’s attack on Columbus, New Mexico.

The Birth of Army ROTC at the University of Colorado

On June 3, 1917 the Reserve Officers’ Training Corps (ROTC) program was established by Congress, but the Army declined the University of Colorado administration request for a unit in Boulder. In October 1917 the University faculty voted to establish its own voluntary ROTC program. A retired Army officer, Captain James A. Merritt, was put in command by the University.

In early 1918 the War Department established a Student Army Training Corps (SATC) at the University for students who had been drafted. This program allowed them to continue in school and simultaneously trained them in specialties such as automobile mechanics, radio and telegraphy operations, concrete construction, and general mechanics. Some were allowed to transfer into the Navy while in the program.

As enlisted members they wore uniforms, lived in campus barracks, and were paid $30 per month. Some of the 452 SATC members were selected for commissioning. All of the first 38 to graduate in 1918 were deployed to Europe. After the end of World War I the SATC program was closed.

In 1940 the University requested a ROTC program. The War Department declined but established on campus three enlisted Army reserve training units including Army Air Corps and Signal Corps elements. In June 1942, the Navy moved its Japanese language school from California to the University. During World War II, a Navy enlisted pre-radar, radio, flight, and cooks and bakers schools operated on campus, but an Army ROTC activity was not re-established until 1948. 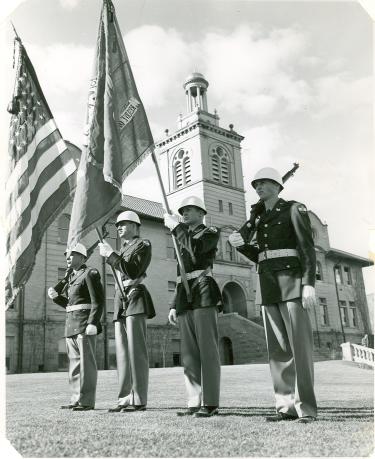 World War II and Beyond

Following World War II the University again requested a ROTC program and in 1948 the Army established its first official ROTC program on campus. The first graduates were commissioned in the Engineer Corps in 1950. The CU program was later expanded to produce officers in all branches.

In 1991, a cross-enrollment (with presence) agreement with the Colorado School of Mines in Golden was established when that school’s host program was closed due to declining enrollment and Army down-sizing. The Army ROTC unit at the Colorado School of Mines was then incorporated into the CU program. This small engineering school had a rich Army ROTC tradition going back to 1918.  In the 1960’s the program was mandatory for all male students and during the Vietnam era the school was known as the “West Point of the West” since it produced more engineer officers than any other institution, including the U.S. Military Academy (U.S.M.A). Today the Mines operation is healthy and represents an important part of the overall CU Boulder AROTC program. The combined unit is one of 270 Army ROTCs in the nation. In 1980, Army ROTC was offered to students in the Denver area by establishing a UC-Boulder Extension Center at Metropolitan State College in Denver.  In 1997 this was closed and replaced with a cross-enrollment agreement.

Students attending AROTC are from partnership and affiliate colleges in the Denver Metro area, such as Colorado School of Mines, Metropolitan State University Denver, University of Colorado at Denver, Regis University, Denver University, Colorado Christian University, and local community colleges. Students participate in the Army ROTC program by attending classes taught at CU Boulder, or by commuting to the nearby Golden campus or downtown Auraria campus.

Overall the total multi-school program traditionally is considered among the best nation-wide, with training scores and retention rates significantly above national norms. Today’s program proudly upholds the tradition of producing young men and women of character who will lead America’s Army.