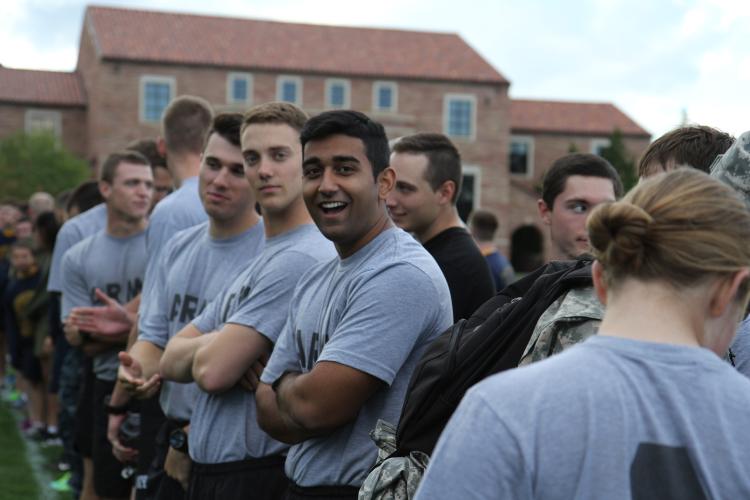 The Golden Buffalo Battalion is the University of Colorado Boulder’s Army Reserve Officer Training Corps Program. This voluntary training program allows students to pursue a college degree while simultaneously completing training in order to commission as a Second Lieutenant in the U.S. Army upon graduation from CU.

The CU Army ROTC program, although headquartered on the Boulder campus, also includes branches at Metro State University in Denver and at the Colorado School of Mines, all of which combine to make up the Golden Buffalo Battalion.  Additionally, cadets from six other universities and four community colleges located in the Denver Metro area participate in the program.  The Golden Buffalo Battalion consists of about one hundred fifty cadets between the three schools and other affiliates.

In addition to twice-a-week Military Science classes during all four years of school, the ROTC program includes weekly labs (the focus of these labs varies, but you can count on firearms familiarization, land navigation, rappelling, and numerous other similar activities during the typical school year), as well as physical training (PT) three times per week.  The culminating event is a single three-day field training exercise (FTX), each semester.  During FTX, cadets typically conduct tactical training lanes, compete on obstacle courses, shoot M4 carbines, fly in Army air assets (UH-60 Black Hawk and CH-47 Chinook helicopters), and take part in many other activities.

The University of Colorado Boulder won the MacArthur Award in 2015, identifying the program as one of the top eight programs in the entire country.

The Golden Buffalo Battalion is to produce leaders of character who are disciplined, resilient, and prepared for the future.