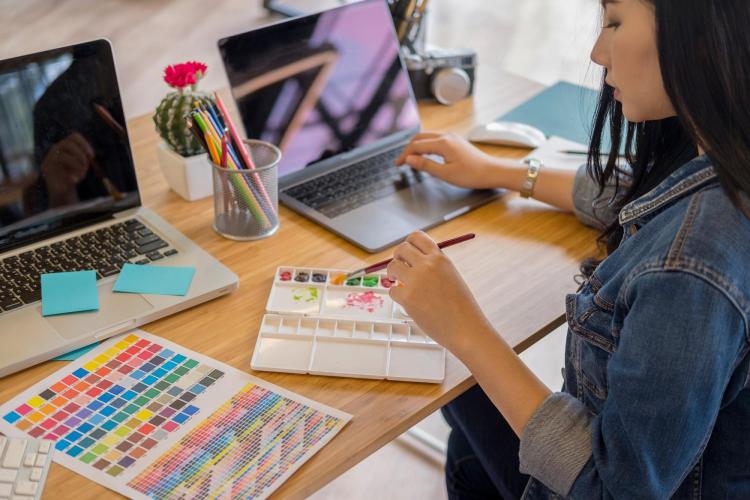 Eager to dive into campus life at CU? Well Buffs, you’re in luck! There are plenty of different ways to get involved on campus and in the CU Boulder community. Whether it is through student organizations, on-campus jobs, attending events or volunteering, there is a place for everyone to find their home in the Buff community.

I spoke with CU students Tania Blanga, Gabriela Tolosa Ramirez, Julia Taylor and Kate Mitchell to hear about their experiences in getting involved by planning and attending virtual events.

Sometimes, you meet people in ways you would never expect. This is exactly what happened to Tania, who is the social media coordinator on the Cultural Events Board. “I had a recitation in one of my classes that I was always late for and so was this other girl so we became friends because we were always late together and started sitting together in class. One day in class, she looked at me and said, ‘Hey I’m on this thing called the Cultural Events Board. You should join, I think you would like it,’ so I went to a couple of their events and felt it out and then applied because I found it was something that I was really interested in. That girl is now the chair and she is one of my best friends, and it all happened because we were late to the same recitation.”

Tania is thankful for that day and said that joining the Cultural Events Board was one of the biggest and best decisions that she has ever made. Part of her role on the board was planning the Black Lives Matter event that took place this September.

As Tania planned the event, she not only worked with her board members but she also got to work with the social media coordinator for the Distinguished Speakers Board along with the Strategic Relations and Communications department at CU Boulder.

“Being on the Board has exposed me to a lot of new people,” says Tania. “I’ve gotten some of my best friends out of it. There’s people that I talk to and Facetime every single day – multiple times a day – because that is the friendship that we have with each other.”

In addition to meeting new people, Tania is also helping make an impact at CU Boulder. “Our mission specifically is to put on cultural events that support misrepresented or underrepresented groups and provide a platform for these groups on campus. Through being a part of the Cultural Events Board, I’ve gotten to have many different conversations with people that have a lot of different perspectives and have a lot of different CU experiences.”

When I asked Tania for some advice when it comes to getting involved, she said “just send it and go for it. What is the worst case scenario, you get on a Zoom call you don’t like? You didn’t go anywhere, you didn’t waste gas on it and you’re probably wearing sweatpants. There are so many perks of Zoom.”

Both Gabriela and Julia have also attended several of the virtual events included in CU Boulder Today’s “10 things to do this week” article, and also spoke about the perks of Zoom events.

Gabriela has attended some of the guided painting classes and said how relaxing it was to take a pause on her heavy load of school work. “At first I was really stressed out because I had a lot of work to do and I wasn’t sure if I had time to attend these events, but it actually helped me to de-stress and put my work aside. I’m studying computer science in the school of engineering so it’s been a pretty tough semester, but having that bit of free time to just focus on me and do something aside from school work was really relaxing.”

Julia is a doctoral student at CU Boulder and has also attended some of the guided painting classes, in addition to the CSI book club event. “I sign up for everything that I see that I’m interested in when I get the emails. There’s so much going on and there are so many opportunities to take advantage of, especially because CU hosts these events for free.”

Zoom also makes it easier for Julia to attend these events. “Since I live far away from campus, the virtual events make it easier for me to participate. It is also nice because you don’t have to leave your home and you can be comfortable.”

Kate’s experience was a little different than the rest. She is a freshman at CU and went through virtual sorority recruitment this fall.

“It was hard to understand or connect through body language. You can’t really get that person's vibe like you normally would in person,” Kate stated as one of the challenges for talking to people virtually. “But I was still able to have good conversations and I still had a good time talking to people and getting to know people.”

Kate said that although it was a little strange connecting with people virtually, she really enjoyed the opportunity to meet people outside of her dorm and build new friendships.

So Buffs, don’t be afraid to get out there and attend some of the virtual events that might interest you! We are all going through these challenging times together and it is up to you to decide what you are going to make of it.