The Magnetospheres and Space Weather Environments of Habitable Planets

While these modeling results paint a potentially bleak picture, there is a very large degree of uncertainty in the space environments to which exoplanets are exposed. The biggest issue is the lack of empirical data on the rate, energy and impact of stellar CMEs. Other than the Sun, no main sequence star has ever been detected to produce a CME. Similarly, direct detection of exoplanet magnetic fields has yet to be achieved and remains the most crucial ingredient in assessing planetary habitability in the context of stellar activity.

Solar CMEs and SEP events can be accompanied by radio bursts at low frequencies, particularly so-called Type II bursts, as well as a subset of Type III bursts (complex Type III bursts). The emission is produced at the fundamental and first harmonic of the plasma frequency and thus provides a diagnostic of the density and velocity (few 100 to >1000 km/s) near the shock front, while the flux density of the burst depends sensitively on the properties of the shock and solar wind plasma (Cairns αet al. 2003).  Ground-based radio astronomy can only trace such events to a heliocentric distance of a few solar radii, whereas space-based radio antennas can trace the propagation of shocks out to the Earth and beyond, which is particularly relevant for characterizing geoeffective CMEs and SEP events. The detection of equivalent interplanetary Type II and III events is the goal of the FARSIDE array.

Solar radio bursts can be extremely luminous, and are likely the most intense sources of extraterrestrial radio emission ever observed from Earth (Figure 2), reaching a flux density > 10-14 W m-2 Hz-1 (>1012 Jy). This corresponds to a flux density of >10 Jy at the distance of Alpha Centauri and 1 Jy at 5 pc. However, these bursts follow a power-law distribution in luminosity, and the brightest bursts are rare and peak at frequencies <10 MHz, which can account for the non-detection of such bursts from solar-type stars thus far. However, the non-detection of such events from active M dwarfs has been surprising (Crossley & Osten 2018; Villadsen & Hallinan 2019). M dwarfs flare to much higher energies and much more frequently than observed on the Sun (Figure 3). A correlation is observed between the flare energy and mass (or kinetic energy) of CMEs observed on the Sun (Aarnio et al. 2011; Osten & Wolk 2015) which, if applicable to M dwarfs, should produce very large CMEs, and associated luminous Type II bursts.

There are a number of explanations proposed why CMEs have not been detected on M dwarfs. The scaling law observed by Aarnio et al. 2011 simply may not extend up to the flare energies observed for M dwarfs. For example, it is possible that CMEs are confined or significantly suppressed by the presence of a significant large-scale poloidal component to the stellar magnetic field, which is often observed to be present on M dwarfs, but is absent on the Sun (Alvarado-Gomez et al. 2018). Although the largest events would still be able to escape to interplanetary distances, this would lessen the potential impact of CMEs/SEPs on the atmospheres of orbiting exoplanets. An alternative possibility is that CMEs are present, but are not detected, simply because the Alfvén speed is too high in the coronae of M dwarfs for a shock to form (Villadsen & Hallinan 2019; Mullan & Paudel 2019). The presence of a shock is an observed necessary condition for Type II emission (and a prerequisite for the generation of most SEP events). Shocks can potentially form at much greater distances from the star, where the Alfvén speed drops below the velocity of the CME, but the associated Type II burst would then be at frequencies below 10 MHz, and undetectable to ground-based radio telescopes.

FARSIDE will detect the equivalent of the brightest Type II and Type III bursts out to 10 pc at frequencies below 10 MHz. By imaging >10,000 degrees every 60 seconds, it will monitor a large sample of solar-type stars in that volume simultaneously, searching for large CMEs. For the Alpha Centauri system, including two solar-type stars and a late M dwarf, it will probe down to luminosities (equivalent to 10-15 W m-2 Hz-1 at 1 AU) for which equivalent solar radio bursts are detected frequently (Krupar & Szabo 2018). The nearby young active solar-type star, Epsilon Eridani (spectral type K2), is another priority target, for which bursts should be frequently detected. For the case of M dwarfs, FARSIDE will be able to detect Type II bursts formed at the distance where super-Alfvénic shocks should be possible for M dwarfs and directly investigate whether the relationship observed between solar flares and CMEs extends to M dwarfs. If it does, FARSIDE should also detect a very high rate of radio bursts from this population.

FARSIDE enables a precision measurement of the Dark Ages 21-cm all-sky spectrum at frequencies 10-40 MHz corresponding to redshifts z=130-35. Such observations have enormous potential as a powerful new test of the standard LCDM cosmological model in the early Universe and would provide constraints on any exotic physics of dark matter. Figure 4 shows models and observations of the global spectrum in the Dark Ages and Cosmic Dawn.

Recent results from the Experiment to Detect the Global Epoch of Reionization (EoR) Signature (EDGES) suggest the presence of a strong feature in the 21-cm spectrum at ~78 MHz (z~17), within the range expected for the “Cosmic Dawn trough.” Figure 4 shows deviations from the standard cosmology for phenomenological models of added cooling to the primordial neutral hydrogen that could be produced by e.g. previously unanticipated interactions between baryons and dark matter particles. The black dashed curve corresponds to the standard LCDM cosmology model containing Pop III stars. While the difference in the observed EDGES redshift can be explained within the standard model, the drop in brightness is about 3 times greater than expected. The “Dark Ages trough”, at frequency <30 MHz and inaccessible from the ground, is produced purely by cosmology and thus cleaner because there are no stars to complicate the signal. This trough is a prime target for FARSIDE.

Significant progress by experiments trying to detect the Global 21cm signal from neutral hydrogen in the intergalactic medium during the Dark Ages, Cosmic Dawn, and the Epoch of Reionization (z>6) has increased the attention on this measurement from the Astrophysics, Particle Physics, and Cosmology communities. In particular, the EDGES experiment has reported an absorption feature that could correspond to the Global 21cm signal, but which is significantly deeper than theoretical models and has other characteristics that depart from expectations. Instrumental calibration, foreground removal, radio-frequency interference, and ionospheric effects remain as issues that transform this measurement into a daunting experimental effort. If the measured redshifted 21-cm signal differs from that of the standard cosmological model, new physics is required.

The major challenge is the presence of bright foregrounds that are 104 times that of the 21-cm signal, which together with chromaticity of the antenna beam, can introduce added frequency structure into the observed foreground brightness temperature spectrum. FARSIDE mitigates these effects in several important ways. First, the array would provide high resolution maps of the sky foreground at multiple relevant frequencies which facilitates the extraction of the 21-cm signal using a data analysis pipeline that we have built based on pattern recognition algorithms informed by training sets that can be obtained from sky foreground observations, lab instrument measurements, beam simulations and 21-cm signal theory. Second an orbiting calibration beacon would permit us to map the antenna beam in the far-field for the first time enabling correction for beam chromaticity effects. Approximately (5000 / square root of N) hours of integration time, where N is the number of antenna elements used to measure the global signal, would separate the standard cosmology from added cooling models at >5 sigma.

Heliophysics: FARSIDE offers the possibility to detect and image solar radio bursts out to large heliocentric distances. Resolved imaging of is essential for establishing the location and spatial structure of the emission and thereby the physics behind the emission.

Outer Solar System Planets: FARSIDE would detect and monitor the auroral and lightning-generated radio emission from the outer gas giants, including Uranus and Neptune In fact, FARSIDE would offer the unique possibility of searching for radio emission from large bodies beyond Neptune out to 100s of AU. This includes, but is not limited to, the putative Planet 9. The expected flux density of Planet 9 is ~10 mJy below 1 MHz, if a planetary magnetosphere is present.

Sounding of the Lunar Sub-surface: FARSIDE has the potential to sound the mega-regolith and its transition to bedrock expected at ~2 km below the surface. The Lunar Radar Sounder (LRS) onboard the KAGUYA (SELENE) spacecraft has provided sounding observations of the lunar highlands [33] and found potential scatterers in hundreds of meters below the subsurface. However, the results are inconclusive due to surface roughness. FARSIDE, by virtue of being on the surface, would not be affected by roughness. Data from a calibration beacon in orbit could be synthesized to identify deep scatterers and the transition to bedrock at km depths by virtue of the low frequencies, which are significantly more penetrating. Deep subsurface sounding can also be performed passively using Jovian bursts from 100 kHz to 20 MHz. The array covers a 10 km × 10 km area on the lunar highlands which could provide a three dimensional image of the highland subsurface structure.

Tomography of the Local ISM: The full three-dimensional structure of the warm interstellar medium (WIM) in the solar neighborhood can be inferred through mapping the emissivity as a function of frequency over a wide range of frequencies with FARSIDE. 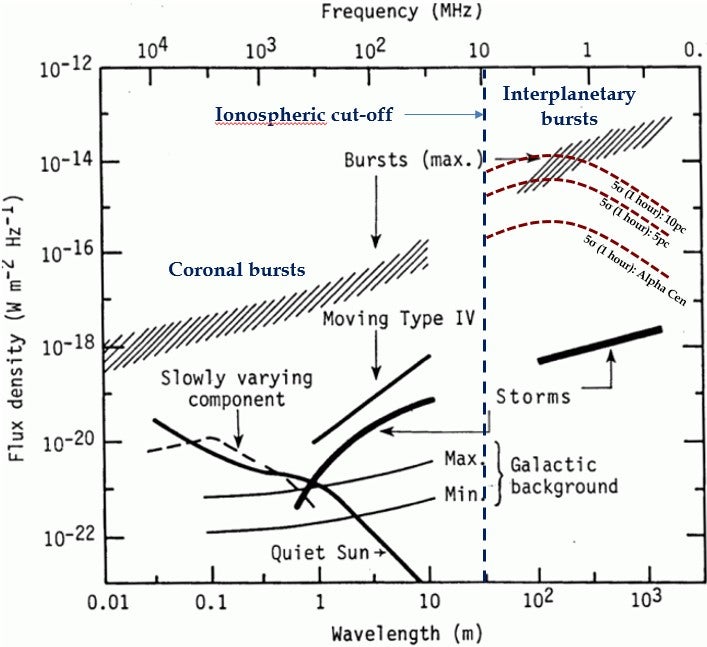 The flux density and frequency/wavelength of the brightest radio sources observed from Earth orbit. The brightest phenomena are solar radio bursts at all frequencies, particularly Type II and III bursts. Interplanetary bursts are the most luminous and are not detectable from the ground. FARSIDE can detect such events out to >10 pc. 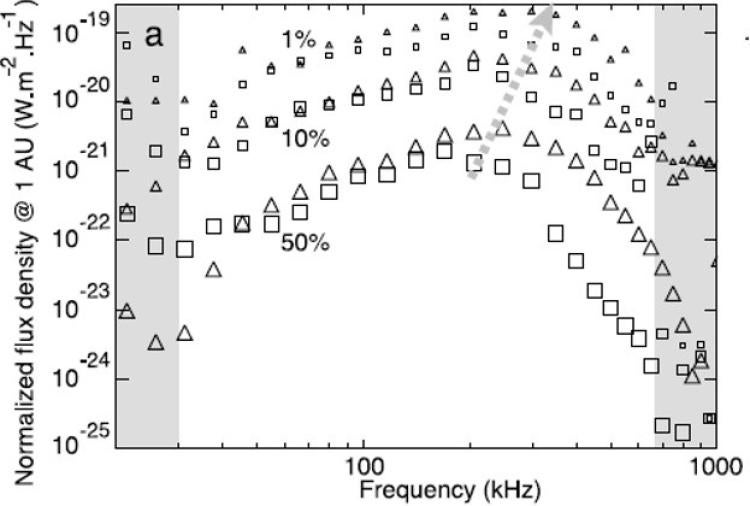 The radio spectrum of Earth’s auroral kilometric radiation for 50%, 10% and 1% of the time. The flux density across the entire detectable band can vary by factors of a few hundred. 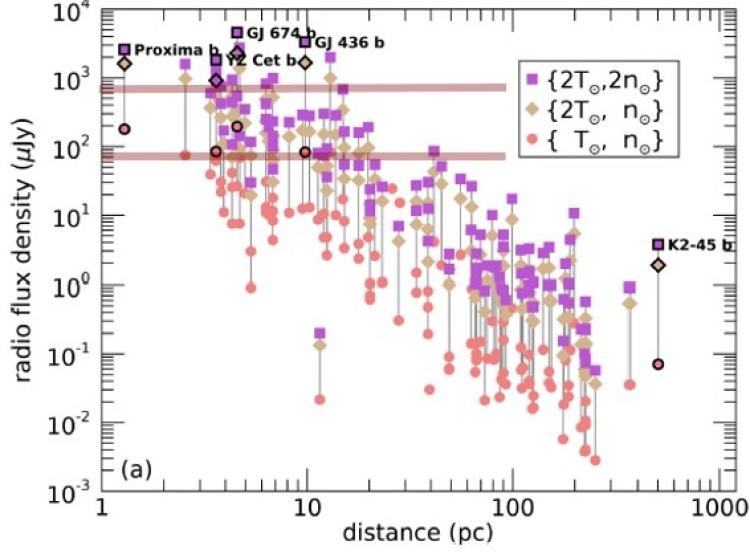 The predicted flux densities (at frequencies <280 kHz) for a sample of known terrestrial exoplanets orbiting M dwarfs. The two horizontal lines highlight the sample of planets detectable by FARSIDE in a 1000-hour integration at 200 kHz (top) and in a one-hour integration where peak flux density is observed to increase by factors similar to observed for the Earth’s AKR (bottom). 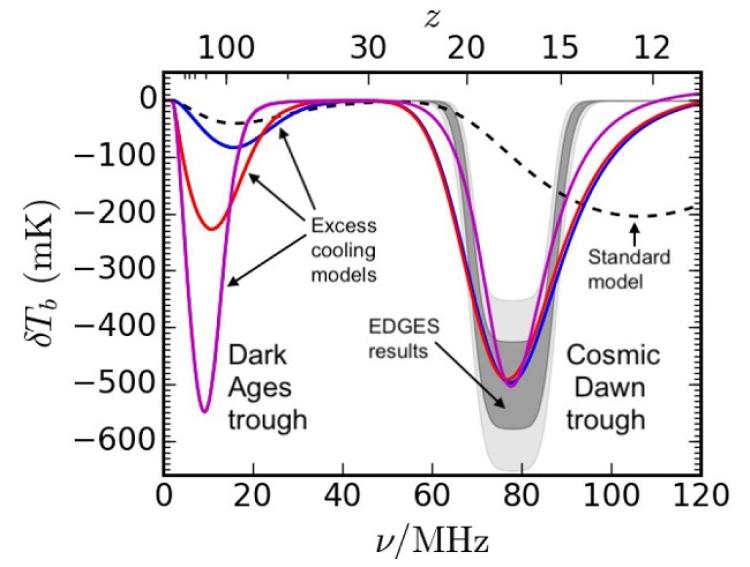 The Dark Ages 21-cm absorption trough is a sensitive probe of cosmology. The black dashed curve shows the brightness temperature (relative to the radio background) in the standard cosmological model with adiabatic cooling. The shape at z>30 is independent of astrophysical sources. The grey contours show the 1 & 2-sigma absorption bands inferred by EDGES. The solid curves are parametric models that invoke extra cooling to match the amplitude in the EDGES signal but also dramatically affect the dark ages absorption trough at z>50. Results from DAPPER concept study.