This is the first postdoc survey conducted at CU Boulder, administered by Institutional Research and the Office of Postdoctoral Affairs in Spring 2018. The survey aimed to address three key questions: What are the demographic characteristics of CU Boulder postdocs? What is the social and professional environment like for postdocs at CU Boulder? What kinds or programming/workshops would postdocs like to see? Furthermore, there was interest in whether results differed based on international status (U.S. citizens vs. non-resident aliens), as well as gender. The results of the survey will be used to improve services and inform advocacy efforts for CU Boulder postdocs. Another postdoc survey will be carried out in 2023.

Note. Any differences due to gender or citizenship status are reported below in italics. Otherwise, the results are statistically equivalent for international and resident postdocs, and men and women.

Who are CU Boulder’s postdocs?

According to campus records, most postdocs are men (70.5%). Nearly half (46%) are not U.S. citizens. The average age is 33 years. About 50% of UCB postdocs are affiliated with research institutes such as CU NIST Prep Program and JILA. One fourth are affiliated with physics, chemical and biochemical engineering, ecology and evolutionary biology, biochemistry, and chemistry, and the remainder are scattered across programs associated with STEM or social sciences. Survey responses indicate that 10% identify with the LGBTQIA community, and 20% have children.

The great majority of postdocs are “Extremely satisfied” or “Somewhat satisfied” with their overall postdoc experience (82%), the quality of guidance/mentoring (83%), and the time being individually advised by their supervisor/mentor (71%). Most also “Strongly Agree” or “Agree” that their postdoc is preparing them for their future career (85%).

Postdocs overwhelmingly believe that their colleagues value their research/scholarship and that their supervisor/mentor supports their career development (94% Strongly Agree or Agree with each of these statements). Fewer agree that they feel like they are part of the CU Boulder community (59%) and postdoc community (46%).

Compared to men, women were:

There was only one item that differed based on citizenship status: interestingly, international postdocs were more likely to agree that “I feel like I am part of the CU Boulder postdoc community,” than U.S. citizens.

Awareness and Use of Resources Encounters with negative experiences were generally rare. The most commonly reported negative experience (13% of respondents) was “someone talking negatively to others about me.” Ten percent reported experiencing verbal hostility, and 10% also reported experiencing denial of access to resources; 8% experienced undermining or impeding their research/scholarship, including being denied or passed over for opportunities afforded to others; and 6% were exposed to hostile electronic communication. A very low number reported unwanted physical or sexual contact (1-2%), or threats to employment status (2%). Due to the small number of respondents who reported negative experiences, we could not break down these results by citizenship status or gender.

Choosing to do a Postdoc 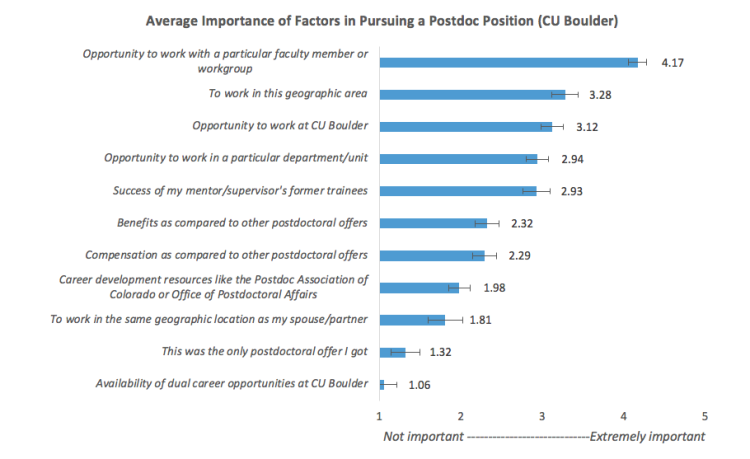 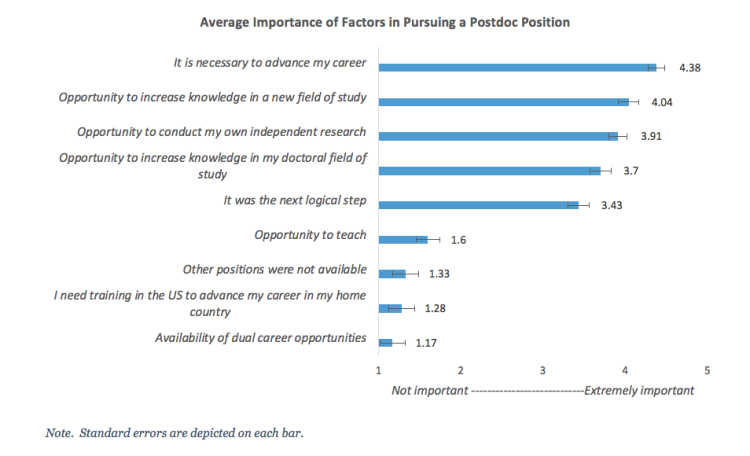 Postdocs felt that their postdoc position helped them develop a variety of skills, especially enhancing field-specific knowledge, fostering critical thinking, and independence as a researcher/scholar. The only two skills postdocs felt had not been developed by their postdoc were teaching and interviewing for jobs.

International students were less likely to agree that the postdoc helped them with writing grant proposals. 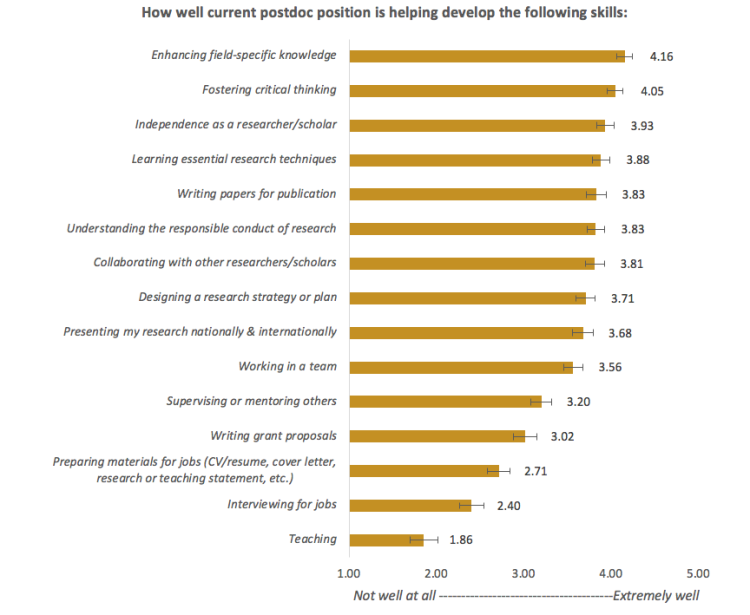 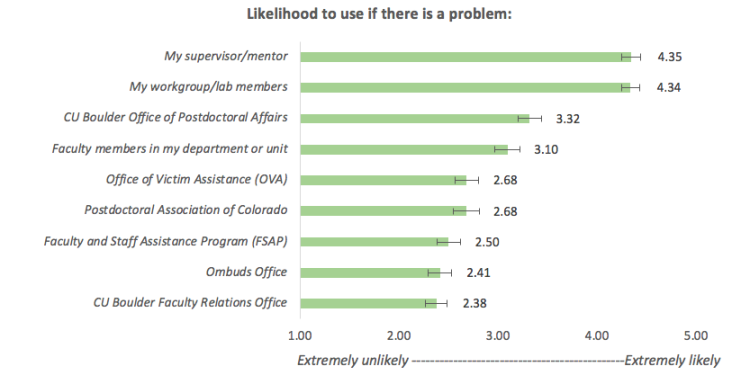 In case of a problem, postdocs were most likely to turn to their supervisor/mentor, followed by their workgroup/lab members, and then the Office of Postdoctoral Affairs.

Compared to U.S. citizens, international postdocs expressed greater willingness to seek out offices/organizations in case of a problem. Specifically, they were more likely to say they would use the:

In terms of programming on jobs, postdocs reported the greatest interest in workshops and seminars on academic positions at research universities or with an institute focus, followed by alternative-academic positions, such as research and grants administration, then industry and teaching/small arts liberal arts colleges. There was less interest in learning about government and freelance/startup positions. 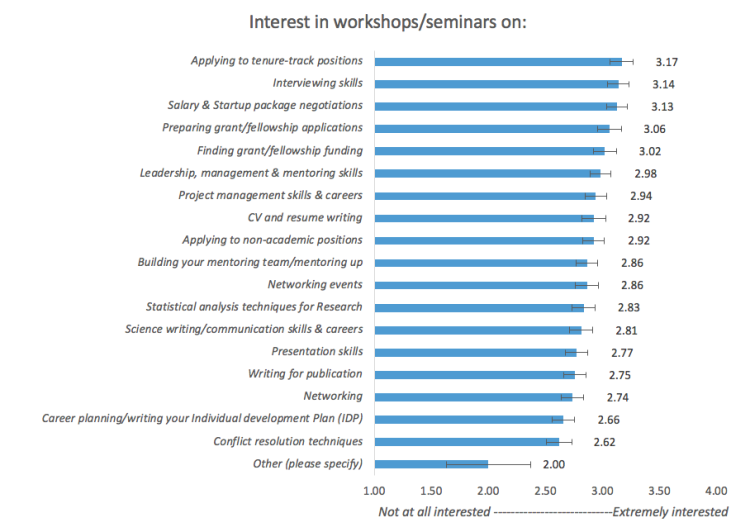 In terms of general programming, postdocs were interested in most of the workshop/seminar topics, but especially applying to tenure-track positions, interviewing skills, salary and startup package negotiations, and preparing grant and fellowship applications.