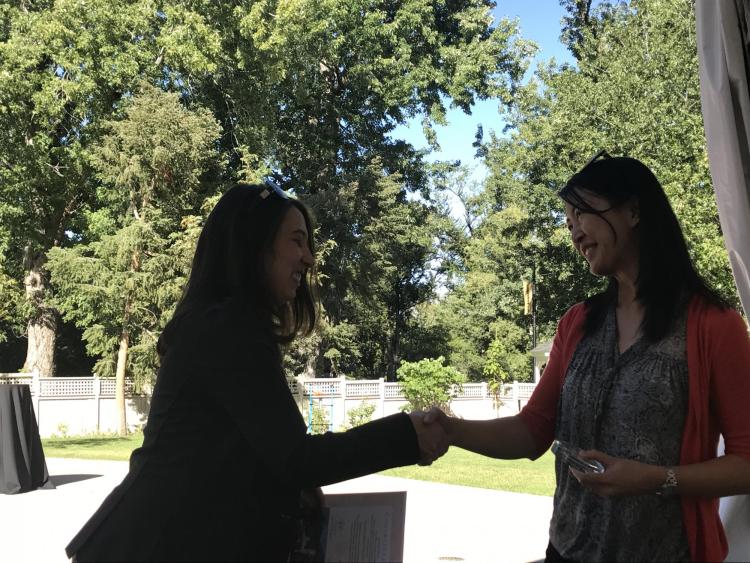 Postdocs are an integral component of the research enterprise at CU Boulder. Postdocs at CU Boulder not only contribute to their disciplines through scholarly works, but also act as intellectual leaders within their teams and beyond. Postdocs are guided by faculty mentors who advocate for their postdocs’ intellectual and career goals while fostering independence to help postdocs prepare for their future careers. The Office of Postdoctoral Affairs (OPA) and Postdoc Association of Colorado (PAC) recognized postdoctoral and mentoring excellence during the 8th annual National Postdoc Appreciation Week (NPAW) in September.

Dr. Julienne Ng, a postdoc in the Department of Ecology & Evolutionary Biology, was awarded the first of two Outstanding Postdoc Awards. Under the mentorship of Stacey D. Smith, an Associate Professor in the Department of Ecology and Evolutionary Biology, Dr. Ng has developed computational tools to complement her bench work to study the evolutionary ecology of color signals in the flowers of tomato plants. A highly published scientist and sought-after speaker, Dr. Ng serves as the PI of a National Science Foundation grant and promotes STEM learning in underrepresented populations through her work with the Upward Bound, Expanding Your Horizons, and Women in Science and Engineering Programs.

The second Outstanding Postdoc Award was conferred to Dr. Julien Allaz in the Department of Geological Sciences, who works under the mentorship of Dr. Kevin Mahan, Associate Professor in the Department of Geological Sciences. Dr. Allaz manages the electron microprobe facility, and is a co-PI on and NSF Major Research Instrumentation award for this work. His research using this instrument has advanced the field of trace element analysis, resulting in numerous awards, invited presentations, and papers. Dr. Allaz also teaches undergraduate and graduate students at institutions throughout the Front Range.

The 2017 Outstanding Mentor Award was given to Dr. Jingchun Li, Assistant Professor in the Department of Ecology and Evolutionary Biology and CU Museum Curator of Invertebrates. In her nomination, postdoc Dr. Lindsey Dougherty wrote of Dr. Li’s encouragement to seek activities & opportunities outside the lab to prepare her for her future career as well as to become a leader and advocate in the scientific and greater communities. Dr. Dougherty also spoke highly of Dr. Li’s generosity with her time and encouragement through hands-on training and regular feedback.

Due to the excellence of his nomination by his postdocs Drs. Alicia Aarnio and Fang Fang, the judges elected to recognize Dr. Benjamin Brown, Assistant Professor in the Department of Astrophysical and Planetary Sciences, as an Honorable Mention for the Outstanding Mentor Award.

To highlight the diversity of postdoctoral research at CU Boulder, this year’s NPAW event included a Flash Talk Competition, in which nine postdocs gave two-minute general audience talks about their research. The winners were Dr. Saba Ghazvini from the BioFrontiers Institute, whose talk was entitled, “The future of biological vaccines: thermostable and single shot,” and Dr. Venkitesh Ayyar from the Physics Department, whose talk was entitled, “Peering inside the Higgs Boson.”

The OPA would like to extend its congratulations to these award recipients and thank the faculty members who served as judges as well as all Flash Talk competitors.