On Sept. 1, 2018, CU Boulder Police was notified of two burglaries that occurred overnight. The first burglary was reported in the Marine Court Apartments at 1350 20th St. 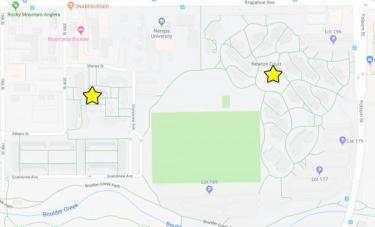 The residents were home around 2 a.m. when they heard a loud noise, believing that it came from outside. When they woke up, the residents discovered that a screen window had been forcefully removed from a window that had been left open. Several items were missing from the apartment, including a computer and a purse.

The second incident took place at the Newton Court Apartments at 1475 Folsom St. Sometime overnight, someone cut the screen on a sliding patio door that had been left open. When the resident woke up this morning, they discovered the damaged screen door and that a computer and some bikes had been stolen. Both apartments were ground-level.

We do not have any suspect information at this time. CUPD is currently investigating these incidents. Anyone with information regarding these crimes is encouraged to contact CUPD at 303-492-6666. If you wish to share information anonymously, information on contacting Northern Colorado Crime Stoppers is available here.

Law enforcement officials encourage all residents to lock windows and doors. A screen on a window or a door, even if locked, cannot stop an intruder.

This message is being sent pursuant to the Jeanne Clery Disclosure of Campus Security Policy and Campus Crime Statistics Act (“Clery Act”), a federal law that requires disclosure of major crime and policy information. For more information on the Clery Act and CU Boulder’s policies, please see the Clery webpage.