What is Community-Engaged Scholarship?

What is Community-Engaged Scholarship?

This type of scholarship seeks active partnerships between the university and the community as a way to generate and apply mutually beneficial and socially useful knowledge and practices.

Our office developed a Continuum of Engaged Scholarship to describe the various types of academic work that we support. Scholars engage with communities by presenting their academic work, developing projects for partners or co-constructing programs. This work also can move along the continuum, depending on the needs and interests of community or campus partners.

Contact our office to learn more about how we support engaged scholarship.

Or consider attending a community-engaged scholarship coffee hour or a national conference. 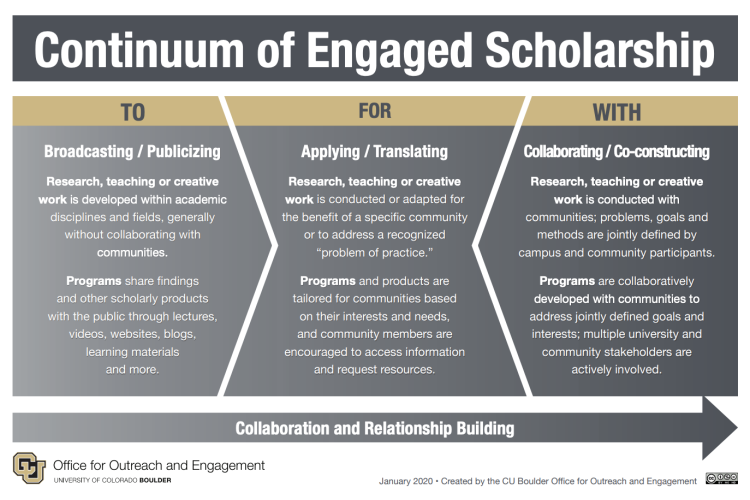 Research, teaching or creative work is developed within academic disciplines and fields, generally without collaborating with communities.

Programs share findings and other scholarly products with the public through lectures, videos, websites, blogs, learning materials and more.

Research, teaching or creative work is conducted or adapted for the benefit of a specific community or to address a recognized “problem of practice.”

Programs and products are based on community interests and needs; community members are encouraged to access information and resources.

Research, teaching or creative work is conducted with communities; problems, goals and methods are jointly defined by campus and community.

Programs are developed with communities to address jointly defined goals and interests; many university and community stakeholders are involved.

Jan. 2020 • Created by CU Boulder Office for Outreach and Engagement

The field of engagement scholarship

Community Engagement
The collaboration between higher education institutions and their larger communities (local, regional/state, national, global) for the mutually beneficial exchange of knowledge and resources in a context of reciprocity. (Carnegie Foundation, 2007)

Engaged University
One fully committed to direct, two-way interaction with communities and other external constituencies through the development, exchange, and application of knowledge, information, and expertise for mutual benefit. (American Association of State Colleges and Universities, 2002, p. 7)

Reciprocity
A quality of processes based on equitable “give and take” between partners in a shared endeavor (in decision-making, resource contributions, etc.)

Mutual Benefit
Outcomes that substantially address the goals and needs of all partners in a collaborative effort.

Journal of Community Engagement and Scholarship

The Journal of Community Engagement and Scholarship (JCES) is a peer-reviewed international journal through which faculty, staff, students, and community partners disseminate scholarly works. The JCES integrates teaching, research, and community engagement in all disciplines, addressing critical problems identified through a community-participatory process. This journal is sponsored by the Engagement Scholarship Consortium.

The Journal of Higher Education Outreach and Engagement (JHEOE) is a peer-reviewed, interdisciplinary journal for the advancement of theory and practice related to all forms of outreach and engagement between higher education institutions and communities. This journal is sponsored by the Engagement Scholarship Consortium.

CU Boulder researchers across disciplines are committed to advancing this type of scholarship. Here are some articles and books focused on this research:

Coburn, Penuel and Geil (2013) describe research-practice partnerships (RPPs) as long-term collaborations between practitioners and researchers that are organized to investigate problems of practice and solutions for improving institutional contexts (e.g. schools and school districts, etc.). This article reviews empirical research on RPPs in education and other fields.

This article draws from joint university and community work in a two-year study of RPPs to present a framework for analyzing how researchers and community partners “perceive and navigate differences they encounter in the context of research–practice partnerships”. The discussion utilizes concepts of boundary practices and boundary crossing examine the process of collaborative work and to push back on one-way translation metaphors.

This article presents a framework outlining five dimensions of a community-engaged research trajectory: (1) establishing partnerships; (2) developing trust; (3) working with diverse linguistic practices; (4) planning for different forms of action; and (5) outcomes and dissemination. This framework is developed as a formative evaluation tool intended to be used throughout the research collaboration to inform the iterative process of learning collaborations and design work. The approach draws on a five-year community-engaged research project and is intended to support community-based researchers in generating methods of engagement that can expand opportunities for non-dominant community members.

Using his influential position as president of the Carnegie Foundation for the Advancement of Teaching, Boyer analyses findings of a survey of faculty members across the higher education sector and the nation. He introduces a typology of four interrelated and essential scholarly activities: the scholarships of discovery, integration, application and teaching. Against the growing tendency to identify faculty work with discovery (“research”), Boyer presents an empirically and theoretically-grounded vision of an academic community which affirms the diverse talents of its faculty and staff members and that appreciates the different functions of various disciplines, fields and institutions. Cited 12,470 times (February 11 2019, Google Scholar), Boyer’s seminal work was re-published in a 2015 expanded edition including essays on its background, impact and ongoing influence.

This piece, published immediately following Boyer’s death, appeared in the first issue of what would become the Journal of Higher Education Outreach & Engagement. In it, Boyer builds upon his call for “enlarging the perspective” in 1990’s Scholarship Reconsidered and introduces the term scholarship of engagement. Boyer argues that “what’s needed is not just more programs, but a larger purpose, a larger sense of mission” (p. 20) and a recommitment to traditions of public service in urban as well as rural contexts to help solve the problems of the 21st century.

In this article, the concept and practice of “translational ecology” is explained and illustrated with numerous examples of scientists working with stakeholders (e.g. resource managers, non-profit organizations or community groups) to address questions of shared importance. The authors emphasize the utility of co-produced science, that generates results which can genuinely be used and applied by the stakeholders in decision-making and resource management contexts. Constraints and challenges (with suggested solutions) in this collaborative process are discussed from the perspectives of both the scientists and the stakeholders, in terms that allow this article to be relevant across many disciplines.

The Kellogg Commission on the Future of State and Land-Grant Universities existed between January 1996 and March 2000 in order to create awareness among public universities of the need for higher education reform. This report in the series focuses on university engagement.

This annotated guide offers the best information available on engaged scholarship, as well as models, exemplars and original essays. It was developed by The Research University Civic Engagement Network (TRUCEN), which is coordinated by Campus Compact.