Creator of the 1619 Project to give MLK commemorative talk 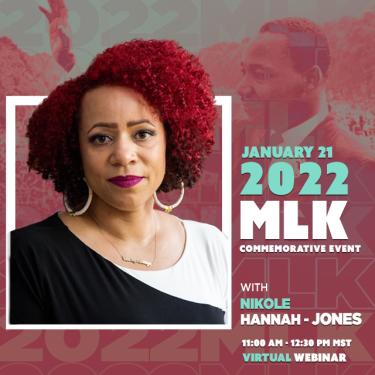 To commemorate Martin Luther King Jr. Day, the University of Colorado Boulder invites the public to join a conversation about King’s legacy and the importance of truth and history with Nikole Hannah-Jones, a Pulitzer Prize-winning professor at Howard University and racial injustice reporter.

The virtual MLK commemorative event will be held from 11 a.m. to 12:30 p.m. (MST) Friday, Jan. 21. It is a free event open to the public, and those interested can register online for the event.

Hannah-Jones is a nationally acclaimed journalist who covers civil rights and racial injustice issues for The New York Times Magazine, where she is a staff reporter. Throughout her career, she’s won a multitude of awards and honors, such as being recognized in Time Magazine’s 100 Most Influential People of 2021.

In 2020, Hannah-Jones earned a Pulitzer Prize for her essay, “Our Democracy’s founding ideals were false when they were written. Black Americans have fought to make them true.” The essay was part of The New York Times’ The 1619 Project, which Hannah-Jones created to commemorate the 400th anniversary of the beginning of slavery in what later became the U.S.

What: 2022 MLK Commemorative Event: A Conversation About The Importance of Truth, History, and the Legacy of Dr. Martin Luther King Jr.

Where: Virtually, register here. The free event is open to students, faculty, staff and the public.

In addition to conducting her own investigative journalism, Hannah-Jones is also dedicated to teaching and empowering others.

In 2016, she co-founded the Ida B. Wells Society for Investigative Reporting, a training and mentorship organization for investigative reporters of color. She is also a professor and the Knight Chair of Race and Journalism at Howard University, where she is working to found the Center for Journalism and Democracy.