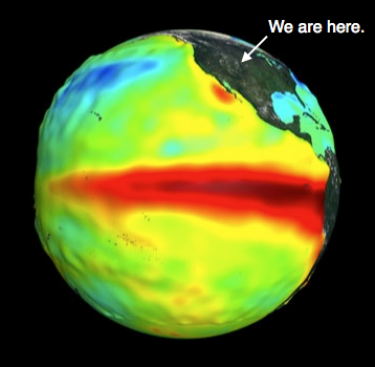 Here in Boulder, the nearest ocean is far away–820 miles from campus to the Southern California Bight. So, why do the tropical oceans matter, even to citizens of Colorado (and the world)?

One could sail the Pacific continuously along the equator from Indonesia to the Galápagos and travel 38% of the way around the planet (9,562 miles). The tropical Pacific alone (between 23°S and 23°N) accounts for 17% of the planet's surface area (32.6 million sq. miles). Knowing the tropical oceans is fundamental to knowing our planet.

Answers based solely on such facts may be of little practical consequence, since the majority of those 32.6 million sq. miles is uninhabited. The more pragmatic answer is that what happens in the tropics does not stay in the tropics, due in large part to the El Niño–Southern Oscillation (ENSO). ENSO is a natural cycle between warm and cool ocean temperatures in the tropical Pacific that occurs every 2–7 years. Because the global atmosphere is very sensitive to even small changes in tropical ocean temperatures, most of the published scientific papers about ENSO (now well over 10,000) focus on the impacts of ENSO outside of the tropical Pacific–including the nation’s breadbasket.

The western U.S. including Colorado is faced with the challenge of a growing, changing population and limited water. The effective management of freshwater resources requires predictability of rainfall and other hydrologic processes, and much of our current seasonal predictive capacity is derived from ENSO (1, 2). However, the impacts go well beyond seasonal weather conditions. To name just a few examples, ENSO influences major U.S. droughts including the Dust Bowl of the 1930s (3–6), U.S. tornado outbreaks (7, 8), global human health including Cholera (9, 10), Atlantic hurricane activity (11, 12), global monsoon systems (13–15), even temperature and winds on the West Antarctic Ice Sheet (16, 17).