Orion Is Challenged By Scorpio

As we gaze up at the stars in the night sky, we can only guess at what mysteries it holds. What we can experience, though, are the planets in our own solar system. The five brightest planets of Mercury, Venus, Mars, Jupiter, and Saturn can easily be identified if the observer knows where to look. In our current mid-May sky, Jupiter is most easily seen. Looking high into the southern sky after dusk, we can see the sun’s light reflecting off this massive planet. It is incredible that the light is not cancelled out by the bright, nearby moon. Mars and Saturn will be below the horizon after dusk, so the most optimal time to view them is around 10:30pm. Three bright objects will form a triangle on the south-eastern horizon. Mars will be the object highest up in the sky, and Saturn will be the most eastern side of the triangle. Lastly, the bright star of Antares over 600 light years away will form the third side of the triangle.

Antares, the 16th brightest star in the sky, resides in the middle of the constellation Scorpio. This constellation’s story is linked to Greek mythology when Orion the Hunter created tension with the Earth goddess by boasting about his hunting skills. To fight against this mighty hunter, the Earth goddess summoned a giant scorpion that hunted Orion. Today as we look up at the stars, Orion and Scorpio will be on opposite sides of the sky due to the battle between them. As time continues into late May and early June, watch as Scorpio rises in the sky and rests on top of Lone Cone to the south.

Throughout the months to come, people will be admiring the stars and their formations and watching the planets move thought the sky. To better measure the distances between these distant objects, we can simply use our fingers. For instance, placing your arm at full length and extending your little finger vertically, it will cover up a distance of one degree in the sky. Additionally, a horizontal fist can represent 10 degrees and an outstretched little finger and thumb will cover a distance of 25 degrees. This can be a handy way to monitor the distances between certain bright objects as we see them at night. 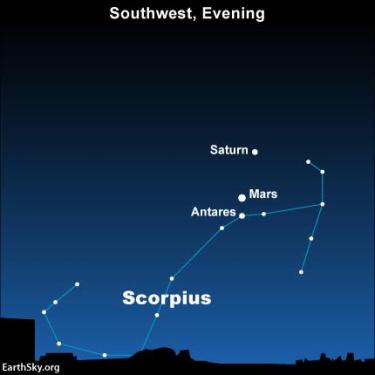 Image by Earth and Sky