Astronomers Across the Country

Now that Norwood has its own astronomical group, we can join the ranks of many others across the nation. We’ve already interacted with Black Canyon Astronomical Society and Longmont Astronomical Society, but by looking at others in our region, we can find out new ideas of how to grow as a group. They stretch all around us from the few hundreds of members in Albuquerque NM and Price UT to the seven members in the Grand Canyon Astronomical Society. Now take those hundreds of organizations and add to them the ones that are certified as “Dark Sky” and you’ll see that astronomy is not a small hobby in the world. In fact, some people in these groups even perform their own research about their observations and try to unravel certain mysteries.

Once we begin regular star parties of our own, we can incorporate some of the others’ ideas. One would be including the surrounding schools. As part of a science class or club, teachers and students could gather around several amateur astronomers who will then share their passion for the night sky. This would give kids real experience in the scientific field instead of the expected lecture, possibly leading them in a positively different direction to start their life.

As we all share an interest in the night sky, different astronomical groups often get visitors from other group members or from people passing by. By doing this we can stay current on new sights to see and the best technology to use. People interested in astronomy are not few and hard to come by. In Boulder Colorado, the University has an astronomy group apart from the actual city’s one. Nevertheless, the group on the university campus holds public meetings to allow people to use their instruments and teach them about the night sky. I assume that other universities do the same, so between astronomy clubs, dark sky towns, and colleges, there are opportunities to delve into astronomy all around us.

My opinion though? I believe that Norwood has the best group out of any of them. The fact that our light pollution level is one of the lowest ever recorded means that we can see more objects and enjoy them more than any other group. I suggest that we all take advantage of this opportunity, but if traveling on a vacation in the future, consider stopping into one of the other groups around the country and experiencing what they have to offer. Each group should be different, and that’s what makes it so great to share the experience with other groups. As Stephen Hawking once said, “To confine our attention to terrestrial matters would be to limit the human spirit”.

Here are some links to the Dark Sky Communities and Astronomical Societies.

As we move into February, Orion is already on the move across the night sky with his two hunting dogs behind him. Canis Major and Canis Minor can be seen as early as 7:00 pm behind Orion. Canis Major is the easiest to spot because it contains the brightest star in the sky (other than our sun of course). Sirius, or the Dog Star, for where it’s located, is almost directly lined up with Orion’s belt. Canis Major contains many other faint stars, but Sirius may be too bright to see them. This dog can be found chasing Lepus, the hare, right in front of it. Canis Minor is also following Orion but is more to the north. You will find Procyon in the heart of that constellation if you roughly follow Orion’s two shoulder stars. Procyon should also be easy to find as it is the seventh brightest star in the night sky. These two dogs follow Orion throughout the sky and aide him in his hunting.

Within Canis Major there is a nebula creating new stars. Thor’s Helmet, as it is called, is being made possible by the star in the center which is going to explode relatively soon in a supernova. The layers that are being blown off by the stellar wind serve as a breeding ground for new baby stars to form. A picture of this is shown below.

Lastly, looking in the other direction, enjoy the presence of our evening planet shining in the west, Venus will star to diverge from Mars during the course of the month and start getting lower each night. 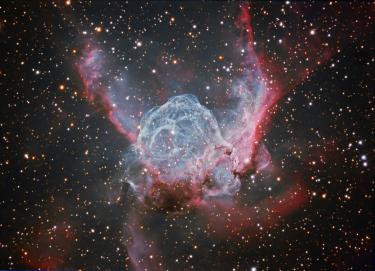 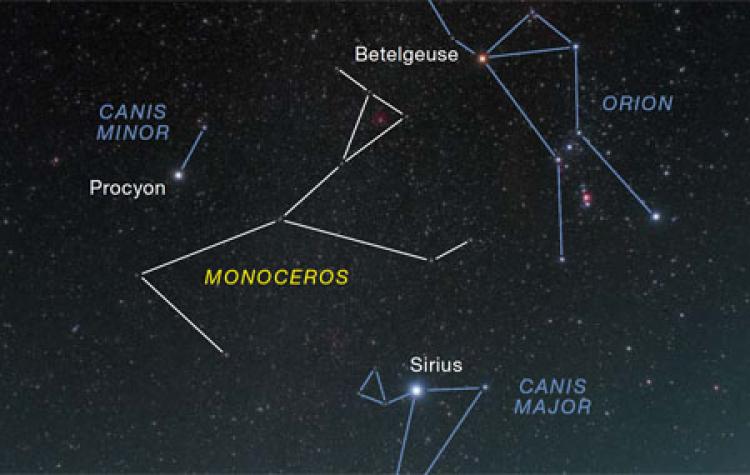