The sun is Earth’s primary source of energy (a minor source is heat from the origin still dissipating and nuclear heat generated in the Earth’s core). It is the only star visible during the day (except for very rare and very large supernova star explosions) because it’s enormous luminosity, mainly scattered light, obscures all but, occasionally, the moon. However, if you block out all that scattered light you can see stars. But how? If you can find an abandoned factory that has a tall smokestack and can look up through it, all the scattered light is mostly absorbed and if the sun elevation is not over the stack, you can see stars. It’s an adventure to find one in a field, crawl into the abandoned fire box, look up and see stars in the middle of the day!

There are some really obvious questions you can ask about the sun but hardly anyone does and the answers are both fascinating and important to life on Earth.

For starters, where in our galaxy, a minor one of billions upon billions in the Universe, is our Sun?

While we humans may think of ourselves as exceptional, our location is not and that is probably the reason we are even here! Our sun is located in a “spur”, a blip, on a minor arm of our minor spiral galaxy. The major arms are named after the main constellations associated with them. That really bright spot in the center is very violent with a black hole eating all the stars around it, explosions of stars, and great eruptions of killer radiation. Enjoy “mediocrity”, it is life-giving.

It is a newcomer that formed about 4.5 billion years ago (the Universe is about 14 billion years old) with about another 4 billion to go before it uses all its fuel, cools and becomes a white dwarf star. It will have incinerated the Earth in the next 2 billion years. Now that’s global warming to the max!

The Sun makes up 99.8 percent of the total mass of the solar system! Jupiter, Saturn, and Neptune, our gas giant planets, really don’t count for much. The sun’s fire is created by nuclear fusion, when the great pressures at the interior squeeze two hydrogen atoms together to form helium and energy. That energy, in the form of light and heat, takes a million years to get from the interior to the surface where it is radiated into space. Only a tiny portion of that radiated energy is what “fuels” planet Earth.

The Sun has a huge magnetic field. Interactions of the hot surface and near surface gasses and that magnetic field cause storms on the sun and “reconnections” of broken electromagnetic fields which spew energized particles into the solar system which cause auroras and can even disrupt human-built electric grids. These ejections of energized particles and radiation are a hazard to space travelers, including the current astronauts on the International Space Station where they can retreat to radiation-protected areas during the storm; like us, they get Space Weather reports daily.

This December’s night sky will be filled with new arrangements of constellations and planets. Starting with the most well-known group of stars, Ursa Major, the big dipper, will be on the northern horizon at dusk when Cygnus the Swan (the big cross) and Pegasus the flying horse (the big square) will be on each side of the highest point in the sky, the zenith. Scorpio has descended Lone Cone and has set in the west while Orion ascends in the east. As one of the easiest group of stars to recognize, the Hunter’s belt will be rising around 9pm. These three belt stars direct you to a very bright star called Aldebaran; the brightest in the constellation Taurus. Following Orion’s belt through Aldebaran, you should see a tiny group of fuzzy stars; these are the Pleiades. This is star cluster of about 800 stars but only about 7 can be seen easily with the naked eye. Around 7pm, Venus can be seen following the setting sun. Two hours beyond that, or about 15 degrees away from Venus along the ecliptic, is red-faced Mars. Also, see if you can find faint Neptune which follows Mars by about the same 15 degrees. 15 degrees is about the distance between your thumb and pinky when your arm is stretched out in front of you. 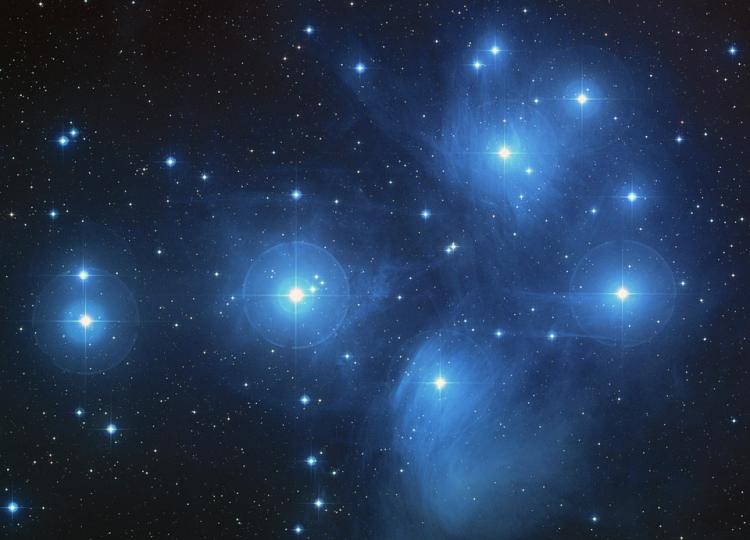 This is a close up of the Pleiades star cluster. The stars are blue which means that they are large, hot stars which burn through their fuel quicker than others.