Welcome to the new format for Star Stories. For the foreseeable future it will be a monthly column with various contributors and will contain Heavenly Outlook, looking at astronomical events for the coming month so you can be prepared to see astronomical events; we’ll also have a figure relating to the story or outlook. We will alert you to supplementary figures on the website.  Comments always welcome: (email address).

Heavenly Outlook for the Month (8-midnite unless noted)

Did you notice our view of the Milky Way has moved from N-S in August to NE-SW in October? By January it will be N-S again. We will do a column on the Milky Way soon. Venus continues to grace the evening sky moving higher in the sky. It still sets before 10pm, providing a short but intense light show just before it goes down. Between the 4th and 5th is the peak of the long-lasting Taurid meteor shower; expect 5-10 meteors/hour and can come from any direction. The Taurids end in mid-December. The full, “super” moon on the 14th is called the Beaver (Native American) or Hunter’s Moon (Anglo-American). At this time the moon is closest to the earth, making it slightly larger and brighter. The 16th -17th bring the Leonid Meteor shower (15/hr; all directions) but the constellation Leo is not visible now. Best viewing before 10pm because of the waning moon which is still bright. Now the Pleiades, a star group, is high in the sky near Taurus, which looks like a slingshot on its side in the NE sky. You see the Pleiades regularly but probably don’t realize it. Maybe if I said “Subaru” you could relate; look closely at the Subaru symbol. On the 21st the Moon dances with the star Regulus and on the 24th the Moondance is with Jupiter but you must get up early to see it (3am).

As previously mentioned, a few astronomers from around Colorado had an observation night where they tested the light pollution of Wright’s Mesa and took pictures through amazing telescopes. One of these pictures is shown below, taken by David Elmore; this is the Andromeda Galaxy. It is also known as Messier 31 or M31; Messier is the name of an astronomical catalog. This image represents the first deep space picture taken from Wright’s Mesa; the dawn of a new era of stargazing in Norwood! Our Dark Sky certification effort is now officially the “Norwood Dark Sky Community” along with you, it also comprises many amateur astronomers who have telescopes capable of this kind of images. The chair of our new Board, Woody Wood, just purchased a weather resistant observation dome for a viewing site on Pinon Wood Ranch.

When you look at the picture, try and feel the awe of being able to see over 2.2 million light years away. Andromeda is about double the size of our galaxy, containing about one trillion stars, but has the same spiral shape. This image represents the first deep space picture taken from Wright’s Mesa; the dawn of a new era of stargazing in Norwood! 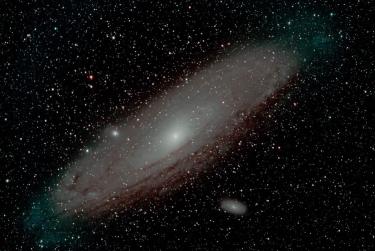 While we fine tune our dates for future star parties, so that you can see these deep space objects through a telescope, try finding the Andromeda galaxy with binoculars. Since it is so massive, it can be seen as a slight “smudge” in the night sky if you know where to look. This closest galaxy to us will be between the two famous constellations of Cassiopeia and Pegasus; almost due south in November. Pegasus, the flying horse or The Great Square, is most easily seen by the four bright corner stars of the square. Right beside Pegasus is the queen Cassiopeia, seen as a W in the sky, resembling her crown. The Andromeda Galaxy can be seen between these iconic star patterns.

Andromeda is a neighbor in a Local Group of galaxies. In about four billion years, it will enter a violent collision with The Milky Way at 250,000 miles per hour! Extreme forces will scatter and destroy many stars in both galaxies. The velocity will carry the Andromeda Galaxy past ours but our gravity will pull it in again for another impact. This will happen cyclically until the two massive black holes at the center of each galaxy merge together. After the impact, there will probably be no discernable spiral to the galaxy anymore and will have more than doubled the number of stars that could be seen in the sky. Again, this will happen in four billion years, so if you’re worried about not being able to finish that great TV series, you can stop worrying now. 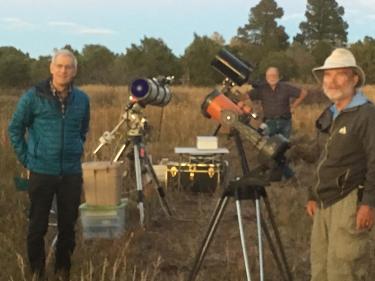