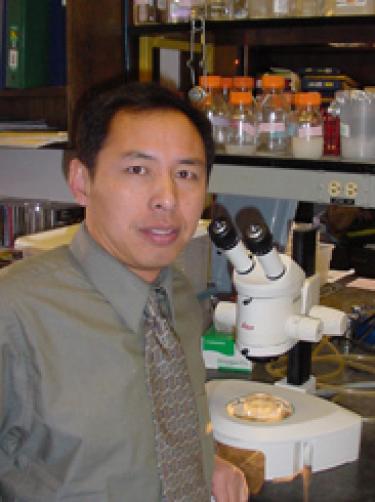 Dr. Han is an Associate Professor of Molecular, Cellular, and Developmental Biology at the University of Colorado at Boulder, an assistant investigator of the Howard Hughes Medical Institute, a member of the Cancer Center at the University of Colorado Health Sciences Center, Denver and Adjunct Professor at Fudan University, Shanghai. He obtained his Ph.D. degree in molecular biology at the University of California, Los Angeles, with Michael Grunstein. He began his research on Caenorhabditis elegans as a postdoctoral fellow with Paul Sternberg at the California Institute of Technology. Dr. Han was a Life Science Research Foundation fellow, a Lucille P. Markey Scholar, a Searle Scholar and a Basil O'Connor Scholar. Dr. Han’s laboratory uses the nematode Carenorhabditis elegans and mouse to study several basic biological problems including mechanisms of Ras-mediated signal transduction and its interaction with other regulatory pathways, control of cell division, fusion, shape and movement during morphogenesis and nuclear migration and anchorage. The laboratory has also initiated a project to study the functions of lipid synthesis/metabolism in development, behavior and human diseases. Research in his laboratory is supported by funds from the Howard Hughes Medical Institute and National Institute of Health.