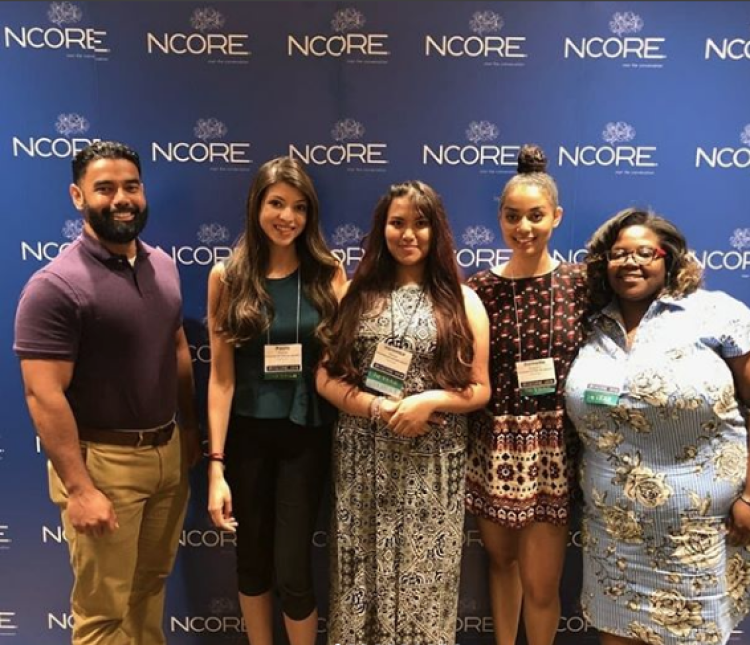 This May, I had the honor to attend The National Conference On Race and Ethnicity (NCORE) in New Orleans with the McNeill program staff. NCORE was an unforgettable experience. The fact that I was in the middle of a multicultural wave of highly educated individuals was amazing. I attended a variety of sessions I had interest in. Among my favorite were; Making Visible a Crisis of Representation: The Absence of Women in STEM,  Latinas and Mental Health, and Black Women Entrepreneurs. The topics reflected my journey at CU, from starting as an engineering major (STEM) to having to drop it, keeping my Spanish major (First Gen Latina in College)  and finding a new career I would be as passionate about (Entrepreneurship). I struggled to find what I wanted to do that gave my degree a further meaning than higher education, but I found it through every person I met along the way at CU, and NCORE validated my experiences.

Dr. Mary V. Alfred from Texas A&M University presented the topic “Making visible a Crisis of representation: The absence of Women in STEM.” Dr. Alfred asked us to introduce ourselves and shared our field of study or expertise. I shared that I was there because I changed my major from Engineering to Spanish. This session was very emotional and validating due to the variety of research and experiences shared. Dr. Alfred noted that factors affected by the crisis of representation of women of color in stem are a global, economic, and is a social justice issue. Dr. Alfred’s research includes: “social and institutional influence in early years, public schooling, STEM careers, STEM education and women of color, navigating the workplace, and advancing women of color in both the education and the workplace.”  Many topics are influenced by social factors, such as gender stereotypes, social media influence, family influence and early socialization. A student’s career begins when they are children, where they are influenced by the people around them. There was a great discussion during the presentation and just being in there with all these women who shared their success in STEM felt very emotional and comforting because it was reassuring me that I was lacking the resources to thrive in STEM since I was a child, not just in college when I attempted an engineering degree. I reflect a lot on my area of study and the fact that it isn’t the one I initially came to CU for and I think about what I can do to stop this underrepresentation in STEM regardless of my major.

One of my top choices of sessions attended was; Latinx Mental Health: Current Trends, Sociopolitical Factors and Implications. This was also another session that spoke to me as a Latina, the first in my family to go to college and having no one in my family understand what it is like to pursue a degree. The invalidation of personal experiences as a first generation woman of color makes it difficult to relate with others who are not of the same background. The Institutional racism in the school system is another burden students of color face in higher education. Achievement stress and the acculturation gap between families is very common in higher education. In this session, I heard more about the rise in mental health issues among Latinx, especially Latina women regarding drinking and thoughts of suicide. There is a high demand for Latina psychologists due to the fact that as a Latina, it is easier to interact with the Latinx community.

Black women are the fastest growing demographic of business startups, but make the least amount of revenue. A lot of this is not because of human capital among the business but about your network as an entrepreneur because it's not about what you know, it’s about who you know. The business motivation is not capitalistic, but giving back to the community. One of the greatest challenges black women entrepreneurs face with their startup is the lack of financial aid (investments, financial resources, and cultural capital). Dr. Cody shared stories of the double race and gender effect that a lot of her participants deal with in the workforce when it comes to closing a deal or pitching your business startup to investors. One of the startups she researched was, Happy Black Woman, was an example of how the race and gender standard applies. It turned out to be a successful business after many people doubted it because of the name. Some ladies in the room shared that when they were about to close a deal, and met face to face, the deal wouldn’t close because they saw a black woman. Dr. Cody calls for an approach to redefine entrepreneurship.

NCORE validated my college years, and allowed me to view them as normal. It was inspiring to see a Latina with a doctorate degree presenting her research; it gave me hope in my future and that of all other students. I was able to understand my story through professionals of color. As an aspiring entrepreneur I was presented the possible obstacles that I will face in my career as a woman of color. As an individual I was inspired by all the success stories and I am ready to change the world.