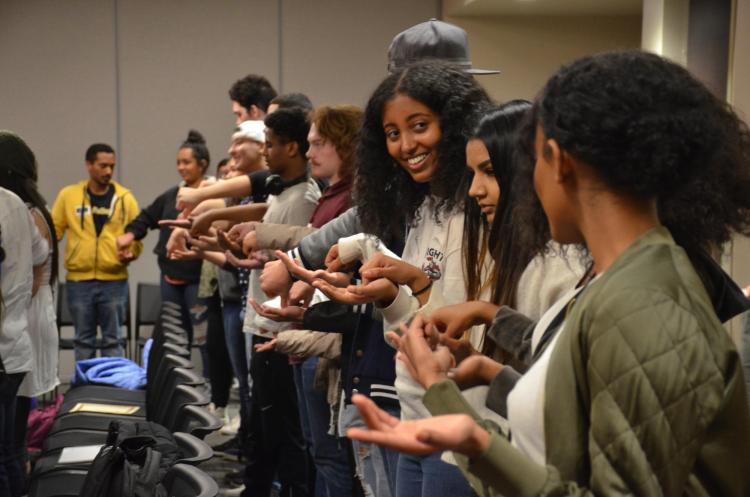 Take 2 was a pleasant surprise. Going in, I am sure most of the freshmen shared the same feelings I did about the event. I didn’t want to be there and I was planning on maybe leaving early. The mood certainly changed through the evening, not just for me but in the entire room. The awards kicked it off well. There were three of them. They had academic achievement awards for those who earned GPAs above 3.3, then those who were 3.7 and above. The other award was for those who were most present in giving to the community. These awards showed that hard work does not go unnoticed. The awards were followed up by the icebreaker activity: The Concentric Circle. Everyone in the room got into two circles: one on the inside and one on the outside, with everyone facing each other. It was a timed activity aimed to spark engagement between the people facing each other. We rotated so that everyone had the chance to talk with each other. Some of the questions asked were, “How has your freshman year been at CU?” “What is the most challenging thing you have had to navigate through this year?” In a weird way, this activity actually did the trick in getting us to talk. However, the structure did not hold up because by the end of it people were just having natural conversations with anyone near them in the circle. It was an accidental breakthrough that just showed that this community is a real thing. From there, the night only got better. There was a mini play. The Interactive Theatre performance hosted by Rebecca Brown Adelman and Trent Norman of Affinity Arts Consulting was insightful and I think it really woke up most of the freshmen. There were 2 actors, one black man and a white woman. They acted through some typical problems college students have, and attempted to put each other in the other’s shoes. The guy talked about what it was like to be a black man on a predominantly white campus. He was blocking out his female friend thinking she could never understand any of his struggles. While she could never fully understand, it didn’t mean she did not have struggles of her own. After all, she is a woman on campus, and that comes with its own struggles. They also discussed navigating the pressures families put on them in college, as well as stereotypes. The clear theme was everyone struggles, so why spend time focusing on who is struggling more and the things that separate us when we should be focusing on what brings us together: our mission to succeed. In the end we asked them questions in and out of character to understand more of what was going on. That discussion and interactive theatre was all we talked about during dinner. It turns out we all watch each other. We think the other person has things figured out while we are struggling, when all the while the other person thinks the same about us. It turns out no one was alone. The masks certainly came off in the end. Kids were telling each other their struggles and how they kept everything to themselves because they thought no one was in the same boat. We all saw each other in a new light. For what I would say was the first time as freshmen, we were operating as a true community and it really seemed like it was the spark needed to keep us open going further. Take 2 was a huge turning point for the future. I hope your experience will be as powerful as mine.