How do mammalian cells make the choice between proliferation (cell-cycle progression) and quiescence (cell-cycle exit)? Correct execution of the proliferation-quiescence decision is important in many biological settings, from developmental processes to adult tissue homeostasis, and dysregulation of this decision occurs in nearly all cancer types. Yet despite clear medical relevance, we have a limited understanding of the inputs that control the choice between proliferation and quiescence, when during the cell cycle cells integrate the presence or absence of these inputs, and how cancer cells rapidly rewire this program to escape quiescence induced by targeted cancer therapies. To tackle these issues, the Spencer Lab has developed cutting-edge cell biology methods, including novel fluorescent biosensors, multi-day time-lapse microscopy, and automated single-cell tracking, providing us a longitudinal, multigenerational view of cell-cycle behavior. We also pioneered the automated pairing of live-cell microscopy with subsequent fixed-cell staining, which allows us to match each cell’s current molecular state with its history. Our work on the proliferation-quiescence decision has revealed remarkable heterogeneity in cell behavior even amongst cells in a uniform environment, as described below. 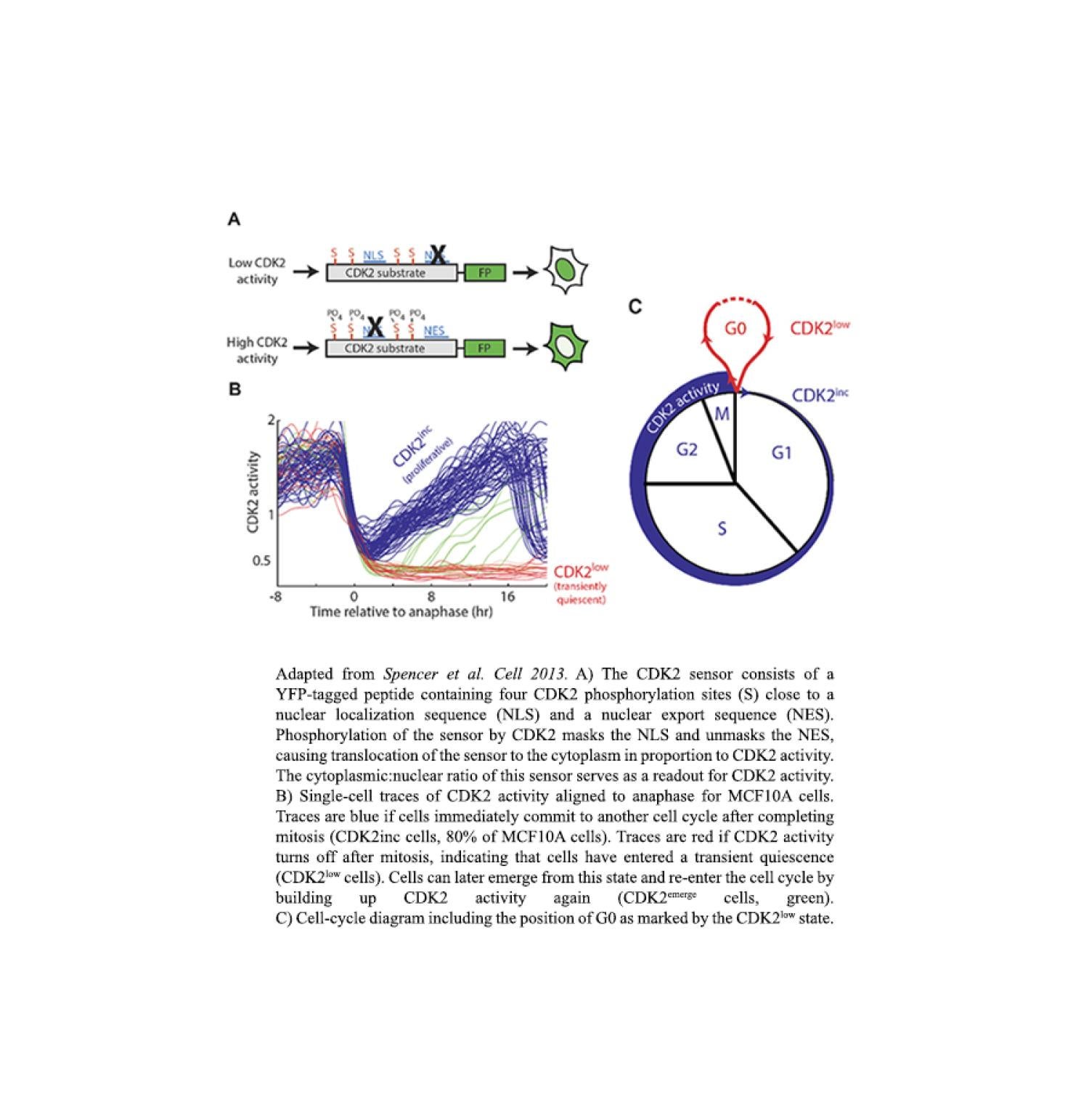 A bifurcation in CDK2 activity at mitotic exit

CDK2 activity is a key cell-cycle enzyme that mediates progression through the cell cycle. By designing a live-cell sensor for CDK2 activity (Fig 1A) and measuring CDK2 activity in single cells with time-lapse microscopy, we discovered a bifurcation in CDK2 activity at mitotic exit (Spencer et al. Cell 2013):  One subset of cells are born with increasing levels of CDK2 activity (Figure 1B, CDK2inccells, blue traces).  These CDK2inc cells are born committed to the cell cycle and are mitogen insensitive:  if mitogens are withdrawn even in very early G1, these cells continue to build up CDK2 activity and undergo mitosis.  The other subset of cells are born without CDK2 activity into a G0/quiescent state (Figure 1B, CDK2low cells, red traces).  CDK2low cells can later emerge from this quiescent state by building up CDK2 activity to re-enter the cell cycle (CDK2emerge, green traces) .  These quiescent CDK2low cells remain sensitive to mitogens:  if mitogens are withdrawn from CDK2low cells, they will remain in the CDK2low state and not re-enter the cell cycle (Fig. 1B).  In all cell lines we have examined thus far (including primary foreskin and primary lung fibroblasts), a fraction of cells always spontaneously enters the CDK2low quiescent state after mitosis, although the percent of cells doing so varies (Spencer et al. Cell (2013), Moser et al. PNAS (2018), Miller et al. Cell Reports (2018), Yang et al. bioRxiv (2020)). Together, this work shows that 1) This bifurcation in CDK2 activity represents the execution of the proliferation-quiescence decision.  2) The absence of CDK2 activity can be used as a live-cell marker for G0/quiescence (Fig. 1C). 3) The initiation of a buildup of CDK2 activity can serve as a marker for passage through the Restriction Point and thus passage through the Restriction Point can be visualized as the activation of CDK2. 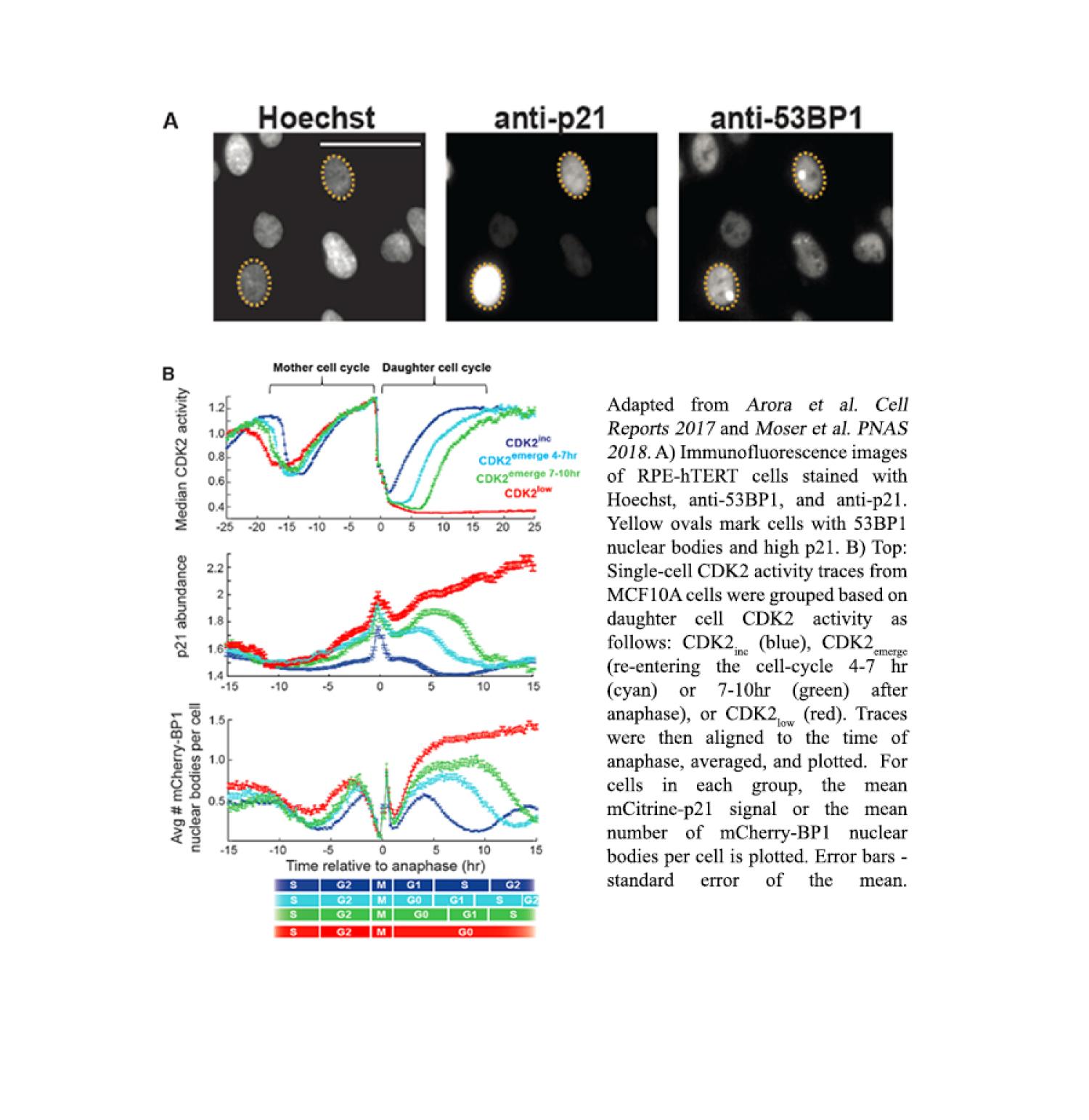 We have identified and characterized an unexpected and ubiquitous spontaneously quiescent subpopulation in proliferating human cell cultures, marked by low CDK2 activity. Spontaneous entry into the CDK2low state is caused by induction of p21 in G2 phase of the mother cell cycle (Moser et al. PNAS 2018), which itself is caused by DNA replication stress in the mother cell S phase (Arora et al. Cell Reports 2017) as well as activation of the Integrated Stress Response (Min & Spencer PLoS Biology 2019). This surprising finding indicates that cultured cells encounter much more endogenous stress than previously appreciated. 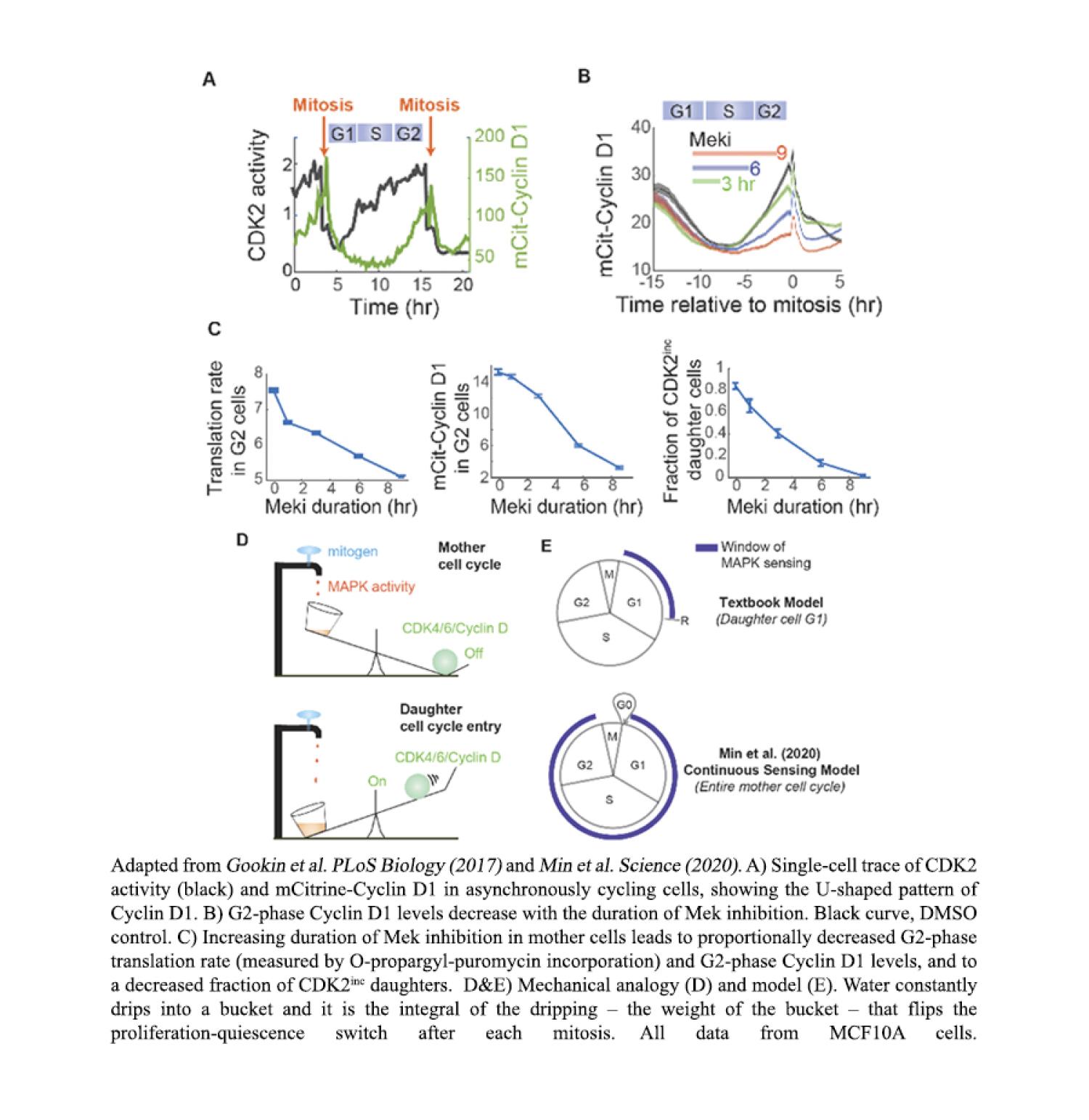 The proliferation-quiescence decision requires an elegant network to sense the cellular environment. We found that mitogen signaling is temporally integrated throughout the entire mother cell cycle to inform daughter-cell proliferation. In contrast to textbook models where cells sense growth-factors (mitogens) only in G1 phase before the Restriction Point, we found that cells continually sense and integrate mitogenic signals throughout the entire cell cycle. Each cell’s history of mitogen availability is converted into corresponding levels of Cyclin D in G2 phase of the mother cell, which determines the proliferation-quiescence decision in daughter cells (Gookin et al. PLoS Biology 2017; Min et al. Science 2020.) We thus uncovered a multi-cell-cycle memory system that integrates mitogenic signals to optimize cellular decision-making in fluctuating environments. 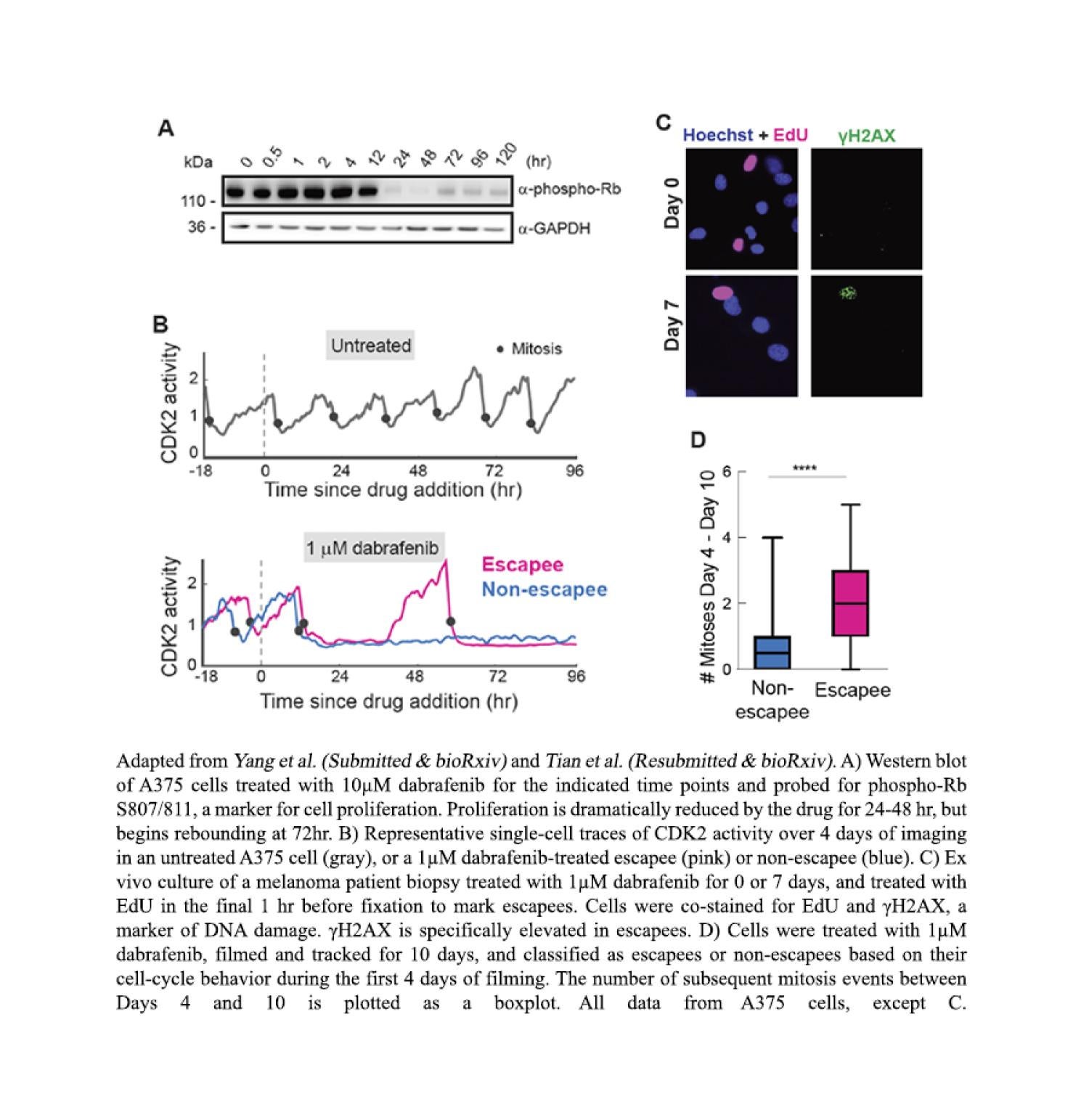 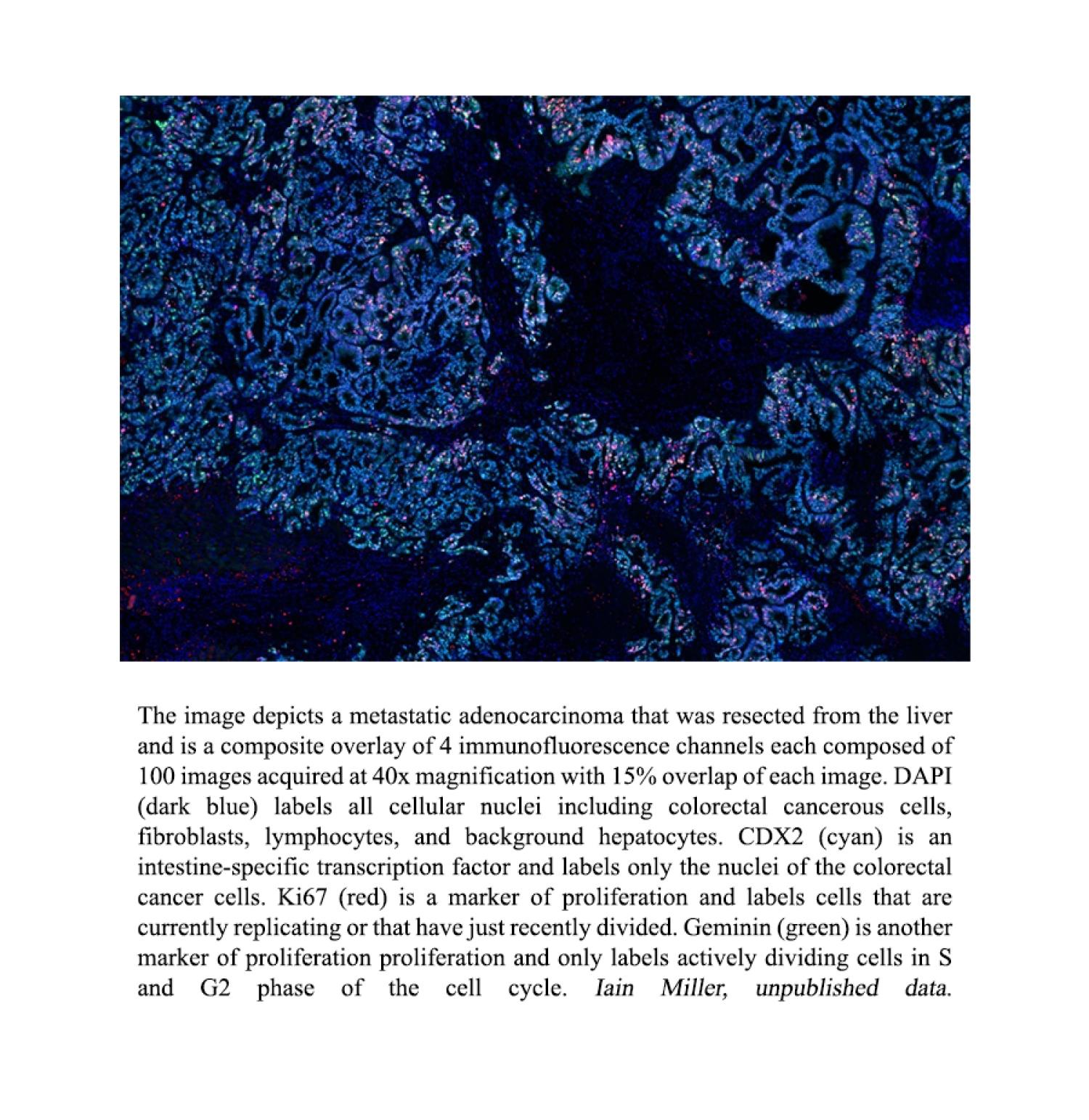 Analyzing the proliferation-quiescence decision in vivo.

First, by taking advantage of the invariant C. elegans cell lineage in collaboration with David Matus’ lab at SUNY Stonybrook, we have found a similar bifurcation in CDK2 activity that distinguishes actively cycling G1 cells and cells known to enter quiescence/G0 (Kohrman et al. bioRxiv 2019). Second, we found that human Ki67, a widely used clinical marker in oncology, is actually a graded rather than a binary marker of proliferation. Since Ki67 is degraded with stereotyped kinetics, it can be used as a marker for the depth of quiescence to predict how long ago a cell divided based on the current Ki67 levels (Miller et al. Cell Reports 2018). We have initiated a blinded observational study with a surgical oncologist (Ana Gleisner) and a pathologist (Antonio Neto) at University of Colorado Medical School to determine whether precise Ki67 quantification in patient biopsies could better inform tumor prognosis and treatment.