Total internal reflection fluorescence microscopy (TIRFM) allows us to image millions of individual molecules dynamically at solid/liquid and liquid/liquid interfaces.  As with all single-molecule experimental methods, these experiments go beyond understanding the average behavior of adsorbates and enable us to probe variability in surface chemistry, molecular conformations, and adsorbate dynamics.  Making such measurements, we often find that the behavior is much richer and more interesting than previously suspected.

Dynamics of Proteins on Surfaces

Protein adsorption at the solid-aqueous interface is a widely studied and very complex phenomenon, with applications including biocompatible materials, protein separations, biosensing, and biopharmaceuticals. We are interested in exploring the mechanism by which proteins adsorb to, diffuse on, and desorb from surfaces and the molecular conformations or aggregation states associated with these dynamics.  For example, we observed multiple fibrinogen residence time populations and multiple distinct diffusion modes at an interface.  By correlating these dynamics, on a molecule by molecule basis, these different dynamic populations were found to correspond to different oligomerization states (e.g. protein monomer, dimer or trimer). We have also employed intermolecular Förster resonance energy transfer (FRET) to observe the dynamics of protein-protein associations at the interface and found BSA-BSA associations to be heterogeneous, reversible, and highly dynamic. Similarly, we have used intramolecular FRET to monitor the dynamics of protein conformation changes on different types of surfaces, such as glass, self-assembled monolayers, polymer brushes, and lipid bilayers. More recently, we have combined inter- and intra-molecular FRET to correlate protein conformation (i.e. ligand) with receptor binding. A better understanding of the mechanisms involved in protein adsorption, protein layer formation and cell receptor binding ultimately can inform the design of all surfaces that come in contact with proteins.

In MAPT, a time series of images is obtained using single-molecule TIFRM, and imaging processing is used to determine the locations of all the individual molecules. By tracking these locations through a time series, physical properties of probe/surface interactions (such as adsorption rates, local diffusion, desorption probability and surface coverage) are determined.  By distributing these events to appropriate locations on the surface, one can determine characteristic values as a function of position. The use of single-molecule localization makes the MAPT analysis intrinsically super-resolution and we have demonstrated resolution of ~100 nm in our un-optimized initial results.  In contrast with all previous super-resolution methods, MAPT can be used on any surface and provides absolute quantitative values of physical interaction properties. Homogenous surfaces can then be characterized and used as “calibration” points to connect small scale heterogeneities to specific surface chemistries.  Using such maps, we found the first experimental evidence for desorption-mediated diffusion at the solid-liquid interface.

Understanding molecular behavior under confinement is critical to various applications including biosensing, material synthesis, intracellular and extracellular transport, and a number of industrial separation processes.  In order to understand these environments, we have investigated systems ranging from surface crowding at the solid-liquid interface to structurally-induced confinement within synthesized materials.  Based on single molecule trajectories, we have characterized dynamics using a variety of empirical and model dependent analyses.  For example, it was discovered that poly(ethylene glycol) chains exhibited behavior consistent with the generalized continuous-time random walk model over a large range of surface coverage, from the dilute to well above the surface overlap concentration.   Additionally, the polymer molecules had three distinct regimes of dynamics as a function of surface crowding, as shown by measurements of short-time diffusion coefficients, mean squared displacement, and surface waiting times.  In other experiments, nanoparticle trajectories in porous polymer membranes were analyzed in order to measure the tortuosity of the membrane, which was found to be a function of the operating conditions and not merely a constant value.  Moreover, distributions of the tortuosity indicated a large degree of spatiotemporal heterogeneity within the membranes, where anomalous, highly confined regions appeared to exist.  Further experiments investigating dynamics in inverse opal structures are currently underway, where individual particle trajectories are being investigated in the context of the narrow escape problem in order to provide a better understanding of confined diffusion in periodic nanostructures.

The unique physical and optical properties of liquid crystals (LCs) facilitate the transduction of molecular binding events into a measurable signal. We are interested in studying how conformational changes that occur upon nucleic acid binding (i.e. DNA hybridization and aptamer-ligand binding) affect the interfacial organization at solid and aqueous LC interfaces. For example, DNA hybridization involves a reduction in hydrophobic exposure which can induce LC reorientations at surfactant-laden aqueous/LC interfaces. Another area of interest involves studying ways to modulate fusogenic activity at aqueous/LC interfaces using specific binding events. These studies have the potential to lead to advanced biosensing strategies while also advancing the understanding of the molecular mechanisms that control bilayer/monolayer fusion. 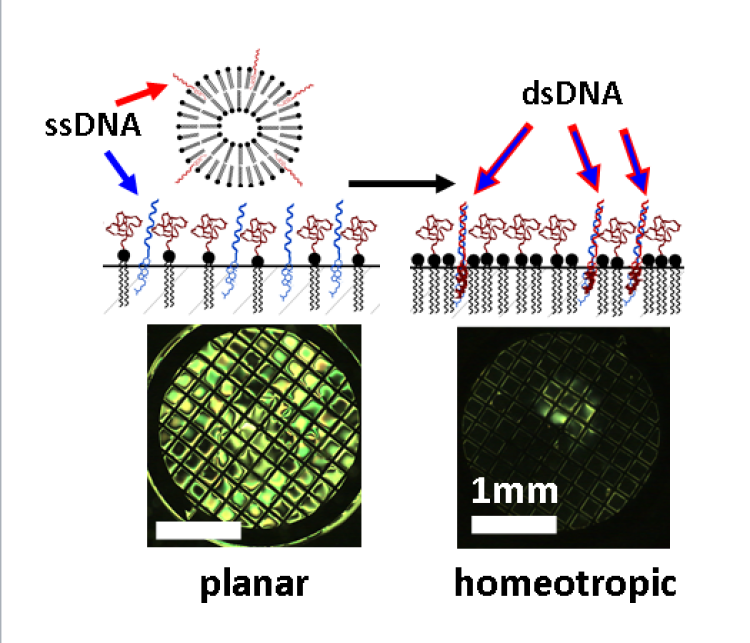 DNA hybridization between oligonucleotides anchored in dispersed liposomes and at an aqueous/LC interface promotes liposome fusion and induces LC re-orientation from a planar (left) to homeotropic (right) state.

Performing selective conversions of reagents with multiple functional groups is a challenging objective since each group can potentially adsorb and react on a catalytic surface. One approach involves the modification of supported metal catalysts with organic ligands such as alkanethiols. Alkanethiols can be deposited on metal surfaces to form organized self-assembled monolayers (SAMs) that can greatly alter surface chemistry and potentially be used to significantly enhance selectivity of traditional catalytic systems. We have recently shown that such a strategy can be applied to technical supported catalysts such as Pd/Al2O3. This attachment strategy was found to dramatically enhance the selectivity to the desired products during furfural  hydrogenation from < 5% on uncoated catalysts to > 90% on SAM coated catalysts by selectively blocking sites associated with the undesirable reaction pathway. By understanding how these ligands interact both with the surface as well as the reactants, we aim to tune their molecular structure to promote specific interactions for enhancing product selectivity.