We have 3 ongoing areas of investigation: 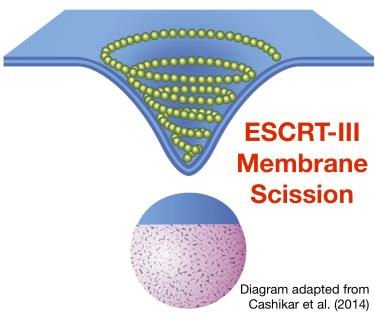 Membrane scission reactions separate membrane-enclosed carriers and are vital to molecular content exchange.  The ESCRT-III complex executes membrane scission in multiple different cellular processes, including cytokinesis (where ESCRT-III cleaves the membrane bridge connecting daughter cells) and the budding of HIV-1 and other retroviruses (where ESCRT-III is recruited by viral proteins to cleave the membrane that tethers virions to the plasma membrane of infected cells).

At endosomes, ESCRT-III executes membrane scission required for the budding of vesicles into the compartment lumen.  These intralumenal vesicles (ILVs) are degraded when endosomes fuse with lysosomes.  The cargoes sorted into ILVs include ubiquitinated transmembrane proteins that are targeted for degradation.  Thus, ESCRT-III has a central and essential role in protein turnover.  The mechanism and regulation of membrane scission by ESCRT-III is poorly understood.  Defects in ESCRT-III activity are linked to cancer and neurodegenerative disorders.  Our objective is to define the machineries that control ESCRT-III activity.

Our most recent publication in this area: Buysse, D., West, M., Pfitzner, A.-K., Roux, A., and Odorizzi, G. (2019) Doa4 interferes with ESCRT-III remodeling factors to inhibit the membrane scission mechanism. Under review. 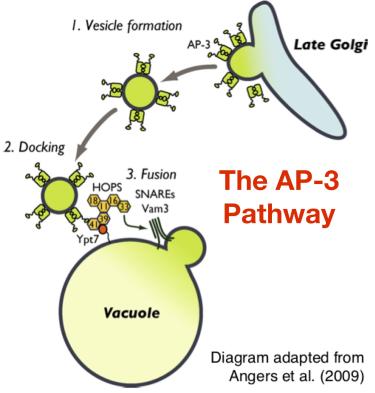 The Golgi complex receives newly synthesized proteins and lipids from the endoplasmic reticulum and then modifies these molecular cargoes before sorting them to multiple different destinations throught the cell.  The Golgi complex is comprised of multiple individual compartments known as 'cisternae' that can be functionally subdivided along a continuum of early and late compartments.  Generally, cargo modifications occur in early Golgi cisternae, while late Golgi cisternae sort the cargoes into distinct transport vesicles that bud from the late Golgi and fuse with specific target organelles.

The nature of the cargo packaged into each of the transport vesicle types is dictated by the molecular identifity of the 'coat protein' that surrounds the cytosolic surface of the transport vesicle.  AP-3-coated vesicles carry transmembrane proteins that are targeted to the membrane of lysosome-related organelles.   Little is known about the regulatory mechanisms that govern AP-3 function.  Defects in human AP-3 activity are linked to bleeding disorders, dendritic cell dysfunction, and neutropenia.  Our objective is to identify the mechanisms that control AP-3 trafficking.

Our most recent publication in this area: Plemel, R., Odorizzi, G., and Merz, A. Genetically encoded multimode reporter of AP-3 traffic in budding yeast. Under Review. 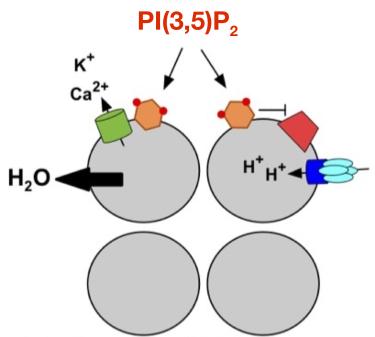 Phosphoinositides are phosphorylated derivates of phosphatidylinositol membrane lipids that are embedded in the cytosolic leaflet of organelle membranes.  Different phosphoinositides are synthesized at different organelles.  Phosphoinositides generally function by interacting directly with proteins at the organelle membrane, which results in regulation (positive or negative) of the phosphoinositide-binding protein.  Phosphatidylinositol-3,5-bisphosphate [PI(3,5)P2] is synthesized at late endosomes and lysosomes, where it has poorly understood roles in controlling organelle physiology as well as overall cellular physiology.  Defects in PI(3,5)P2 regulation are linked to a variety of neurodegenerative diseases.  Our objective is to define the regulation of PI(3,5)P2 and to identify the organellar mechanisms it controls.