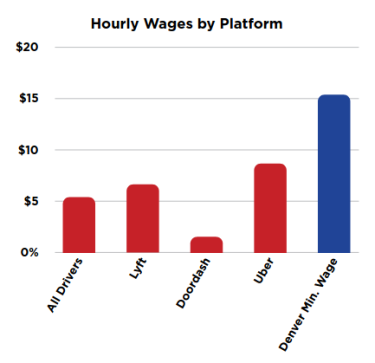 $5.49 per hour. That’s how much, on average, rideshare drivers in the Boulder-Denver Metro area earn, per hour, after accounting for expenses. In contrast, the minimum hourly wage in Denver is as of 2022 is $15.87. Rideshare drivers, unlike minimum wage workers, are independent contractors which means that they are not entitled to minimum wage. In addition, as independent contractors, rideshare drivers are liable for the covering the expenses associated with “being your own boss.” These hidden costs are what eat away at drivers’ wages. However, systematically tracking these hidden costs and using this information to develop a counter narrative to rideshare platforms’ claims about workers’ wages is a technically difficult task.

Rideshare workers face significant barriers in accessing employer-owned documentation of their working conditions as well as communicating about these conditions with fellow drivers due to the isolated and distributed nature of their work. This prevents them from forming shared narratives, articulating workplace issues, and collectively organizing for workplace justice. Additionally, workers do not have access to the data assets which they create as a by-product of their driving for rideshare apps. As a result, rideshare companies hold the exclusive ability to shape the conversation around working conditions utilizing data narratives built on driver data assets as their source of evidence.

To overcome rideshare companies’ enclosure over drivers’ data assets, we partnered with The Drivers’ Seat Co-op, Colorado Independent Drivers United, and Colorado Jobs with Justice and developed a methodology for capturing accurate data about drivers’ earnings. To gather wage and expense data, we utilized a data cooperative third party mobile application, called Drivers Seat Cooperative (DSC). DSC is a California-based data cooperative that provides rideshare drivers with legible information regarding their wages and expenses through a mobile application that tracks the distance and time spent driving. Data gathered through DSC was used, in conjunction with a representative survey of over 300 rideshare and delivery drivers in Denver, to draw conclusions about drivers’ net wages.

We found that on average, drivers take home $5.49 in hourly wages after accounting for expenses such as vehicle wear and tear, vehicle lease payments, interior cleaning and maintenance, provision of personal protective equipment, and unremunerated time spent going to and from rider pick up location. You can read more about the full findings in the report and the methodology for calculating net wages from the DSC trace data.

Upon publication of our results in The Guardian, spokepeople from Uber, Lyft, and DoorDash contested our findings claiming that the hourly wage for drivers, according to their data ranged between $25 and $37 per hour. Importantly, none of the spokespeople elaborated on how expenses drivers incurred affected their hourly wages. Additionally, the claims from the rideshare platforms align with our findings: before incorporating calculations of expenses the average wage ranged between $19 and $50 per hour based on trace data acquired through DSC. However, after accounting for the expenses that drivers must pay in order to work, earnings decreased dramatically.

Rideshare companies’ claims about flexibility, independence, and potential earnings must be scrutinized. Because these companies hold a monopoly over access to official driver data, including time spent driving, waiting for rides, and distance driven, it is difficult to contest their narratives. Through a community-based approach, we engaged in grassroots data gathering to better understand the true costs associated with “being your own boss.” Access to—and control over—data is essential for workers to shape the public narratives and legislative agendas about their work.