Explorations in Governance for Mutual Aid

On December 5, 2020, we met with key stakeholders from the Rocky Mountain Mutual Aid Network (RMMAN) to discuss the organizational structure and potential future impact of RMMAN. The stakeholders at RMMAN worked to answer questions about RMMAN’s organizational design: How are decisions made? Who makes the decisions? Who gets to decide who can join the group? These types of questions help an organization understand how to handle issues, how to get work done, and how to prevent potential bottlenecks that lead to inaction.

The meeting began with introductions. Of the roughly twelve people present, most represented RMMAN. RMMAN was formed by people who had organized as the Front Range Mutual Aid Network (FRMAN), before creating a new entity separate from FRMAN. Both entities emerged in 2020 in response to the economic and social impacts of the COVID-19 pandemic.

After introductions, the group moved to an individual exercise, as members were asked to think about and describe the way they see RMMAN’s current organizational structure. To aid this exercise, the group used the “Create” feature on CommunityRule, a MEDLab online tool that helps users create a visual representation of an organization’s structure.

Examples of RMMAN structure as imagined by stakeholders at the December 5 meeting: 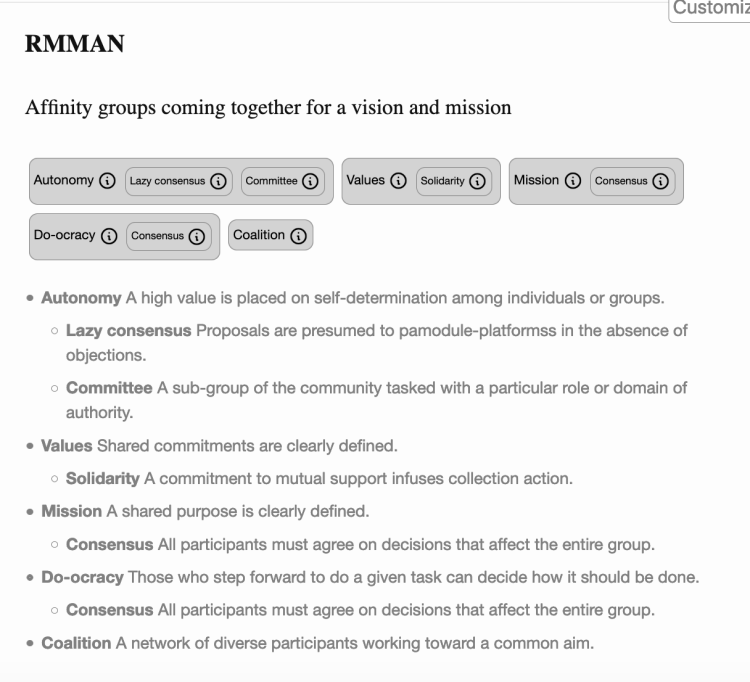 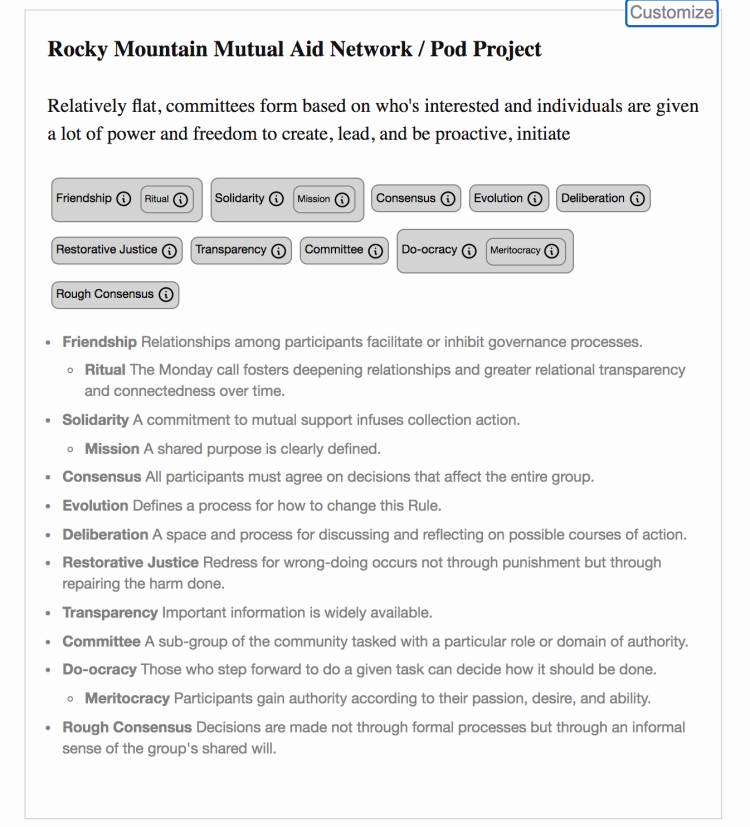 A few common themes that emerged from this exercise included friendship, do-acracy, and autonomy. Many of the RAMMAN stakeholders echoed the sentiment that decisions should be made together and out of goodwill, but there is also a strong belief in getting things done, which means members should be allowed a certain amount of autonomy to simply do what needs doing. Another theme that appeared in this exercise was the idea that the structure of RMMAN, as it currently exists, could do more to support groups and members and encourage continued participation once aid needs have been met. The group frequently mentioned the need to keep volunteers engaged over long periods of time and wondered how this could best be accomplished.

Stakeholders from RMMAN were asked to consider how decisions get made within the group and how, if a difficult decision needs to be made, the group handles the situation. At the moment, key decisions are made by the steering committee. Members felt that this process is working for now, but may represent a too centralized form of governance for the group as it grows. The need to both decentralize command and ensure decisions are made by the right stakeholders was repeated by a few members and will warrant further discussion as the group moves toward a more formal organizational structure. A common fear is that the centralization that comes from the current structure may have been a primary driver of drop-off and disengagement among volunteers. RMMAN would like to create a system for developing new leaders and giving them autonomy to make decisions and get things done.

The last exercise of the meeting asked RMMAN stakeholders to imagine the future of the organization and discuss what it looks like to them in five years, or ten, or a century. Many of the respondents voiced their belief that the small pods that are part of RMMAN’s current structure are an integral component of RMMAN’s future. For the stakeholders, Pods will be key to developing leaders and engagement, and through the pods connections can be established with other organizations and communities to further grow the influence and potential impact of RMMAN. The pods are seen as a way to integrate with other communities, balancing the needs of a regional network with small-scale accountability.

The group’s efforts culminated in a short discussion about next steps. All of the stakeholders agreed that it is important to them that RMMAN grows and is able to extend its influence and aid to others. Additionally, many would like RMMAN’s influence to grow to affect agendas set by the state and act as a well-intentioned adversary to unequitable legislature. Circles were discussed as a promising jumping off point for structuring RMMAN. This would provide a flat shape where decisions are made by those doing them, both a centralized and decentralized form of governance that has the potential to inspire engagement and organically grow new leaders. The most commonly agreed upon structure for decision making was a do-acracy, which encourages the people who are actually working on tasks to decide the best way and when to do those tasks. The discussion converged around a do-acracy-based circular structure of governance as the most promising direction for future exploration.